A Song and a River to Carry Us On


In this video Pete Seeger performs "To My Old Brown Earth." If you can't see the viewer above, click here to watch the video.


Always to be sung, the Torah is a song, so referred to even from within itself (Deut. 31:30, 32:44); and it is a river, the river of a people, “the brook that descends from the mountain” (Deut. 9:21). A song and a river, two touchstones of Pete Seeger’s life, each joining people together, voices raised as one, travelling together along the current, “far beyond the raging waters,” (River of My People) yes, “I can see our certain home.” Celebrating sunrise and sunset, partners in creation, the whole world in our hands, whether from the shores of home or from a vessel on the wave, Clearwater song, “still I’ll keep the dream,” kiss of spray as hope upon the brow, “my Hudson River and my country will run clear.” 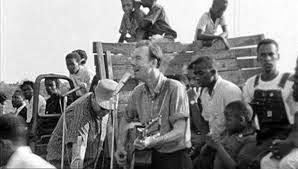 During my last year of rabbinical school, “long time passing…, long time ago” (Where Have all the Flowers Gone), time flowing to its source like the waters of the nearby Hudson, the soon to be rabbis of my class were asked for suggestions of people to receive honorary degrees at our ordination. Perhaps to come down to the bustling town from his place up the river a bit, I suggested Pete Seeger. I don’t think I ever received a response to my essay, as much a plea as a suggestion. I knew then and I know now that he accomplished so much of what should be ours to do, as rabbis, as people, as communities of people; to raise up the spirit, to bring people together across all the divides of our own making, to inspire us to act for the sake of justice, of peace, “I swear it’s not too late” (Turn, Turn, Turn), of goodness, and to sing truth to power in the face of all that demeans life and creation, to scatter seeds of hope on wings of song.

He encouraged people to sing, his concerts as hootenannies, however much people came to hear him. He helped others to find their own voice, the song of their own soul. It is the essence of what coming to a place of worship should be. He didn’t need the degree, but we needed his blessing. As a chorus that never ends, his blessing remains as a gift of his having been, shining with the twinkle of his eye, the warmth of his voice, expressed in so many ways, as at the end of the introduction to his songbook, Bells of Rhymney. “Yours for peace, freedom, jobs for all, lotsa good picking and singing, instruments that stay in tune, and people likewise.” I got the songbook, his signature on the cover, tickets still inside, at a concert he gave on my sixteenth birthday.

I woke up that morning to the news of Pete’s death, as did so many others, and, so too, as so many others, I cried as at the loss of a family member or close friend. He had been part of my life for as long as I can remember. If we worry for how to go on beyond one so present for so long, he sang and soothed the way, words I sang through the storms of adolescence and still do now at times of stress, “it takes a worried man to sing a worried song, I’m worried now, but I won’t be worried long” (Worried Man Blues). Growing up in a house of folk music and progressive politics, going to his concerts was a spiritual experience. My mother often cried at those concerts, even as we might on hearing the haunting melodies of Yom Kippur evening in the synagogue, soul touched deeply in the company of others. In either case, it is not the music in itself, even though it is, but the impact of song on soul, of people joined together, a reminder and reflection of what might be in the wide world all around. My mother’s joy overflowed when we first went to a concert with the next generation, hope unfolding; the song of life carried forth. Pete sang in harmony to the cycle of life, encouraging, soothing, that it might always be, and so it unfolded before him, singing the generations to each other, helping us all to embrace the unfolding of life, to live until we die, unafraid; encouraging, as from a Russian lullaby, “May there always be sunshine, may their always be blue skies, may there always be momma, may there always be me.” In whatever language he sang, he was of that people, and through song, he was of all people. Wherever he sang became sacred space.

Pete lived, worked, and sang to create a sanctuary of earth in which all people shall dwell together, in peace and unafraid, each with its own song, all learning to sing the chorus for another’s song. That is the message of the desert sanctuary/the Mishkan, its building beginning in the Torah portion of the week he died, the portion called T’rumah (Ex. 25:1-27:19). God says, v’asu li mikdash/and they shall make for Me a sanctuary/v’shochanti b’tocham/and I shall dwell among them. God doesn’t need a place to dwell, but yearns to dwell among us. It is about our own coming together and recognizing the presence of God in each other. The building of the Sanctuary becomes a model for so much that Pete stood for. It is as though all the people drawn to the task are one big union, no straw bosses or overlords, as we knew in Egypt. People are to give only as their hearts make them willing and only then as they are able, only the gifts of their own hearts. And every one has a role, none to be diminished, each one of equal importance, each one a stockholder and stakeholder in the national enterprise. No steel is to come upon the altar, the sound of the sword banished from the sanctuary of God. For the rabbis, the sanctuary was the world itself. And God waits. The sanctuary was a reflection of creation, the world and the human as vessels to be cared for with tenderness. All the details of its building lovingly described, curtains of brilliant hue, “Oh, had I a golden thread, and needle so fine, I’d weave a magic strand of rainbow design;” one teaching says, gold represents the sun, silver the moon, and in the intermingling colors of the setting sun there is copper. Another teaching compares the details of the sanctuary to the miracle of the human body, the greatest sanctuary; gold represents the soul, and silver the body, and copper is the voice of Heaven (as carried within each one). It is for us to protect and care for each other and the earth we share. 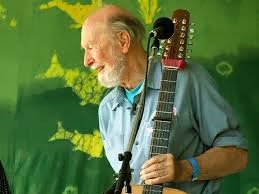 And in time we return, each one, “To My Old Brown Earth,” Pete’s song of life even in death, a song of love and hope for those to come:

To my old brown earth and to my old blue sky, I’ll now give these last few molecules of “I.” And you who sing and you who stand near by, I do charge you not to cry. Guard well our human chain, watch well you keep it strong as long as sun will shine. And this our home, keep pure and sweet and green, for now I’m yours and you are also mine.

Thank you, Pete, for the teaching of your life, a song and a river to carry us on.