Bill Moyers conducted an interview recently with a rather reclusive but amazingly articulate farmer by the name of Wendell Berry. He has spent his lifetime farming on the same Kentucky land that has been in his family for two hundred years. Besides farming, he writes.

His first and perhaps best known work, written in 1977, was "The Unsettling of America: Culture and Agriculture." In it, Berry argues that good farming is about culture. Farm culture functions in a context of community. Good farming values human labor. It respects nature and the land. It is concerned for the next generation and it is a spiritual discipline. Berry believes agribusiness removes farming from its cultural context, under an economic system dedicated to the mechanistic pursuit of products and profits.

The interview is one of those experiences where you come away believing there is still such a thing as common sense, the wisdom of elders and concern for the common good. Held at St. Catharine College near Louisville, KY the interview tape is accessible on the internet and if you are able, you should watch it.

Since you might not, there is a response to one question that deserves sharing here. Berry uses the phrase "grace of the world" in one of his best known poems, "The Peace of Wild Things." Moyers asks him about that word "grace." It gives Berry an opportunity to express something of his religious convictions about our relationship to the earth. This is what he says.

"People of religious faith know that the world is maintained every day by the same force that created it. … All creatures live by breathing God's breath and participating in his spirit and this means the whole thing is holy, the whole shootin' match. There's no sacred and unsacred places, there are only sacred and desecrated places."

And because of that conviction about the holy, Berry says this about our efforts to stop the desecration. "We don't have a right to ask whether we're gonna succeed or not. The only question we have a right to ask is what's the right thing to do. What does this earth require of us if we want to continue to live on it."

Aware of how coal is mined these days, by blowing off the tops of mountains, his convictions led Berry, at 80, to a sit-in at the Kentucky Governor's office.

Now I'm aware that Berry is not alone in his convictions about agriculture. There are still men and women all over the state of South Dakota and throughout the world who still have a sense of farming as agri-culture. They carry that vision in a world where the principalities and powers are heading in just the opposite direction. These farm folk still believe there is something sacred in the land that will nourish and sustain future generations, if only it is treated with respect. They still attend rural churches, believe they set foot every day on God's good creation. They contribute to the well being of their community and their neighbors. They work hard and provide for their families in both sustenance and values. I know many of these people. I've seen them at work and play and in church.

Many of these folks share with Berry the Gandhian notion that tools are meant to be an extension of the human hand, or foot, or brain … not a replacement. Sometimes the fruits of technology are better left alone, not that we shouldn't know things but everything doesn't have to be implemented. We know smoking causes lung cancer but must we smoke? 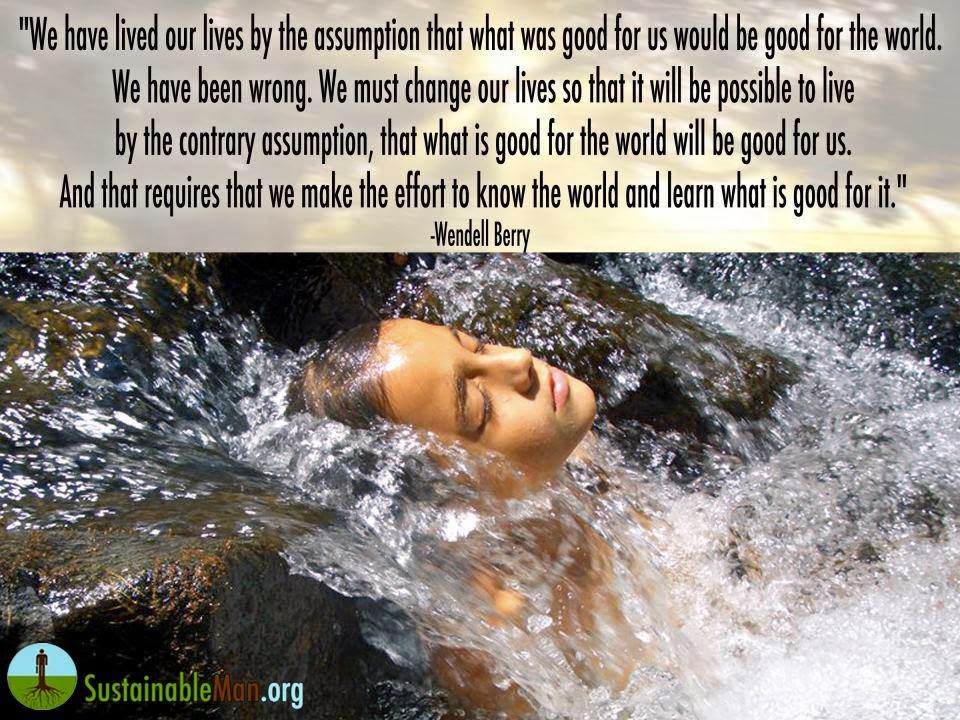 As we continue to pretend that we know better than the creator how to sustain life on a finite planet, tinkering with moving DNA from one organism to another and poisoning living things with substances new to nature, we shouldn't be surprised that there may be some unexpected results. I'm grateful for the prophetic voices of people like Wendell Berry. He speaks his mind and shares his wisdom and faith. He also recommends the most appropriate place for finding healing from the cares of the world. It's in "The Peace of Wild Things." It's a poem you don't want to miss, especially if you know the serenity of a mountain stream in the Black Hills, or the solitude of a pasture sprinkled with flowers at sunset, or the special spot in the trees you retreated to as a child.

The wild places are still sacred. They can heal and give hope for a rebirth of wonder and wisdom.