It takes character to advocate for nonviolence when you have been a victim of violence. Sometimes it's difficult to shake off the hate for your violater. Sometimes it's impossible to keep a positive attitude about life and love and keep hoping and working for a better world.

Gabby Giffords, the Democratic member of the U.S. House of Representatives who was gunned down three years ago, is a person of character with a positive attitude. On the third anniversary of the shooting, that killed six and injured twelve others, Giffords went sky diving. It was her way of telling everyone what really mattered. "I'm alive," she said.

This is a letter she wrote to folks supporting her organization about the anniversary and the hard work ahead creating a less violent society.


"Three years ago today, a gunman walked up to one of my Congress on Your Corner events, shot me in the head, killed six of my constituents, and wounded twelve others. 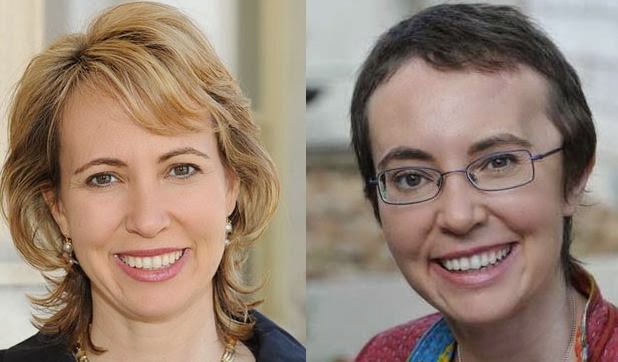 I've spent the last three years learning how to talk again, how to walk again, and how to sign my name with my left hand. It's gritty, painful and frustrating work, every day. It's never easy because once you've mastered some movement or action, you move on to the next. There is no rest.

Along the way, I’ve learned that our campaign to change our gun laws has a lot in common with my difficult rehab.

Every day, we must wake up resolved and determined. We pay attention to the details, looking for opportunities for progress, even when the pace is slow. And every day we recruit a few more allies, talk to a few more people, and convince a few more voters. Some days it comes easy, and we feel the wind at our backs. Other times, we tire of the burden.

I know this feeling … but I know that we’ll persist.

Since the shooting, eight days into the new year is when I mark my own new beginnings and make my annual resolutions.

One year ago today, Mark and I started Americans for Responsible Solutions and made it our mission to reduce gun violence in a way that was consistent with being gun owners ourselves.

This year, I resolve to draw strength from the Americans who have joined our fight, and cede no ground to those who would convince us the path is too steep, or we too weak.

Over the last few months, I have achieved something big that I’ve not spoken about until now. Countless hours of physical therapy - and the talents of the medical community - have brought me new movement in my right arm. It’s fractional progress, and it took a long time, but my arm moves when I tell it.

And maybe that’s what it will take to change our gun laws — determination, teamwork, and incremental progress.

But I know we’ll get there, and I am thankful we’re in it together." “Oh, wonderful sky. Gorgeous mountain. Blue skies. I like a lot,” Giffords told TODAY’s Savannah Guthrie in an exclusive interview about her skydiving adventure. “A lot of fun. Peaceful, so peaceful.”