Leaving Room for the Other to Move

Among the painful memories of childhood for me are those of sandlot and schoolyard fights. The images still make me wince, groups of small boys, and later not so small, ganging up on one among them, bravado and proving of oneself at the expense of another. Whether of primal origin or a tragedy of socialization, it is brutal behavior transmitted through the generations that has far reaching consequence. Beyond the personal scars that are carried, small boys grow up to be men primed to fight, and it becomes the way of nations. Not a way that is learned at the breast, gentler generations of fathers and greater awareness of the dangers of bullying today offer hope toward breaking the cycle of violence, but there is so far to go. Mostly I stood back then, unsure what to do, no words to describe the torment of uncertainty, wanting to save the unfortunate child, sometimes being that one, on at least one occasion, remembered with shame, drawn in to be an aggressor. The worst moment in these primal contests, still remembered vividly, came as the terrified victim cried for mercy, and the crowd yelled, “Make him say uncle.” And then it would continue, even after “uncle” had been sobbed out, “uncle who, uncle who?”

These images came to me this week amid congressional debate on Iran. Calls to increase sanctions came as echoes from the crowd in the sandlot halls, “make him say uncle.” There were times back then when the humiliated and bleeding child may indeed have said or done something to cause insult, perhaps at another time having been the aggressor, lending to the moment a sense of just deserts. But belligerence and brutality never make sense. Among nations, there are times when sanctions are an effective tool, offering a nonviolent response to bad behavior. Sanctions have made far more sense in helping to shape Iranian nuclear ambitions than war and the cascade of violence sure to be spawned in its wake. The crux, however, is in the framing of sanctions, nonviolent only if enacted in a manner that affirms the humanity of the other and allows a way out of the bad behavior. Whether brought about through the economic impact of sanctions to this point, or concurrently as a reflection of Iranian desire to be more fully welcomed in the family of nations, it is clear that change is happing in Iran. It has been made clear through the recent negotiations and through speeches and messages to the world. To call now for increasing sanctions is to give no way out, to deny and defeat the very goal of sanctions. If sanctions have helped to bring the change in tone from Iran, to call for more sanctions now is akin to the crowd yelling, “uncle who, uncle who?”

Leaving room for the other to move, not to be pinned to the ground, is essential for nonviolent change and conflict resolution. Stepping back from one’s own position of power in order to allow the other to find a way forward with dignity is the only way to break the cycle of violence. It is also the way of justice, the seedbed of peace and security for all. To add new sanctions at the moment of coming so close to meeting the goal of sanctions already in place pushes Iran into further isolation, increasing the likelihood of war and the development of an Iranian bomb. As though another scene in the same script as it played out this week, Israel’s unabated settlement policy leaves no room for Palestinians to move, for there still to be land for a Palestinian state, without which, two states together, there shall be no peace. It is all about learning to leave room for the other to move, allowing, eventually, for movement toward each other. 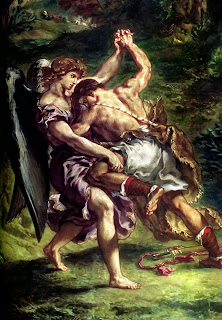 So ancient and so immediate, it all unfolds in the weekly Torah portion, Parashat Vayishlach (Gen. 32:4-36:43). In what becomes preparation toward reconciliation, Jacob wrestles in the night with a mysterious figure prior to his first encounter with his brother Esau after twenty years apart. Jacob had fled from Esau’s threat to kill him for stealing the birthright of the first-born. Reminding us that this is far more than a story of long ago, the Slonimer Rebbe emphasizes that the Torah is eternal and teaches us a way of going, eych l’hitnaheg/how to conduct ourselves.

We learn a way of going in regard to conflict, how to conduct ourselves toward a greater good, as Jacob limps away from the night wrestling. Was it an angel, the spirit of Esau, his conscience, perhaps all of that and more? His hip having been dislocated by his opponent, he was in pain as morning came. The rising of the sun brought healing for Jacob, and yet he limped. In a powerful teaching that a rabbinical student drew me to, the Ha’emek Davar, Rabbi Naftoli Tzvi Yehuda Berlin, suggests that with his pain dissipated, Jacob was surprised that he could not walk as he had before. He thought that he had been entirely victorious and had not suffered at all at the hands of the other. He now realizes that the angel had also overcome him somewhat, as well, that they had each overcome the other in the course of struggle. From Jacob’s wrestling with the angel in anticipation of his encounter with his brother, the Ha’emek Davar then guides us in the way of conflict resolution that is rooted in leaving room for the other, not to inflict undue pain and humiliation, that resolution once achieved shall last: This comes to teach us how to conduct ourselves with an opponent, that we not compete excessively/she’lo l’hitacher imahem b’yoter; and when the fear (which gave rise to conflict) passes, it is seemly to give pause to the pursuer to go on their way/l’haniach et ha’rodef leylech l’darko…. 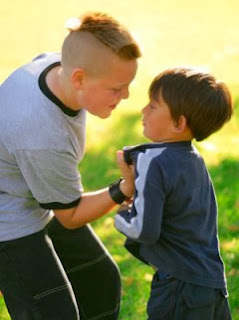 For all the distance between Congress and schoolyard and sandlot bullying, there is a common thread. It is the elusive challenge to resolve conflict peaceably, to recognize the humanity of the other without threat to our own sense of self. Sadly, there is no monopoly on self-righteous claims to the rightness of one’s own view, and there is a short gap from the spark of belligerence to the igniting of violence. There is a clear danger in Iran’s development of nuclear weapons, but so too, a dangerous hypocrisy in failing to see the ultimate danger of nuclear weapons in any hands. Iran’s belligerent words toward Israel require response. Ever more sanctions, and most certainly a military response, will bring exactly the kind of conflagration that is feared, bolstering Iran’s will and justification toward developing a nuclear bomb. The efficacy of sanctions as response requires recognition of change when it occurs and the corresponding easing of sanctions as the goal is reached. Not to do so, and even worse, to increase sanctions in the face of change, offers no incentive to further change. Belying any morality of motive, forcing a cry of “uncle” casts us as the bully and plants the seeds of further violence. Toward the flowering of peace and reconciliation, may we recognize the change we seek when it appears before us and do all we can to nurture it to fruition.

Rabbi Victor H. Reinstein
Posted by Carl Kline at 9:30 AM

Great to see this kind of blogs and your blog contains really astounding info to read. thanks for the great post.