My wife reminded me that our kitchen faucet was leaking. Since I've made an effort recently to respond to minor household emergencies quickly, and since I was aware of the dripping for a few days, I got right on it.

After taking the top off I discovered that the part that was likely the problem was different from any I'd ever seen before. It must have been installed by the plumber the last time I couldn't stop a leak. In years earlier, all I had to do was replace a little rubber ring and it would work as good as new. But since the inside of faucets have become more complex, with the interior parts all of one piece and costing ten bucks, I'm even less handy than before.

Still, I tried. I went to the hardware (do it yourself) store to get a new piece. I took the old one with me so I could get a match. After looking for the part for about ten minutes and not finding anything like it, I asked for help. The clerk took me to a different aisle and found one with some modest differences. I bought it. Did I mention it cost ten bucks?

It installed easily. I turned the water back on and bingo, there was no dripping. So I put my tools away, congratulated myself, and waited for my wife to come back so I could proudly point out to her that the dripping faucet was fixed.

Alas, before she got back, I turned on the faucet to wash my hands and the drip was still there. It was as bad, or worse, than before. So I got out my tools again, worked at tightening everything down and stripped some threads. Defeated (I called it the third strike), I put things back together as best I could and waited for the inevitable admission of failure.

It got me to thinking about water. My Lakota friend tells me that water has rights, just like humans have rights. One of the rights of water is to flow where it will. If we don't recognize this right of water, it may cause us difficulty. Certainly it does!

Consider basements wet after a heavy rain. Or how about what happened to those folks in Vermont as a result of hurricane Irene and along the Jersey Shore during hurricane Sandy. Some folks are still recovering from the flooding along the Missouri a couple years back and imagine all the time and money they'll need to spend in Colorado after the recent flooding there.

Boulder County, Colorado was hit the worst with over 9 inches of rain on September 12 and up to another 17 inches recorded by September 15. The annual, average precipitation for Boulder County is about 21 inches. That's annual, in a year! So in 4 days Boulder County got more than the usual rainfall in a year. 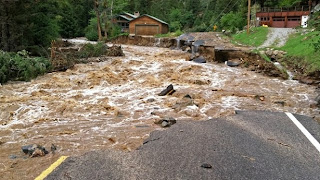 This water went exactly where it wanted to go. And it took 1,500 homes with it and damaged another 19,000. There are at least 30 state highway bridges destroyed and another 20 badly damaged. Miles of roadway and rail lines were washed out or submerged. The flood waters covered about 200 miles from north to south and did damage in a total of 17 counties. To make matters worse, some of the 1,900 fracking wells in Colorado were flooded and the Colorado Oil and Gas Conservation Commission reported it was tracking 12 spills, 14 sites with evidence of small spills and 60 sites with visible damage to storage tanks.

Water goes where it will and if it's polluted with all manner of toxic chemicals or with oil and gasoline, watch out. Fracking generated some 280 billion gallons of toxic waste water last year while drilling 80,000 wells across the country. That's enough toxic waste water to flood all of Washington, D.C. twenty two feet deep.

It's ironic that the South Dakota Peace and Justice Center scheduled their annual meeting in Rapid City, S.D. but cancelled as the weather forecast got worse. The theme of the meeting was "water," that resource we all need and want, in our bodies, our fields, and our faucets. But the water that was falling in record amounts as snow, meant members had to sit at home and reflect on why so much moisture was falling again, rapidly, in one place.

When questions arrive my way I have a favorite place to look besides the internet. The Brookings Library always seems to have some interesting new books on that shelf just inside the door. As I glanced that way the other day, I noticed the latest book by Bill McKibben called "Oil and Honey." McKibben answers the question of big rains and weird weather for me.

We are experiencing a warmer climate. There is about 5 per cent more moisture in the atmosphere than in the past. So when it comes, rain comes in buckets and the water flows where it will.

Some folks are beginning to call these events like Sandy and the Colorado flooding and the terrible wildfires "Biblical" events. I agree. They  are. The problem is we humans are taking the Genesis story of creation in the Bible backwards. Instead of being stewards of the earth with the Creator we're de-developing the harmonious whole. Our relentless addiction to fossil fuels and the industry's addiction to profits promises to bring us back to chapter one, verse two. The plants and animals will go first (which is already happening) but we humans will eventually go too. We'll be left again with, "and darkness was upon the face of the deep; and the Spirit of God was moving over the face of the waters."