Thanksgiving is America’s favorite holiday. People of every faith tradition and people who disavow them all can come together and share the feast. Community shelters and faith communities open their doors and invite the world to come to the table. Families and friends come together and have a great time. Thanksgiving is one of my favorite holidays. 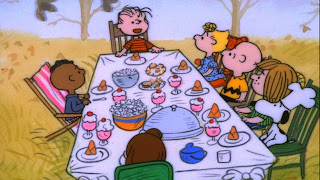 This year the mostly white congregation that I serve as their interim pastor will be joined by a black congregation that shares our building with us in a thanksgiving feast. In spite of the fact that the first organized civil rights sit-ins occurred here in Wichita, Kansas, in 1958, the city remains pretty racially divided. There are many people in the community working in the spirit of 1958 to reclaim a greater sense of wholeness in the community. I am thankful for these efforts, but regret we have made so little progress over the last 55 years.

I will miss that party at the church, which is held the weekend before Thanksgiving, because I will be in Georgia, standing with thousands of others calling for our federal government to close the School of the Americas, also known as the Western Hemisphere Institute for Security Cooperation. The rally begins on Friday, November 22, 2013.

One of the places that I hope to visit while I am in Georgia is the Steward Detention Center—the largest private prison in the United States with over 2,000 inmates being held for deportation. The detention center is owned by the Corrections Corporation of America (CCA). This company owns and operates 67 private prisons in the U.S. with a capacity of 92,500 beds. With the help of CCA we have managed to turn people into commodities and prisons into a federally funded private business operated for the profit of shareholders. It’s obscene. (Note: my dictionary defines obscene as “a system designed to invite depravity.”) 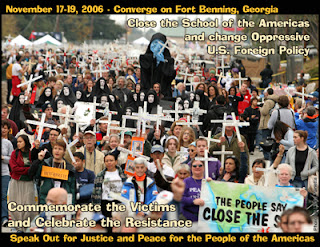 The main event will happen outside the gates of Fort Benning, the home of the School of the Americas. These demonstrations have made a difference. Because of the courage of those who gather here we have learned a lot about our governments complicity in the war against Mayan people in Guatemala; its support of “Operation Condor,” which involved the military in seven Latin American nations; the work of SOA graduates who have tortured and killed thousands of people in Mexico, Honduras and Columbia, and efforts to further militarize the U.S. economy.

I am looking forward to meeting and hearing speakers like Edith López Ovalle from Mexico, Loren Cabnal from Guatemala, and Héctor Aristizábal of Columbia. All of these speakers will share first hand personal accounts of the work of SOA graduates in their countries. And, of course, we will celebrate the courage and witness of Father Roy Bourgeois, who founded School of Americas Watch thirty years ago.

I have long admired the work of Fr. Roy. I met him a couple of years ago when he was in Wichita to speak. This year I am thankful that I am able to go to Fort Benning and join his ever expanding company of witnesses who call for the closing of SOA and the demilitarization of our hemisphere.

David Hansen
Posted by Carl Kline at 11:11 AM