The first time I ever saw a mediation take place was on the internet. It was an amazing experience. Here were two people who are usually adversaries in a courtroom, separated from each other's stories by legal teams and a cultural paradigm. But in the mediation, they were sitting in the same room with a mediator, listening to the story of the other.

The one party to the conflict had already been arrested and was awaiting sentencing for driving while intoxicated. She had run into the vehicle of the second person and caused some severe injuries. So the accused had to sit there in the presence of her victim and hear the pain and trauma she had caused, not only to the injured but to her family as well. And then the injured sat and heard the story of the other, her history of childhood abuse and her problems with alcohol and her regret about the pain she had caused. 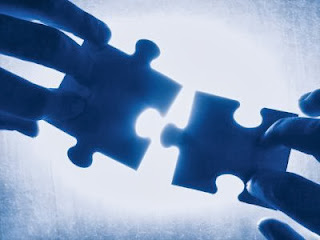 There's an organization in our area of the U.S. that provides this kind of service to those who have experienced crime and conflict and would like to be restored to some degree of wholeness. It's called "Restore" and is based in Sioux Falls, S.D.. Their mission statement reads: "Acknowledging that crime and conflict cause injuries to people and communities, Restore helps those who have experienced harm to return to wholeness. Based on a justice that heals, Restore programs enable victim, offender and affected members of the community to be directly involved in responding to crime and conflict. Restore provides safe and appropriate opportunities for harmed and harm-doer to discuss directly the human consequences of the injury, address issues of safety and accountability and to begin the process of moving forward."

One expects that such efforts at restoration go a long way toward alleviating the demons of hate and guilt, freeing both parties from some of the devils to a good nights sleep. It's always so disheartening to hear those who have suffered from a crime carrying their hatred of the perpetrator with them to the grave. All of that psychic energy over a lifetime devoted to hatred, with no place to go, no relief, no vacation.

Hate and guilt both diminish the spirit, the soul, sometimes to the point where vital life stops altogether.

There are several Universities involved in looking at the effects of anger and hatred on the physiology of the body. It's a well known fact that anger and hatred impact the one feeling those emotions. Blood pressure goes up with all the additional danger and fight/flight symptoms. But there have also been some new developments in the study of forgiveness. Forgiveness, on the other hand, moderates those fight/flight behaviors. The forgiving personality can talk about the experience of being wronged without having to relive it. They don't forget but they are able to forgive. Sometimes they are able to understand the suffering of the other as well as their own.

Suffering is the point! Suffering is universal. The Buddha says, "life is suffering." You may think you suffer alone, but it's only because you haven't taken the time, and been vulnerable enough with others, to discover what's under the surface of the lives of your friends and neighbors. And when we come face to face with the suffering of the other, it calls on the compassion we have in us, the generosity and love, and we're able to see ourselves in the other.

Carl Jung concluded that it wasn't the elemental forces of nature that were most threatening to human beings. It wasn't what was outside us, but inside us. "The Age of Enlightenment, which stripped nature and human institutions of Gods, overlooked the God of Terror who dwells in the human soul." That God needs to meet the God of Love face to face.

There are some states where mediation as an option for resolving conflicts is taken seriously. Colorado, for instance, requires mediation before any divorce cases can go to court. If the dispute can  be resolved in a more amicable way than an adversarial proceeding in a busy court system, why not try it. Certainly mediation promises to be better for the long term well being of any children who might be involved in a divorce. 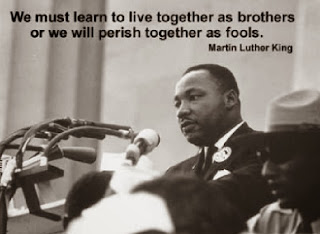 We have given Martin Luther King, Jr. a holiday and a memorial. But we still don't take his ideas and words to heart. King reminds us, "Through violence you may murder the liar, but you cannot murder the lie, nor establish the truth. Through violence you may murder the hater, but you do not murder hate. In fact, violence merely increases hate … Darkness cannot drive out darkness; only light can do that. Hate cannot drive out hate; only love can do that."