It's All About the Way We See Each Other


I have become adept over the years at finding space in which to pray in the traditional times and ways of Jewish prayer while travelling. So it was at Logan Airport early on a Sunday morning that I searched out the right place while waiting for a flight to Washington for the JStreet conference. At a gate near to my own, with only a few sleepy people waiting for flights not yet posted, I set my pack down in a corner and took out my talis (prayer shawl) and t’filin (prayer boxes), purposefully putting on the garb of prayer. Prayer book in hand, I began to pray, realizing quickly, however, from the growing buzz around me, that people were arriving sooner than I had anticipated. As I tried to focus, the sounds of distraction in fact helping me, urging me to concentrate, I couldn’t help but hear the voice of a child, as clearly, I’m sure, as did everyone else in the waiting area, “look daddy, he’s Jewish!” Uncertain whether the child was Jewish, her exclamation an expression of pride, or precocious, aware at a tender age of the human faith mosaic, her words stayed with me and became part of my prayerful intention. Here, where paths and journeys intersect, travelers from so many diverse starting points merge as one. As people on the way and on the wing, travelers all, there is an awareness of common purpose to be carried as a gift from an airport waiting-lounge. Going and coming and throughout my time away, I kept hearing the little girl’s words. I mused about appearance beyond the intimate garb of prayer, and about what conveys to others and to our selves the essence of who we are.

As travelers who set out from their own homes and so return at journey’s end, we learn and, perhaps, come even to share something of each other’s uniqueness. As travelers, we learn of all those others with whom we share the journey and the path along the way. It is the lesson in the first two portions of the Torah, the first eleven chapters of Genesis. Entirely universal, the portions of B’reishit and No’ach are about all people, of creation and the beginnings of the human story, all setting the backdrop for the particular story of the Jewish people. So we learn what it means to be Jewish in relation to others, being of the human family, yet returning home at night. Called by the uninhibited delight of a child to consider who we are, the early chapters of the Torah remind us of human moral calling and the way of its expression in our own lives. 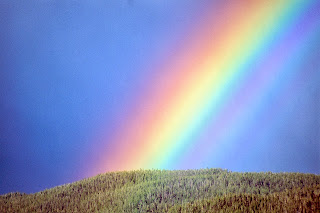 Culminating in the rainbow that appears after the flood in the Torah portion for the week of my travels, the portion of No’ach, Noah of the ark and the flood, we learn of moral development and the ability to change perspective toward greater embrace of others. As violence swelled in the world, itself the flood that ultimately destroyed, God saw the evil and brought the flood of water upon the earth. When No’ach emerged from the ark and saw the destruction, a poignant midrash says he began to cry. As No’ach was moved by the sight of such destruction, so too was God. At that moment, God says, “Never again will I curse the ground…; nor will I ever again destroy every living thing as I have done…” (Gen. 8:21). Recognizing the failure of violence as a way of change, another way is set in the clouds, a reversed bow that becomes a sign of peace, its string facing toward the other, assurance that no arrows shall fly.

The rainbow becomes an external sign of something even more important, the internal change that allows the rainbow to appear in the first place, that allows the bow in the hand of the warrior to be reversed, turned around as a sign of peace. Commentators point toward the change within God as a model for change within our selves. The Slonimer Rebbe notes that in the portion of B’reishit (Gen. 1:1-6:8), it is human violence that moves God to bring the flood, and in the portion of No’ach (Gen. 6:9-11:32), it is human violence that brings God to promise never again to destroy. On that shift in Divine perspective is a challenge for the way that people should view each other, Rabbi Samson Raphael Hirsch writes, “God has implanted into every human being the drive for independence so that eventually he will become persistent and steadfast in doing good.” Our own perspective of the other can be a key in allowing change to happen.

In regard to the Middle East, as in all the states of our own being, change in perspective, in how we see the other, will eventually allow the bow to be reversed in the hand of the warrior. There is change in finding another way than military might to challenge the evil of chemical weapons in Syria. It was an opportunity missed, hopefully to come again, in turning away rather than toward an Iranian leader who offered different words than before. So to shift perspective and see the Palestinian partner as real and present in the quest for two states, each reaching out to the other as equals, peace and justice joining. Offering a moment of levity, a Palestinian speaker looked to the Red Sox as a model of accomplishment for Palestinians to aspire to. There too, it is about perspective, how we see ourselves in relation to the other, how we work and travel together through the long season of life, nurturing and celebrating a new attitude and way of being. 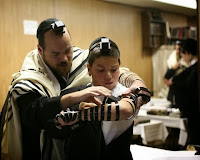 Throughout the JStreet conference I continued to hear the little girl’s words, “look daddy, he’s Jewish.” Whether the startling image of a man in talis and t’filin at an airport gate, whether of leaders or common folk, of k’fiah or kufi, of the same root and purpose as kippah, expressions of humility upon the head, it is all about the way we see each other.

Rabbi Victor H. Reinstein
Posted by Carl Kline at 11:10 AM