In the first church I served there was a young man who was born in Germany shortly after World War II. He lost his father during the war and his mother was the sole provider. She did everything she could to give her children what they needed but everything was in short supply. Milk simply wasn't available. As the young man grew up his teeth gave him problems. Sometimes the pain was unbearable.

One evening toward dusk, he was driving to an emergency appointment with a dentist when he hit a boy on a bicycle and killed him. Witnesses said the boy swerved into the car. Still, the young man was overcome with guilt and grief. He knew he was distracted by the pain in his mouth. He approached his trial with a combination of fear and relief.

I saw his story as an example of those invisible connections that put lives together and sometimes tear them apart. I also heard it as a story of the continuing ramifications of war; how the sins of one generation get passed on in myriad forms to the next generation, and the next, until we lose any sense of that invisible connecting thread.

In our culture, so enamored of speed, so focused on the immediate, so impatient for more, so ready to mortgage the future, the connections in life can get lost forever.

Only recently have I become aware of ocean acidification. We are hearing more each day about carbon  in the atmosphere and how it has a greenhouse effect on the planet. But we haven't heard much about acidification of the oceans. Each day around 22 million tons of carbon goes into the oceans. In too large quantities, it turns the water acidic. 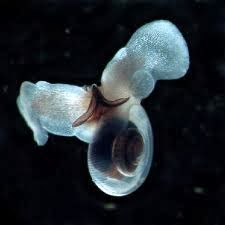 Most of us have never encountered pteropods. These are small creatures, about the size of a thumbnail, sometimes called sea "butterflies." They exist  at the bottom of the ocean food chain and they're losing their shells in the acidic seas. Scientists watching these pteropods worry they are the canary in the mine, and the days of coral reefs and shellfish are numbered.

We don't see the connections! In the restaurant, we want the fish served fresh, on time, well prepared and inexpensive. We don't think about the ocean food chain. We don't hear the action of the waves as we attack the dish. We don't feel the sand under our feet. We certainly don't think about sea butterflies.

Even when I question the waitress about the "Atlantic" salmon, I'm aware she can't confirm that's where it originated. The chef probably can't confirm it either. Maybe they can show me a package with an Atlantic label but somehow I've become suspicious. Where it's harvested has become important to me. I know there are now salmon farms. And since the west coast tuna have shown a connection to the continuing nuclear problem at Fukushima, one wonders about Pacific salmon.

When it comes to water, it amazes me that we don't see the connections. We are water! So how we can mix it with toxic chemicals and bury it in the earth; how we can endanger aquifers with tar sands pipelines; how we think we can use it to cool damaged nuclear reactors and store it for thousands of years; how we are willing to change the chemical makeup of the seas; mystifies me. 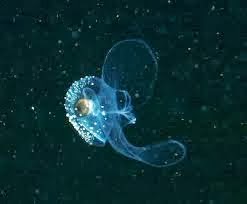 There are connections between people and people, people and animals, animals and animals, inert life and all the rest. The wind blows where it will. Water moves according to natural laws. If we think we can erect gated communities where we don't have to be connected to anything or anybody, we're in serious denial and serious trouble.

Teilhard de Chardin tells the story of sitting in a cathedral in Europe. As he sat meditating in one of the pews he glanced at a painting of Jesus of the Sacred Heart  on the  wall. As he watched, he said the heart began to melt. It melted out into the wall, into the cathedral, out the door and into the world around. For him it was not only a visionary experience but a metaphorical one. The heart of divinity is pervasive. It's all around us. It's in us through and through. It's the glue, the connection that ties it all together. We deny and disregard it at our peril.

Carl Kline
Posted by Carl Kline at 8:30 AM