If Only We'd Listened to the Indians

If Only We’d Listened to the Indians
Did you know that the democratic government of the U.S. was inspired by the Iroquois Confederacy? That constitutional framers like George Washington and Ben Franklin so admired that native form of governance that they enshrined many of its principles within our country’s foundational documents? 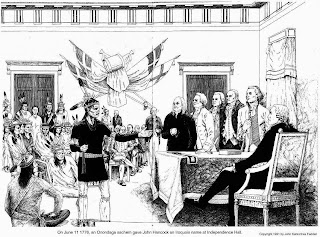 If you don’t believe it, check out Senate Resolution 331, from the 100th Congress in 1988: “…the confederation of the original thirteen colonies into one republic was influenced…by the Iroquois Confederacy, as were many of the democratic principles which were incorporated into the constitution itself.”
If you’re still unconvinced, consult such books as Bruce Johansen’s Forgotten Founders: How the American Indian Helped Shape Democracy. They line the shelves of our libraries and bookstores. Unfortunately too few of us read them. So we end up believing that Europeans arrived on the shores of this continent to find only savage wilderness in need of civilization. Far from the truth. The Iroquois Confederacy is compelling proof. That alliance of the Mohawk, Oneida, Onondaga, Cayuga, Seneca and (eventually) Tuscarora nations was highly organized, vast in scope and had a longstanding tradition of participatory democracy--the oldest on earth, in fact.
So let’s congratulate the Founders for knowing a good thing when they saw it. But they should have listened more carefully to the sachems. 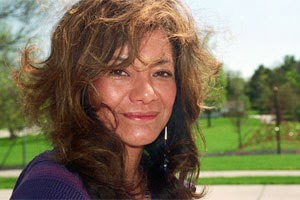 Last week Roberta Hill was among some native writers speaking at a conference held on the campus of a local university. Of Oneida heritage, she’s a wonderful poet and scholar, a professor of English and American Indian Studies at the University of Wisconsin-Madison. And as she told it, our Founders refused the counsel of native leaders on at least three critical points:
First, the sachems advised, democracy must provide for an equitable distribution of wealth, so that the
needs of all the people are met. Not just the needs of
a privileged few, but of everyone.
Second, democracy must recognize that the power of men is made possible only by the power of women, the life-givers. Therefore women must be treated with respect and possess equal standing to men.
Third, democracy must help preserve the people by dealing with their collective grief. When the nation has been traumatized by war or natural disaster or other calamity, the people must mourn together--truly mourn--or their woundedness will blind them, and cause them to make poor decisions that only compound their pain.
On these three crucial points, according to Hill, the Founders weren’t listening. (Perhaps they were too busy texting.) If they had listened, perhaps our nation today wouldn’t have the worst income inequality in the developed world, and all the problems that such disparity brings. Perhaps our laws and law-making system wouldn’t overwhelmingly favor not just the wealthy, but the super-wealthy--
Perhaps our nation wouldn’t refuse to enshrine equal rights for women in the law of the land; to pay the same wage to women as to men for doing the same job; to allow women to make their own choices about their own reproductive rights; to reduce violence against women by teaching males it is unacceptable and won’t be tolerated--
Perhaps, if we knew how to grieve as a people, we wouldn’t keep inflicting harm on our military veterans, who in great numbers are homeless, without adequate health care, without gainful employment. We wouldn’t keep holding the most vulnerable among us hostage to political posturing and monied interests. We wouldn’t keep blundering blindly from one horrific war (or “conflict” or “operation”) to another. In short, if we grieved well as a people, perhaps we would be less apt to inflict grief.
Yes, our nation could have been so different. Indeed, it still can be--if we listen to the Indians.