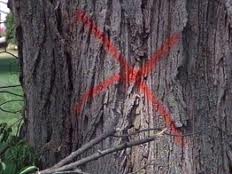 Yesterday, one of our trees on the boulevard in front of our house was marked with a big, red X. There have been lots of those letters appearing on trees in our town this year. According to the city forestry staff member I spoke with, it's a tough year for elm trees. Disease is rearing it's head in a big way. Elms may be having a more difficult time resisting the disease as they can be stressed by draught conditions, little snowfall and mild winters. The spread of the disease will likely result in twice as many trees coming down this year as in 2012. Several trees have already disappeared in our neighborhood and I'm aware there are several more that will fall.

The fungus that kills the tree is carried by a beetle. It can fly from tree to tree and the signs of disease often appear as wilted and yellow leaves at the top of the tree, before the usual turning of leaves in the fall. The forestry worker at our tree cut a piece of the bark out near the base of the trunk. He explained that he was looking for signs of the disease going into the roots of the tree. If it were in the roots, the two standing elms right next to it were likely impacted as well. Fortunately, it appeared that the disease was just in the higher branches.

Some years back, we lost an old elm in our side yard. It was beautifully shaped and shaded the whole side of the house. I had said for years if we ever lost that beautiful tree we would move. Then it came down and another one came down on the boulevard. With both of them gone we discovered how hot the summer sun really was. Although I'm convinced summers have been getting hotter (certainly more humid), without that eastern shade, curtains and air conditioning were essential. We'd always managed with fans before but shadeless structures demand another form of cooling. Funny, we never thought of figuring up the economic value of a tree, although I was certainly aware of the aesthetic value of the elder elm in the side yard.

In talking with forestry people, I'm appreciative of the proactive stance our city takes with the disease. We still have many elms in the historic district. And since there's a program in place to remove diseased trees quickly, others standing beside them survive another year, or more. And it gives us time to plant new ones. We haven't moved from our home of 34 years, even though that beautiful elm has been gone a long time. There's a lovely red maple in its place. Gradually, it's growing large enough to provide some shade in the yard, if not on  the house. Give it another thirty or forty years.

The Dutch Elm disease plan of action in our community is both an effort at mitigation and adaptation. We know we have a problem so we will slow it down as much as
possible, mitigate the worst scenarios. Spot the diseased trees and remove them as quickly as possible. That way the community doesn't get treeless all at one time. And then we adapt to the reality of the disease by diversifying the new trees that take their place. We plant them as quickly as possible in the treeless sites to keep the community shaded and beautiful for our children and grandchildren.

Thinking about trees, we spent several summers at a camp in the White Mountains of New Hampshire. One year we noticed the trees were losing their leaves near the top and bits and pieces of the leaves would come floating down to the ground as you walked through the woods. We didn't think too much about it till the second year when it was worse and there were these strange caterpillars hanging on strings directly above you. Walking through some areas of the forest you might have thought it was winter as they were without any foliage.

The third year, people at camp were in a panic. The trees were being stripped and walking under them was a horror. Things were falling constantly, like rain. The Forest Service was called. They came. I still recall the slow New Hampshire drawl of the worker who educated us. "These are Saddled Prominents," he said. "They come every ten or fifteen years. We're watching them. The trees can survive a couple years losing their leaves. We're looking for ground beetles and other predators."

Sure enough, the next year there were beetles all over the place. And the caterpillars were disappearing. The leaves were coming back on the trees. And I was grateful for the intelligence and wisdom of the New Hampshire Forest Service, using their powers of observation and knowledge of the natural processes to effectively manage the forest without the need for massive chemical or other  forms of intervention.

There are lots of folks observing what is happening on the planet. They are sharing their wisdom with us about natural processes that are sometimes becoming unnatural because we're, as humans, no longer in harmony with our environment. Ours is too often a discordant note. We need to mitigate our human arrogance and continual reaching for "more." We hardly take time to appreciate the "more" that's all around us. And we need to understand and adapt to our environment, not make natural processes adapt to us. Mitigation and adaptation; with the increasing warming of the planet the future will require more of both.