A Vision of Hope from Out of the Whirlwind


Winging our way home from Europe, thoughts come on their own, unbidden, flitting for a moment, some alighting, recall bringing reflection, a smile, a sigh, a tear. We spent a wonderful week in Belgium visiting family, cycling, walking, talking, laughing, catching up; Shabbos by the North Sea, in bed before her arrival and again the next night before her departure, long rays of sunlight well into night. From Belgium we went by train to Amsterdam for a conference. Worlds come together, the canals as streams of consciousness joining one to another, arteries that flow with the blood of history, life blood of a city, flowing with old and new, the beautiful and the sordid, streams of life pulsating. 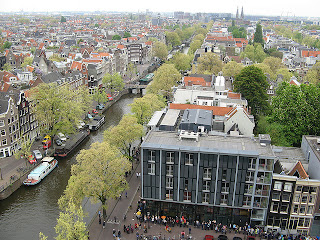 From along the Prinsengracht the canal flows past number 263. I linger there, twigs of thought forming a nest of memory in my heart, birds darting back and forth with the closing of my eyes, going to that place and back again, flying up to the tallest branches of a once soaring tree. It is the Anne Frank house. Each time I write of that sacred place, I write the letter “h” small, feeling that it is Anne’s house, and we go there to visit, not an institution, not really a museum. A young chestnut tree reaches up to the sky, not so high yet as the one whose branches gave comfort to Anne through the attic window of the secret annex. The new tree is planted from seed of the old, life renewed. A shoot from Anne’s tree was planted recently in Boston, connections, roots and branches she could not have imagined.

We waited in line for an hour and a half and the lines seem never to end, continuing into the evening when all other sites such as museums and galleries have closed. It really isn’t a museum, but a holy place, flowers left by the front door. People talk in line, offering each other what they know of Anne’s story, everyone becoming a little more familiar with the story and with each other, connected with her and with those waiting in line in a way they weren’t before, connections, branches, hope. Some around us are clearly Jewish, parents haltingly sharing with their children matters of identity, of what it means and might have meant then to be Jewish. It is part of the meaning and the hope of Anne’s house that most in the line are not Jewish, their questions and words one to another spoken with a hush, drawn to the story of a young girl. Inside, the hush is palpable. We listen to the echoes in the sacred place where Anne wrote in her diary, reminded of words gathered and of others lost, forever stilled, awed by the grandeur and the finitude of words.

We stand in silence, words seeming to fail, even as her words represent the triumph of words, the seeds from which new growth will rise, a tree of life. The Torah portion for the week we were in Amsterdam was the portion called D’varim, meaning “words” in Hebrew. It is the first portion in the fifth book of the Torah, Sefer D’varim, the Book of Words, Eleh ha’d’varim asher diber Moshe/These are the words that Moses spoke to all Israel on the far side of the Jordan. Moses would not get there, but his words would remain, guiding reminding, inspiring, intimations of all that remained unsaid.

We stood before a small exhibit, a prayer book in Hebrew and German that had belonged to Anne’s mother, Edith. She would occasionally show the prayer book to Anne, trying to teach her prayers, though evidently with little interest from her daughter. I felt a surge of connection welling up from within as I gazed at the page the prayer book was open to. It seemed so unlikely, a lengthy Aramaic prayer poem called Akdomos that is said on Shavuous, the Festival of Weeks that marks the giving of the Torah. I was perplexed. It would seem that Mrs. Frank would likely have shown Anne more familiar prayers. By whosever design the prayer book was open to Akdomos, I knew in my heart why and felt a shiver of recognition.

The poem begins with the words, Akdomos milin/In introduction to the Words, referring to the Ten Commandments. It goes on, however, to realize that all of our words can only be as introduction. Seeking to adequately praise God, the poet sings with love of such futility, Even if the Heavens were parchment, and the forests quills; if all the oceans were ink, as well as every gathered water, if the earth’s inhabitants were scribes…. And so for all that, it would be impossible to utter full praise. And in the same way, there are no words to describe the horrors of the Holocaust. That is my association with Akdomos ever since my dear friend, Mr. Jack Gardner, of blessed memory, a Holocaust survivor in my congregation in Victoria, British Columbia explained to me that if all the trees were pens and all the seas were ink there could never be words enough to convey the horror of what had happened.

In the innocence of her youth, Anne’s words come close to being more than introduction, or perhaps they are as introduction to another time that she believed would someday be. From the midst of destruction she offers a vision. That was the meaning and the challenge of the Sabbath that would close the week of our having been in Amsterdam, Shabbat Chazon/the Sabbath of Vision. The name refers to the vision of Isaiah, a vision of destruction that is read preceding Tisha B’Av, the day of mourning that marks the destructions of both Temples and so many other tragedies. It is a day when the world hangs in the balance. In the midst of dire warnings and painful images of the horrors to come, Isaiah plants seeds of hope. So it is with Tisha B’Av, a day of destruction and mourning, on which, the rabbis said, the Messiah shall be born.

From the “Secret Annex” along the Prinsengracht, Anne looked out at the upper branches of the chestnut tree, at birds on the wing and sparkling droplets of dew, and she bravely imagined a better world. Her words are praise enough to honor the human spirit, and in that, even the Holy One. A plea and a challenge to us, her words are a vision of hope from out of the whirlwind: “In spite of everything, I still believe that people are really good at heart…. I can feel the sufferings of millions and yet, if I look up into the heavens, I can feel that it will all come right, that this cruelty too will end, and that peace and tranquility will return again. In the meantime I must uphold my ideals, for perhaps the time will come when I shall be able to carry them out.”