To Reverence the Altar, for Reverend Anne Fowler


A precious time in each week’s turning, I left the quiet embrace of a recent Shabbos afternoon. After services, after lunch, after all the treasured interactions with people, within the Sabbath itself the afternoon is a time of dwelling apart, away from the bustle. It is a time of retreat, a time with family, with books, with nature, a time of renewal that I love dearly. I left to go to the Episcopal Church in Jamaica Plain to participate with other clergy in a service honoring the Episcopal priest upon her retirement. I had met with Anne soon after arriving in the neighborhood and we have remained friends and colleagues over the years. As hard as it is to step out of the solitary place of Shabbos afternoon, there was no question in my mind that of course I would go, so I left the familiarity of my own house and went to another’s house. 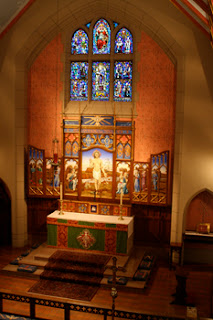 There is always something both exciting and awkward when participating in another’s religious rites in their own house, not in the careful choreography of an interfaith context but in the lived way of another’s tradition. It is a wonderful opportunity, in some ways much deeper than the interfaith balancing of traditions, when we need to negotiate a foreign landscape, remaining respectful both to oneself and to one’s host. In the instructions that came to the participating clergy, we were told that each one would be referred to as the Rev’d, and Rabbi Victor Reinstein. As much as I stood out in the program, I felt respected in my differentness. Among the instructions was one that caused me to wonder and muse, as we each approached the altar two-by-two, we were to “reverence the altar” and then turn to enter our row to be seated. While not exactly sure what was meant, it was not hard to surmise, realizing of course that this was not something I could do in ritual fashion, even as I offered reverence and respect through my presence.

The altar, once the place in tent and Temple upon whose un-hewn stones offerings were to be made, was meant to bring people together, to facilitate coming near to each other and to God. The word for offering in Hebrew is korban, formed from the root karov/near, close. Most offerings were to become a shared meal, a public and collective act, the one making the offering inviting others to join in a meal of thanksgiving or joy, or a meal of peace-making. An offering was also part of the process of t’shuvah/repentant turning, of repairing a breach caused by sin and wrongdoing, the first step taken by making public declaration of one’s need and commitment to make amends. The altar was to be made of whole stones, un-hewn, stones upon which no iron tool had come for shaping. The word the Torah uses for steel tool is cherev/sword (Ex. 20:22). All of these thoughts were turning in my head as I approached the altar in the Episcopal Church. I stood respectfully, offering my thoughts as an expression of reverence, as my clergy partner leaned in and bowed slightly toward the altar, each of us then turning to the side to our respective seats.

I thought about the meaning of the altar and of my experience on that Shabbos afternoon as I read the following week’s Torah portion, Parashat Balak (Numbers 22:2-25:9). Balak is the Moabite king who calls on the Midianite prophet Bilaam to come and curse Israel as Israel approaches the land of Moav along the way of the desert journey out of Egypt. Several times throughout the portion Balak constructs altars for offerings, seven altars each time, upon which Bilaam will make offerings of “seven bulls and seven rams.” Violating the very essence of an altar’s purpose, Balak’s quest to see Israel cursed cannot succeed. An altar is meant to bring people together, not to divide, to be a source of blessing, not of curse.

In a midrash on the Torah’s instruction to build an altar of whole stones, a play is made on the word for whole, shalem, the root of shalom. The altar is to be made of peaceful stones. As no iron tool is to come upon the altar, the rabbis taught, how much the more then should one who establishes peace between person and person, between spouse and spouse, between city and city, between nation and nation, between family and family, between government and government, be protected from all harm. As the sword is not to come upon an altar of stone, all the more so should a sword not come upon a human being, each one a potential peacemaker, each the ultimate altar to be reverenced. 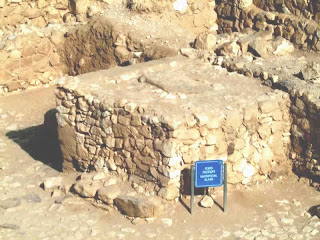 Going out from my own place to that of another, approaching the altar that is the other, there is a tension in Parashat Balak contained in a verse both troubling and challenging. Beginning to recognize the failure of his mission, following upon yet another misuse of an altar, Bilaam describes Israel to Balak as a people that will dwell apart and not count itself among the nations/am l’vadad yishkon u’va’goyim lo yit’chashav (Numbers 23:9). The verse can be read either negatively or positively, as referring to complete withdrawal from engagement with others, emphasizing insularity as its own value, a reading that in part emerges out of the experience of Jewish history; or it can refer to a creative timely or cyclical withdrawal for the sake of introspection and renewal. Jews have read it both ways, as justification for remaining apart, for separating ourselves and not engaging with others, eschewing interfaith dialogue and cooperation. And we have read it in the way of Shabbos, as creative, introspective withdrawal, from which to return to the world and engage with others.

As though to underscore the irony of their own disengagement, one of the places that Balak and Bilaam go to build their false altars is Kir’yat Chutzot/the City of Thoroughfares. It is the place to which we need to return from our places of retreat, to the thoroughfares of life, where paths cross and people engage, and there build altars of truth that join us all together, seekers and travelers from wherever we have come. There are times when we need to be separate, to turn into and be among ourselves, to learn and practice our own ways, to deepen the roots of Jewish identity, to learn to define ourselves for who we are, not as others might define us. That is the challenge for all people, to define ourselves in a way that allows us to be who we are, and then, so strengthened, to respectfully reach out to others for who they are. And so I left the quiet embrace of a Shabbos afternoon, the place in which I dwell as a Jew, and I went to my neighbor’s house to give honor, surely to reverence the altar.

Rabbi Victor H. Reinstein
Posted by Carl Kline at 11:15 AM