We were on the island of La Gonave, Haiti. We were there for several days. The work consisted of carrying cement block up a hill from the water front to the site of a new school. It  was a project developed by the United Methodist  Church in South Dakota and I was part of a small group that signed on. Many came from my community of Brookings and the surrounding area and there were several students from our campus ministry group at South Dakota State University. 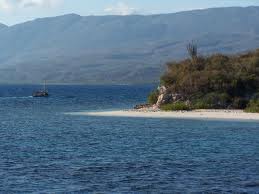 The day we left for La Gonave from the big island was one of those blue sky, puffy cloud days. The ride over in the boat, home made and wood hulled, with a small 50 horse power outboard motor, was a little choppy but nevertheless pleasant. The spray from the water was cool, the air was fresh and it was the start of a new adventure.

When we arrived, what we found was poverty. If Haiti is the poorest country in the western hemisphere, La Gonave is the poorest part of Haiti. The island is about 10 miles by 30 miles and home to around 120,000 people. Much of the food (and everything else) comes from the mainland.

We'd been told to bring everything we needed, including food and water, because there wouldn't be anything we could purchase where we were going. It was hard unloading groceries at the dock. We would be eating them over the next few days when it was obvious the folks in our island community had little or nothing. It  became harder still to have a meal together with the eyes of many looking at us in the background. We needed someone to multiply the loaves and fishes. There was never enough to go around.

I was fascinated by one element of the local infrastructure. The folks in the community had developed an elaborate catchment area for rainwater, mostly with roofing materials, so they could catch and use what little rainwater came their way. It was one of a very few sources of fresh water. Many possible well sites were made useless by the encroachment of the sea. It was another amazing display of how difficult it is for some people on the planet to get the most basic requirement for life, clean water. And it becomes more problematic with each passing day.

Another example of uncommon hardship happened the day before we were to leave. One of the students came to me in tears. One of the women of the community had approached her to take her infant child with her. The mother was hopeless about the infant's future. Likely, she expected the child to starve to death.

So we worked, we worshipped, we lived with the people of this island community for a few days. Then it was time to leave, to say our good byes, to return to the big island. 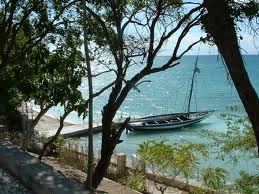 We would return in the same boat that brought us over. And we were told we should leave early in the morning, before the water got rough. So we reported to the one small dock at 4:30 in the morning, with all our belongings. Little did we know that what seemed like half the community would be going to the big island with us. As the boat began to fill I wondered how many it could safely hold. That's when several men came down the hill with a huge generator that also needed a ride. It was all they could do to lift it into the boat. After a few more people got on with whatever they were taking to market, we set out.

Our captain, who had his hand on the motor, was skin and bones. He was the most unlikely person I could imagine to handle a water craft, with what I considered huge tonnage and a tiny motor.

If the sea was supposed to be calm early in the morning, I can't imagine what it was like later. Almost immediately we hit huge swells. It seemed as if we were going to be swallowed up at any moment. Any deviation from the path  through the  swells and we could be swamped. Some of our group were sick. All were holding on for dear life. And many of the Haitians were enjoying the ride. When the motor ran out of fuel, several of the men lifted a barrel of gasoline with a hose on it to fill the motor again, all as the boat pitched and fell with the sea.

My prayers were to the one who was able to calm  the seas. They might have been prayers of praise for our unlikely captain, who steered us through the rough waters with a steady hand. We  arrived at the big island, safe, soaked in salt water, relieved and alive. 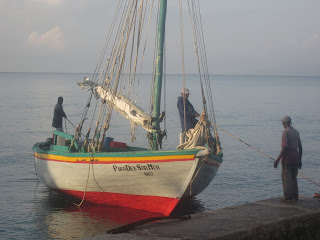 We're in rough waters! There are lots of folks in our boat and we're beginning to get tossed around. Some are sick! Many are afraid! Some are praying. Others are cursing. All are affected. And our cultural assumptions and stereotypes keep us from recognizing the unlikely captains in our midst, who could steer us safely through the rough waters of climate change and earth desecration, failed economies, pervasive violence, purchased and dysfunctional governments. We ignore at our peril the wisdom keepers of First Nations, the elders, the young and innocent, the nonviolent, the morally rooted, the poor, the exemplars of our religious traditions.

They are all unlikely captains in our capitalist cultures but their wisdom and values could guide us safely to shore. They are all as unlikely a captain as the one who said, "Blessed are you poor, for yours is the kingdom of God." And, "But woe to you that are rich, for you have received your consolation."