Some years ago in South Dakota we were able to receive a special cable television channel. If my memory is accurate, I think it was called the Rural Telecommunications Network. It was a channel where someone in Rapid City could watch a conference being held across the state at South Dakota State University or someone in Aberdeen could watch an official state government function happening in Pierre. You didn't have to travel across the state and take a whole day doing it. You could participate in events long distance by television from your own home or school.

Since every day wasn't scheduled with a special event, in off hours the network offered televised operations at the National Aeronautics and Space Administration. I remember watching as NASA workers sat at their desks. They might get up and go talk with a colleague, get a cup of coffee, come back to their desk and continue whatever it was they were doing. All of this might happen in the time it takes to watch the evening news. It wasn't the most gripping TV fare. Even so, I still considered it better than a lot of the stuff on TV. 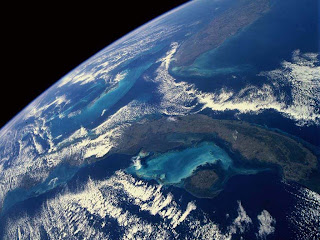 But the really important content was when you saw the planet from the point of view of a NASA satellite. Several times when I was playing with the remote, I happened on video from space on this channel. Once the satellite was moving slowly over the Alps. I'd never seen these amazing mountains from the air. It was slow motion gorgeous.

Another time the satellite was traveling South to North up the West Coast of North America. You could see the ocean, the land, the mountains. The geographic features were clear and awesome.

It reminded me of some of those first pictures of earth from the early space explorations. From  the point of view of space, things look different. You don't see the man made borders and barriers. You don't see fences and check points. You don't see wars and armaments. You don't see all those things humans have constructed to make pieces of the planet "theirs" and off limits to "them."

Because of the satellite imagery, I returned to this channel again and again. I began to check it out on a regular basis. I was always curious to find out where we were traveling this time. And then it happened! A letter came from the cable company notifying us they were removing the channel from their line up. They claimed it was too little accessed. I called, immediately. "Please don't do this," I said. "It's one of my favorite channels." To no avail! I was probably the only one who objected and it disappeared.

Honestly, I wanted film from a NASA satellite beamed into every homeroom in every school in America, every morning. It was a very different point of view from our norm. I wanted children to see our home from space, as astronauts might see it. Perhaps in doing so, we might be more apt to treat the planet as the beautiful and precious home it is, for all of us. 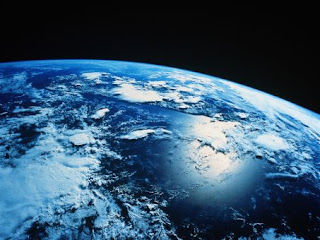 The ancient Hebrews celebrated a Year of Jubilee every fifty years. In the year of Jubilee slaves went free, property returned to its rightful owners, the people tried to make right the sins of the past. And they tried to look at their society as if through the eyes of God, healing the brokenness, binding up wounds and preparing to start afresh.

Instead of a limited point of view common to earth bound humans, they tried to see their existence from a higher frame of reference. For them it was a life changing vision and an opportunity to renew their society.

Recognizing that  we all have a little different point of view can be helpful in learning to live together in community. An exercise I often use in class or workshops is to stand in the middle of a circle of students and ask them to say what they see; only what they see. The question is, how many eyes do I have. My back is to some in  the circle. They say none. Some on  the side say I have one eye and those in the front say two. We talk about point of view and what's necessary to get the fullest and best understanding possible.

Or sometimes the Turnabout Map comes in handy. In this map, South America is on top, North America on the bottom. The direction signs are right there on the map, pointing the right way, it's just that the placement of the continents have been reversed so north is toward the bottom. I ask "what's wrong with this picture?" Gradually, we recognize that from space no country is "up," or "down," "on top" or "under." As the map says,  "This turnabout map of the Americas … is geographically correct. Only the perspective has been changed." 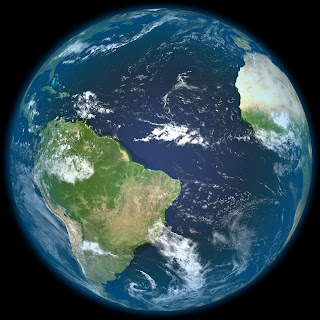 As we grow older, some of us encounter imperfections in the vitreous humor of the eye called "floaters." They are those little dark spots, strings, or cobwebs that come floating into one's vision. The Latin name was "flying flies." It's an appropriate and descriptive title for the one in my field of vision on awakening this morning. It  reminded me there is often something unique in the eye of every beholder. We may not see eye to eye here on earth, even if our vision is clear and unclouded. But if we are able to occasionally look at our surroundings as if from the heavens, perhaps we can still make a home with each other.