It was a very quiet 4th of July here.  The annual fireworks display went off as scheduled without incident.  The parade happened.  Picnics were held.   Beaches were crowded with vacationers.
Unlike other years, there were no “private” fireworks in our neighborhood after hours.  It all seemed so normal and – quiet.

Further abroad, a president was ousted and a country came under military control again.  A high profile trial of a famous sports figure proceeds.  Health care measures were postponed, wild fires burned out of control, and the UN noted the rapid rate of global warming.  The Voting Rights Act was modified and DOMA was declared unconstitutional.

The Boston Globe gave over its editorial page to the full text of the Declaration of Independence: “We hold these truths to be self evident, that all men are created equal, that they are endowed by their Creator with certain unalienable rights, that among these are Life, Liberty and the pursuit of Happiness.”

Two weeks ago, I witnessed an 8th Grade Awards ceremony that preceded the graduation ritual. I wasn’t sure what to expect, not having been to an 8th Grade graduation since my own some 57 years ago.  Sixty young men and women gathered to be honored in the school’ s gymnasium.  Beneath each of their metal folding chairs was a scroll that they were to open and read with their families when they got home.  The scrolls contained positive memories and stories from each of the teachers who taught them from kindergarten through graduation. 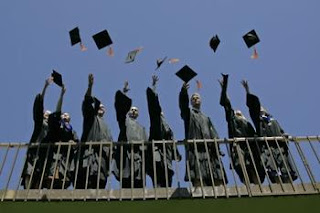 Excerpts from the scrolls were shared as part of the awards ceremony and each child’s individual strengths were publicly affirmed and validated.  The other awards were not monetary, but value laden - - the Hypatia Award to a young woman who excelled in Math; the Abigail Adams Award to a young woman with good leadership skills.  Various language, science, and writing awards - - each award affirming a quality or strength in the student who received it.  Not one child left that auditorium without being affirmed and validated by the faculty and staff of the school.  The teachers openly declared their love and affection for these kids and I witnessed the principal and vice-principal hugging these kids with tears in their eyes.  It was high moment.  I found myself thinking that communities can really make a difference when it comes to shaping our kids.

The “Reflection For The Day” that appears regularly in The Globe seemed to have been planted: “If people are treated as special, sacred even, they begin to behave that way.  This creates a different kind of society.” (David Byrne)

I left the auditorium with a renewed hope that in spite of all the difficult stuff in the pages of the newspaper, there is still the possibility of raising a generation of kids who will shape the world with positive values - - because these values have been recognized and affirmed and validated within them. 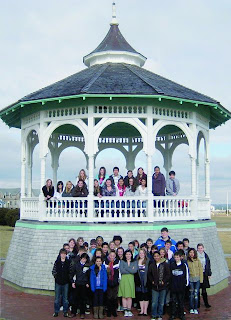 My soon-to-be-14 year old granddaughter resolutely confirms that a person should be able to marry the one he or she loves.  She reminds us that our re-cycling practice could use some up-dating to be more effective.  She is concerned about climate change and she is preparing to develop an age appropriate literacy program for kids at risk.  AND there were 59 other kids in her class carrying within them similar hopes and dreams and possibilities and gifts and talents.

As I read the Declaration of Independence again, I have hope that we will yet live out the time honored affirmation that all people will know they are equally valued as sacred and that all people, gay and lesbian, resident alien, variously abled and disabled, prisoner and free, child and elder will know life abundantly in freedom and happiness.

Vicky Hanjian
Posted by Carl Kline at 8:36 AM