Every once in a while I come across something that gives me hope for our energy future. It cries out, "people are smarter than we seem." The latest example comes from an article in "Sierra" magazine.


Jong Bok Kim, a researcher in chemical and biological engineering at Princeton University, was sitting outside his office thinking about his research subject. He was asking, what is the most productive and efficient skin for a solar cell: pyramids, strips, mirrors? As Kim gazed at a nearby shrub he realized he was looking at the answer. A leaf is covered with transparent cells that act like magnifying lenses and there are millions of ridges that guide the light deeper into the inner workings of the shrub. When Kim created a solar skin like a leaf, he discovered it absorbed six times the light of a flat surface. 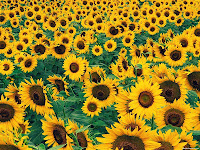 Did you know how researchers at MIT discovered the best arrangement for a concentrated solar plant? They arrange solar mirrors around a central tower in such a way that the light is reflected to the tower's tip. They learned this design from a sunflower, one of the best and most efficient conductors of solar energy.

Or, a scientist in China made a solar cell arranged like the tail of a swallowtail butterfly. The butterfly's wings have ridges and valleys that deliver maximum warmth when the wings are spread wide. Rather than use his butterfly solar cell to create electricity, this scientist used it to create hydrogen, a clean burning fuel that could power cars of the future.

All of these discoveries reminded me of a visit I made to a house in my hometown of Brookings with a built in passive solar system. The thing that most impressed me was the design of the roof. It was constructed in such a way that when the sun was in the southern sky in the winter, it entered the house under the roof line. When the sun was high in the sky in the summer, the roof line shaded the house. At the time I remember thinking, how bright! Such a simple recognition of how nature operates saves on heat and air conditioning. It begins with observation of how the world operates and adapts human operations to nature.

What a difference to the typical Western attitude, where we say this is what we want to do and if nature can adapt fine, if not, nature be damned! As if we weren't part and parcel of nature!

Exxon Mobil or not, solar power is coming. Solar installations in the U.S. more than doubled from the second quarter of 2011 to the second quarter of 2012. In California, utility scale solar production last year matched that of a large coal burner or nuclear plant. In the meantime, the rooftop solar production in the state reached a comparable level, plus 20%. At West Oakland's Peoples Grocery, 70 community members financed an 8.6 kilowatt solar project on the store roof that will save $32,000 over ten  years, just one of several projects enabled by Mosaic, a solar start up. St. Vincent de Paul, serving a thousand meals a day, found 80 supporters for a rooftop project that saves them about $1,200 a month. It's estimated that the rooftop potential in the U.S. is about a fifth of the electricity demand we had nationally in 2011.

And solar costs are coming down. Expectations are that in two or three years, New York and California will have "grid parity," when power from the sun is no more expensive than normal electricity for one's home. 41% of building permits in Hawaii now include requests for installing solar.

Then there's Germany. On May 26 of last year, rooftop solar in that country produced half their electricity demand. In a country that's not known for sunniness, the investment in solar bodes well for their future. And the costs of installing solar in Germany are half what we would pay in the states, partly as a result of less red tape.

You would think it would be a no brainer. Sunshine is free! It's the free gift of the creator to power the growth of flowers and trees, butterflies and bees, and you and me. But there's the rub! It's free! In a world of our creating, someone has to "own" the sunshine, or the wind, or the water, or the heat of the earth, in order to satisfy the "green frog skin" of Lame Deer fame. Instead of choosing a vision where we live in harmony with the creation, too many continue to choose a path of exploitation and profit, pitting one person or one country against another. 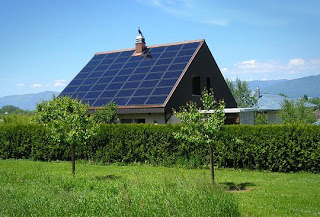 Our living room has several large windows, facing south. The sun in the winter comes streaming through those windows with warmth and cheer. They say sun on the back of your neck is good for depression so if I'm feeling down I sit on the couch, set just right, so the sun hits the back of my neck. And then I read about smart people, mostly young, who are looking at the world and realizing how we might fit in better. The sun and their intelligence, give me hope.