A Good Day to Die


As I climbed the stairs to go to bed late last Thursday night, I wondered if my dad would still be with us in the morning.  He was nearing the end of his time on earth. I had my hopes.  If he could wait just a little longer he would pass over on my birthday.  When I came down again in the morning, the caregivers whispered “He’s still here.”

And so began one of the most remarkable days of my life as we waited and watched –singing to him – reminding him that we were all there to cheer him across the finish line.  Near the last moment, I whispered the words of the 23rd Psalm in his ear with a few embellishments of my own to remind him of all the times he had walked by still waters and rested in mountain meadows.  He breathed a sigh of relief and did not breath again.  He died on the anniversary of the day he welcomed me brand new into the world and I was blessed with the gift of witnessing his birth, brand new, into the realms beyond life – a circle completed.

One sibling was missing and trying to get to my dad’s bedside.  He arrived after the fact so we kept my dad’s body with us until all of us could be together to bathe him one last time and prepare his body for removal by the funeral director.  Because my dad and I will now share my birthday as a very special kind of new beginning for both of us, we brought my birthday cake in and sang Happy Birthday to him - -and then to me – and then we said farewell. 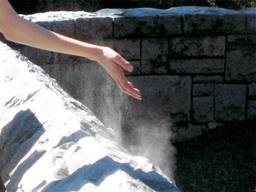 In the 24 hours that ensued there was much to be discussed while we far flung siblings were all together in the same place.  Emotional issues to be received and honored, financial decisions to be made, dates for memorial service and spreading of ashes - - all things that in many families are a source of great contention and suffering.  As we sat around the kitchen table and processed all that needed to be done, we laughed and cried and received and embraced one another.

And then we gave thanks for my dad and the many life lessons of nonviolence he had taught us throughout our lives – not so much with words as by the way he lived in relation to the world around him.  He was not an ego driven man.  He could laugh at himself.  He offered friendship not only to us as his children but to pretty much everyone he encountered.  It was his way.

I am pondering this lovely life that has passed from among us as we move along together as a family in his absence.  We are his legacy - -four remaining siblings all influenced by this soul we called “Dad.”  He taught us to live in the world in a respectful way – respecting self - - respecting others - - respecting the earth. His motto was “Always leave a place in better shape than you found it.”  I remember cleaning up many a campsite and having to pass a rigorous inspection before being allowed to climb into the car for our departure.  His early shaping of my values were the foundations for my commitment to trying to live nonviolence. What better gift can a father give to his children?

As I talked with many of his 27 grand and great-grand children over the last few days, I could hear in their love and appreciation of their Poppy that the lessons are indeed being passed on to yet another generation.  It is confirmed to me once again that what we do here matters.  Even if the only thing we do in life is to get our relationships right – it will be a significant contribution to the future.

So – Dad - - Here’s to you – our ancient one. May your legacy live strong and bless the future with the leaven of nonviolence.