The Art of Living Movement

Sri Sri Ravi Shankar leads
America to Stand-Up to Violence with One Billion Acts Of
NON-VIOLENCE!

Given all the violence we have witnessed in America, I want to share with you a movement that inspires me--a bold plan to counteract America’s 100 million acts of violence every year.  Not with legislation, rhetoric, or more sedatives and tranquilizers...but with the most powerful force on the planet:  the love and conscience of an awakened people.

This month, the Art of Living is launching a national movement lead by Sri Sri Ravi Shankar, founder of AOL. He is an internationally acclaimed humanitarian, a nominee for the Nobel Peace Prize, and the recipient, this month, of this year’s Ghandi-MLK-Ikeda award for Nonviolence bestowed by Morehouse College. For over 30 years, his mission of uniting the world into a violence-free, stress-free global family inspired the lives of over 300 million people who participated in Art of Living programs, in over 151 countries. Sri Sri has been a strong supporter of the anti-corruption movement in India, a voice for women’s empowerment throughout the world, and an advocate for countless other humanitarian causes.

Starting March 25, through April 3, Sri Sri will be visiting the US during his five-city tour through San Diego, L.A., Chicago, New York and Atlanta. The New York event will launch March 30th in the Dag Hammarskjold Plaza, in midtown Manhattan at 2pm.  We invite you to join us at the event and to commit to your own act of non-violence. ( http://nonvio.org/ ) With our commitments, we will make the voice of non-violence louder than violence. Together we will reach 1 billion acts of non-violence.

"Often violence comes with noise. Non-violence happens in silence. People
who are violent make  loud noise; they make it  known.  People who are 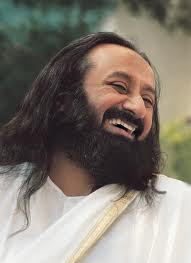 non-violent are quiet. But the time has come for people who are non-violent
to make noise so that the violence will quiet down. The message of
non-violence has to come loud and clear so that it can be heard from a
young age.
A sense of shame has to be connected with anger and violence. The reason
for violence in young people is a sense of pride in anger and violence, not
a sense of shame. People feel proud that they are violent or angry. They
think it is prestigious or a status symbol to be aggressive. Aggression is
not thought to be a quality to be ashamed of. This promotes aggression and
violence in the whole society, and when aggression and violence are
promoted, human values diminish. Some movies and modern music glorify
frustration, anger and revenge and make these a role model for children."

Ilona Noskova, Guest Blogger
Posted by Carl Kline at 10:14 AM