On the Wing of Every Snowflake


The light was palpable. The Vermont hills were bathed in all the shades of winter’s light, surrounding, enveloping, breathtaking, breathgiving. From hilltop to valley, through field and forest, we followed the cross-county ski trails, a thread of light unfolding around us and within us, a tapestry of light, threads of morning, noon, and night. The azure sky so vast and deep, opening into the heavens. Myriads of twinkling stars at night, but the moon was shrouded in gauzy haze. Of time and change, telling of transition, not of our own a single mood to hold, steely light of snow on the wind, opaque. We awakened to the snow and skied in its falling. We felt like little figurines in a snow globe amidst the swirling flakes, all turned upside down, renewed and pure. 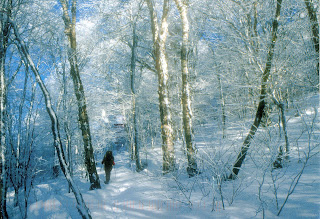 There is an ethereal light that shines as a gift all around, its kindling not of our own intent or making. It was there from the beginning, the light of creation in its birthing, light that was there before the light that was created on the fourth day. It is that light which the Holy Blessed One put aside and stored for the righteous in the future to come. It is a light that shines with a vision of the future. It is the light of the future, illuminating the path to its own fulfillment. Beyond human ability to create that light, it is yet for us to raise it up and allow it to shine out from the place it is stored.

Instructions are given at the beginning of the Torah portion T’tzaveh (Exodus 27:20-30:10) for the lighting of the menorah in the desert sanctuary and the Temples later to come. Instructions are given to Aaron, and so it comes to be for each one of us, to take for you pure olive oil, pressed, for lighting, to raise up light continually/l’ha’alot ner tamid. It is not for us to kindle, l’hadlik, the word usually used for lighting, as with a match, but to raise up pre-existing light that comes of a prior source. In the way of its description, the light of the menorah comes to represent the or ha’ganuz, that stored up light waiting for the future that is for us to create. Of that light raised upon the menorah of life, the Slonimer Rebbe teaches, it was not a material light/lo haya or gashmi, rather there shined through it the light of God. 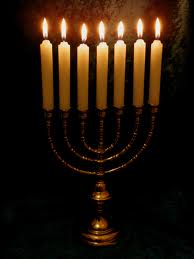 Of that light, there is also meant to shine the light of God’s comfort, so hard to find sometimes amidst the darkness. Returning from Vermont, I attended a shiva service of mourning so filled with darkness, as palpable as the light had been, for a young man of nineteen whose family I had known when teaching in a Jewish day school. A freshman in college, he had died in his sleep. Ages and times reversed, his grandfather led the prayers, his mother’s voice so strong in saying the words of the mourner’s Kaddish, words to ward off the darkness. And of the stored light, even of the young man’s soul, the Slonimer Rebbe teaches in the same teaching of the menorah’s light Isaiah’s words that we say upon the ending of shiva: your sun will set no more, neither will your moon be withdrawn, for God will be your enduring light.

And then we came to Purim in the offing beyond Shabbos. It is a day of masks and merry-making, the hidden and revealed, a celebration of salvation in ancient Persia, perhaps catharsis meant in the telling, the Jews in the end slaughtering those who would have slaughtered them. It is the story told in the Scroll of Esther, called the Megillah, violence and vision, pain and pageantry, too much for God, Whose name does not appear in the scroll at all. So quickly come the transitions in all the moods and shimmering hues of life and light, so hard to navigate, every season and mood as a snowflake upon the hand, none to hold for long. One of my favorite lines in the Megillah is near the end, a line we repeat at the close of the Sabbath every week as we look to the time of stored up light revealed, la’yehudim hayta orah v’simcha v’sason vikar/there was light for the Jews, and joy, and cheer and honor. It is the reverse of the annihilation that was meant to be. There is a teaching; those who walk in darkness saw great light. So may it be for all who mourn; and for all who struggle to transcend the violence that is part of the Purim story, part of the world in which we live. 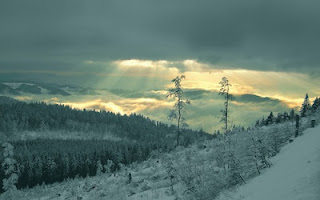 Purim is meant to be a time of turning reality on its head, so the masks and costumes and strong drink, of turning upside down what is and seems to have always been. As we did to our enemies what they had planned to do to us, the goal should not be to reverse and do the same, but to transcend and reverse an entire way of response, to truly turn reality on its head. That is the secret message, the deeper message of Purim, to change the way of our own response, even to those who would do us harm. We are told in the Book of Proverbs that the Torah is light, its practical expression, its raising up, in our hands, in our deeds of goodness, ner mitzvah v’Torah or/the commandment is a candle and the Torah is light. Of the light that shines at the end of the Megillah, the rabbis say, orah zu Torah, she’b’z’chut ha’Torah nitzlu/this light is Torah, for through the merit of Torah we are saved. It is not through arms and the doing of violence in kind that we shall be saved, but through the raising up of light to dispel the darkness. The light that shines at the end of the Purim story bids us look beyond the darkness of the Purim story itself. It is the light that was stored up at the very beginning that is for us to raise up now, finally turning reality so fully on its head that we find a new way of being in the world. It is the palpable light that is heaven’s kiss upon the earth, touching every hilltop and valley, carried on the wing of every snowflake, infusing all with gentleness. It is the light of the human soul, God’s candle in the world.