There was a film at  church last night that got me thinking about gifts. The film was "The Way." Martin Sheen is the main character and the film is directed by his oldest son, Emilio Estevez. In short, in the film, Sheen's character loses his son to a hiking expedition on the "Way of St. James" (also known as the Camino de Santiago). This is a pilgrimage of hundreds of miles that ends in Spain at a cathedral where St. James is said to be buried.

When Sheen's character goes to pick up his son's body, he decides to have him cremated and to make the pilgrimage for him. As he travels the "way," he distributes his son's ashes along the path. 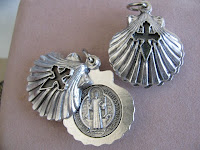 The symbol for the pilgrimage is a shell. I have one hanging on a leather cord in my office, stamped Camino de Santiago on the back. I believe it's silver-plate, with the cross of St. James on the front. It was a gift, from a friend in Germany, who lives near the way.

Watching the film and seeing the shell like mine in an early scene, took my breath away. You see, I told my friend when I took the gift, I wouldn't wear it till I had made the pilgrimage, walked those many miles with my own two feet. That's why it hangs in my office around a pin and not around my neck. At my age and with bones that sometimes ache when I wake in the morning, not from walking but just from normal everyday living, I'm not sure this pilgrimage on my bucket list will actually happen. I may need someone to do it for me, with my ashes.

Some people are amazing when it comes to selecting gifts. First of all, they know the person they are gifting. They actually think about that person, what they like, what they are like, and they go for it. Often they're willing to risk. If their gift brings tears, or laughter, or joy, or stunned silence, they'll risk it. Because it's not just a thing they're giving. Whatever the gift is, there's soul, there's spirit or love in it. 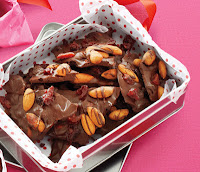 Homemade things usually have soul. Christmas at our house always brings some homemade gifts from friends that we've come to expect and treasure: homemade candy, homemade bread and jam, homemade caramels, homemade cinnamon candy, and homemade cards. The personal touch always seems to give it a special quality, a bit of spirit.

I wish I were better at gift giving. Probably I don't spend enough time meditating on the person I'm gifting. Although come to think of it,  I've had lots of practice with the humorous kind. Family have come to expect it of me. So when my brother unwrapped the Christmas gift that had leftover tea bags in it, everybody laughed, including my brother (at least he smiled). Or when I would don my santa mask and play the santa role for friends and family, everyone knew they were going to get something wild pulled from a box of discarded auction remnants from out in the shed.

Thinking of auctions, I always wonder about those old photographs you find. Somebodies grandfather, sitting stiffly for the photographer, dressed in Sunday best and wearing his most dignified expression. Or the children, looking nervously uncomfortable or a bit robotic, so you know a parent is standing just to the side of the camera ready to pounce should they blink. Who knows who these people are? Were the photographs given as gifts and now are long forgotten, unknown to the living?

Another gift giving I'm moderately good at is my annual book give away. It all started when I left my office in campus ministry. There were way too many books, collected over many years, to take home. So we filled three banquet tables with books and put them in the lounge with signs that said "please help yourself, they'e free." Everyone did. They were all gone in four days.

Now the book give away happens every year just before Christmas. The reason I say I'm good at it is, I often suggest certain books for certain people. They are actually in my mind when their book goes on the table. This once a year event of gifting others allows me to gift myself the rest of the time and the book piles don't get overwhelming. I can't think of another gift with as much soul as a good book.

Sometimes, as I work at a local antique store, I'm aware that a purchase becomes a gift. The buyer, appreciating the quality and history of an item, realizes there is more to the item being purchased than appears on the surface. And often that  realization comes in a memory of what grandmother had on her dining room table, or grandfather had out in the barn. The purchase becomes a gift, with the spirit of those who went before attached by memory to the material in ones' hand.

"When you makest presents, let them be of such things as will last long; to the end they may be in some sort immortal, and may frequently refresh the memory of the receiver." So says the 17th. century English divine, Thomas Fuller.

Of course, there are other kinds of gifts than those we purchase or even hold in our hands. Children are often born with certain gifts that begin to be revealed as they grow and mature. There was the film of the 5th. grader playing varsity basketball on the news last evening. He's small, but good. He seems to have a special gift.

And then in so many ways we've all been given unexpected and often undeserved gifts. In Christian theology it's called "grace." It's all those everyday experiences where we're surprised by beauty, or joy, or love. We see the snow falling gently on an all white world or see the bright red of a cardinal against the snow or watch our child making a snow angel. Small gifts with lots of soul.