In some ways, I just wish the subject would go away. I'm not a gun owner. I don't ever expect to be one. The first time I shot a gun was as a kid. It was a BB gun, and the local grain elevator was a great spot to shoot birds. They were mostly sparrows and seemed like a dime a dozen to me. I remember how I felt hitting them, until the police arrived and told me I couldn't do that.

The feeling was different as an adolescent, the first time I killed a water bird. There wasn't any interest in taking another, ever.

The latest statistics I heard on the news were that 5,305 applications for conceal and carry permits were received in South Dakota in the month of February. That's 603 more than January of 2013 and 3,534 more than in February of 2012. Even several years ago, South Dakota was first in the U.S. in permits per capita. Imagine what it must be now. Somehow, it doesn't make me feel safer.

This news came the same day I read about two guys in Rapid City, South Dakota. The Associated Press reported they both accidentally shot themselves. The one guy was working on his handgun and shot himself in the hand. The other was putting his pistol in the holster and shot himself in the foot. Embarrassing! I hope they aren't applying for the job of South Dakota school sentinels.

That was another piece of gun news the same day, "school sentinels." The title conjures up this picture of a sentry on a battlement or a minuteman ready to take on the British. Our state legislature passed the school sentinel legislation with our former Brookings Mayor voting for it. Although most school boards, school administrations and teachers don't want guns in the schools, they can now have them, in the hands of "appropriately trained" persons.

I'm not sure about kids today, but my friends and I would have known quickly which teacher had a gun in school, where it was kept and what it looked like. We would have managed to check it out, under lock and key or not. I'm not going to say how we would have done it, but as kids we saw and figured things out adults didn't think we could. 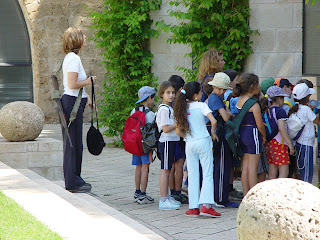 There are a couple of justifications for school sentinels and other "good guys with guns" that need to be exposed. They are constantly put forward by the National Rifle Association and their political supporters as reasons for having "good guys" with guns to protect us from "bad guys" with guns. Neither rationale stands up to scrutiny.

Perhaps you heard of the celebrated military sniper who was shot and killed at a gun range in Texas. Ironically, Chris Kyle, a former Navy SEAL and sniper with 150 alleged "insurgent" kills, was unable to protect himself or a friend from an assailant, even at a range loaded with guns, and with other "good guys" with guns. Funny, you would have thought his killer would have been taken out, or at least shot right there, after he did the initial damage. No such luck. He left without a scratch.

Or how about the argument that guns offer protection for one's person and property? Before the NRA killed the research by convincing Congress to pull the funding, the Centers for Disease Control did some investigation of gun violence in the U.S. back in 1996. This is what they found, in the words of Dr. Mark Rosenberg, who was Director of the CDC's National Center for Injury Prevention and Control.

"One of the critical studies that we supported was looking at the question of whether having a firearm in your home protects you or puts you at increased risk. This was a very important question because people who want to sell more guns say that having a gun in your home is the way to protect your family.

It also showed that the risk that someone in your home would commit suicide went up. It went up five-fold if you had a gun in the home. These are huge, huge risks, and to just put that in perspective, we look at a risk that someone might get a heart attack or that they might get a certain type of cancer, and if that risk might be 20 percent greater, that may be enough to ban a certain drug or a certain product. 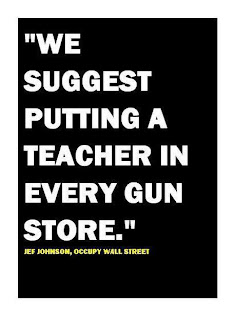 I'm not sure who he is, but a quotation attributed to Jef Johnson says it best for me. Forget about putting armed sentinels in every school, or guns in every home. Jef suggests, "Put a teacher in every gun store." And I'd give them a yardstick and an evil eye like Mr. Gruey used to give us kids in my sixth grade class.

Basically, guns are about power. With a gun, there's no forgiveness. There's no chance for the despair of suicide to turn into hope or for doubt to turn into faith. There's no way love can be salvaged from hate or calm from rage. It's not likely an enemy will be made a friend, or sins be redeemed, or evil transformed into good. There's finality in the power of guns.

Weapons are not a creative power. They're of their very nature a destructive power. And a society that ignores the deeper needs of the human heart and the human being in favor of an armed camp, is morally and spiritually bankrupt.