I awoke with a question trying to form itself at 5:30 this morning.  Before even making it to breakfast I was impacted by the headlines telling of an armed man who has kidnapped a five year- old little boy from his school bus and is holding him hostage in an underground bunker in a backyard somewhere in Alabama.

With the issue of gun control in the foreground of so many conversations, it seems that the universe actively conspires to keep it from sliding into the inner pages of the newspapers.  The forces in favor of instituting a variety of measures aimed at limiting access to a range of weapons organize their strategies. The pro-gun elements re- trench and dig in to resist any limitation on their freedom to be armed.

The question that has been trying to form is one about the mindset of the most vocal and vociferous proponents of the 2nd Amendment right to bear arms.  What I find myself wanting to ask is “What is the unnamed terror that resides in the collective unconscious of a population that needs to have unencumbered personal access to weapons of the kind that caused the Newtown devastation?”

As I listen to the rhetoric of the leadership of the NRA and other equally strident voices in favor of gun freedom, something inside me wants to ask, “What are they afraid of?”   “What is it in their spirits that makes the world so dangerous for them that they must be armed for any eventuality?”

As I keep nattering about with the question, I realize that it will probably not be answered.  There is something about great fear that seems to get expressed in anger. The anger precludes any insightful conversation about the hidden foundation beneath the anger and the literal defense of that subterranean foundation that requires being heavily armed. 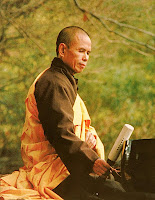 The issue of gun control is a fertile playground for self -examination.  In recent weeks I have been struggling to discern the middle way between a soft and, perhaps, unrealistic compassion on the one hand and a fear based anger response on the other.  I want to be able to respond to my perceived enemy (symbolized by the angry proponent of gun ownership) in a compassionate way – to understand the suffering that motivates him but I do not wish to be lazily complacent in the face of a very difficult and dangerous conundrum.

Thich Nhat Hanh’s guidance for managing personal anger is, through mindfulness, to accept and embrace and cradle my own anger as I would a hurt child, to attend to it with compassion. If I can learn to do this perhaps I can extend the same comfort to another angry and fearful person.  Sadly, on any given day, I would rather they just undergo a complete transformation and give up their gun-wielding ways without my having to interact at all.  Still – that seems to be the first level of engagement – cradling and comforting my own anger –my own fear - - coming into intimate and compassionate relationship with the same fear that resides in me as resides in the pro-gun human being.

In my morning reading two brief statements are so conveniently juxtaposed as to both challenge and support my questing today.  First, I encounter Dilgo Khyentse Rinpoche: “The burning flames of anger have parched the stream of my being.”  In the presence of this teaching, I am reminded that this is the nature of the spiritual dilemma I encounter in my own question and it prompts another: “Who am I in the face of the parched stream of being who faces me behind the defense of gun-ownership?”

The second statement I encounter is from Ian McClaren: Be compassionate, for everyone you meet is fighting a great battle.”