"Think more like a river and less like a dam." This is a sentence that caught my attention in an article I saw in an issue of National Geographic. The article was about some of the great protected rivers in the United States. I don't remember the author of the article but I quickly memorized the line.

Still, as much as I like the line, I'm not always sure how to implement it. The flow of my mind can be filled with dams.

Take lutefisk, for instance; dam. I can't get my mind around that one. Or how about sardines out of a can, or oysters, or even shrimp. I mean, I can't imagine how some people actually chew oysters. It's bad enough to imagine them slithering down my throat in a single swallow. And how can people eat shrimp when they still have that funny tail thing, on or off. I think like a dam when it comes to eating some of those creatures from the ocean, including octopus.

Since my father was a minister, I grew up in the forties and fifties in a fairly conservative Christian home. We kept the sabbath (Sunday) holy. We read the Bible in a literal way. I had never heard of biblical scholarship and didn't know you could read Scripture contextually. There was a huge dam holding my religious thought in place. I remember feeling guilty, because the day we arrived in New York City to start Seminary, was a Sunday. Here we were, unloading the car and "working" on the sabbath.

Seminary blew a hole in my dam of fundamentalist piety. I learned how asking a few simple questions, like Who, When, Where, What and Why about the Bible, revealed all of this astounding and interesting information about an ancient yet modern way of understanding the world. My mind started flowing more freely over unknown terrain, all along the riverside, often spilling over the surrounding floodplain. What can one say except that it was a great release. That's how my mind felt. 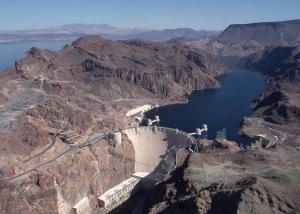 That brings me to dams on the Missouri River here in South Dakota. I don't know what's happening in Montana. But if our mild winter weather in South Dakota is any indication, people may be wishing we had some of that water from previous flood years in the system this year. Maybe folks will just blame the Corps of Engineers again. But one of the dams in our thinking we need to remove is floodplain development. Why in heavens name would you build a nuclear power plant on a Missouri River floodplain, except you'd have a cheaper and closer water source; but at what risk? I suppose you can come up with the same cost-benefit rationale for building them on earthquake faults? Or why do people insist on building homes on a floodplain?

A Lakota friend once told me we have too little respect for what he called "the water people." He personified water. Water had rights, just like human beings. One of the rights of water was to flow freely, just like we humans want to be able to travel without restrictions. What would you think about roadblocks between your hometown and the next. Dams! No travel allowed.

A friend was showing me an article the other day about the partnership that's beginning to emerge between Oberlin College and the city of Oberlin, Ohio. They are experimenting with a new venture that promises to break down some dams in the way people think about town and gown, as well as the way they understand development. The project is about development from the inside out, rather than from the outside in. It promises bottom up development as distinct from top down.

We need lots of holes in those old dams of development. Often, for communities like Oberlin and my own, always looking to outside entities ultimately results in de-development. There is so much clean water that can flow from releasing the waters of community and college creativity behind those dams of "it can be done better by someone else."

Thinking about this project in Oberlin, I couldn't help but think about the dam I've heard in local decision making, "we've never done it that way before." It kept the City Council from considering glass pave, or grass pave, or a permeable concrete, when my neighborhood decided to pave our alley. So we have asphalt, that cost an arm and a leg when oil was at its' highest peak, and all our neighborhood water flows into a waste water system that pollutes local creeks and has to be rebuilt since it can't accommodate all the water flowing from newly paved alleys, parking lots, etc. What a dam it can be, (especially in churches), "we've never done it that way before." 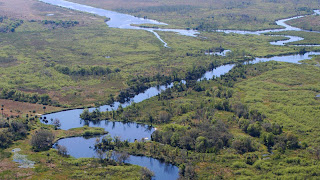 And likely the biggest dam has been built around warfare and violence. People find it so hard to imagine any other way of being in the world, even with examples like Gandhi and King and Thich Nhat Hanh and Jesus and so many unknown to the larger consciousness.

There's a form of meditation where you let the mind flow freely, like a river. You don't pass judgment on where it goes. You recognize that your thoughts can come and go, jumping here and there, like a monkey in a tree. You just gently bring your thoughts back to the center of your mind. Gradually, with practice, it takes you to unexpected places and uncharted depths.

Meditation helps me when my mind is cluttered and damned. It's a useful and healthy practice for anyone. It can help us think more like a river and less like a dam.