Good Guys and Bad Guys: The Grim World of the NRA 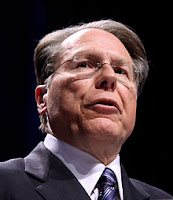 "The only thing that stops a bad guy with a gun is a good guy with a gun." So says Wayne LaPierre, chief executive and spokesperson for the National Rifle Association (NRA), in response to the Sandy Hook Elementary School massacre.

Honestly, seeing him on national television and hearing him voice that infantile cops and robbers mentality and utterly repugnant statement took my breath away. His philosophy of life places all of us in the jungle, prepared to kill or be killed; survival not just of the fittest but the best armed. Really, have we come to that as a country?

I've already seen far too much of that mentality and it's consequences. It's happening daily, after Sandy Hook. How about the guy in New York state who shot and killed the two firemen on Christmas eve after he set his house on fire with his sister in it. He used the same weapon as at Sandy Hook, one he got a friend to buy for him, since as an ex con who killed his grandmother with a hammer years earlier, he couldn't own guns. He had three guns at the scene.

Or how about the 11 year old in Utah who took a .22 pistol to school at the insistence of his parents, to "protect himself" after Sandy Hook. His teacher found out about it after he pointed it at the head of a girl at recess and told her he was going to kill her. Or how about the Alabama guy who didn't think his wife was receiving proper care at a hospital so he brought his gun at four in the morning and wounded three before he was killed in a shootout with police. Or how about the urban killing fields like in Chicago, so often ignored by the media, where gun violence is an everyday occurrence. Gun murders, some of them multiple since December 14, are in the hundreds.

Having just returned from two weeks of driving on Massachusetts highways, I can't imagine a gun in every car. Not knowing my way on occasion, I likely would be dead now. And South Dakotans in my town probably didn't hear about the school buses in Haverhill, MA. Somebody was shooting them with pellet guns, shattering bus windows and frightening children inside. One window shattered next to the head of a child. So, Wayne, should we give every child on the bus a gun to shoot back, or must every school bus carry an armed "good guy?"

Sorry Wayne, I'll opt for a different vision of the society I'd like to inhabit.

I'm sure LaPierre believes what he said. But he's certainly paid well to say it. The latest compensation figure I found for him was $845,469. It wasn't quite as much as what the Executive Director of General Operations of the NRA, Kayne Robinson earned, at $1,027,217. And when you check the compensation figures for many of the top executives, they fall in that $400,000 plus income bracket.

Looking at those figures, I began to have a little different perception of the NRA. I'd always seen it as an organization of mostly guys who like to hunt. I'm not a hunter myself but know many who I respect. They are hunters, not killers. Some use bows. Many use shotguns. They walk the fields for pheasants or they stalk deer. They don't want or need assault weapons. They make up some of the membership of the 4 million in the NRA, perhaps the great majority, I don't know. But if so, their voices are not the ones being heard in the halls of Congress and in state legislatures around the country through the likes of ALEC (American Legislative Exchange Council) and through the Corporate Partners and Funders of the NRA. 74% of those corporate funders are arms manufacturers. It's their voice being heard in political circles.

In the four counties around Newtown, Connecticut where the massacre of the innocents took place, there are more than 400 gun dealers. There are more gun dealers in the U.S. than there are MacDonald's restaurants and Supermarkets. In the same Newtown where Sandy Hook elementary is located, is the headquarters of the National Shooting Sports Foundation. They've spent $1.7 million lobbying on gun legislation since 1998 and spent three quarters of a million on elections since 1990. They're one of several organizations, besides the NRA, overwhelming the political potency of organizations like the Brady Campaign to Prevent Gun Violence. Just the NRA alone spent 73 times more than the Brady Campaign on lobbying the 112th. Congress.

So, once again, we're talking about big money behind big organizations influencing big government. Sandy Hook will likely fade into the distance just like Aurora and Tucson and Virginia Tech and Columbine and all those other multiple killings we would like to forget. And the NRA will continue to press for more and more potent weapons in the hands of more and more "good guys."

At the 2009 Conservative Political Action Conference, LaPierre told a cheering crowd "the guys with the guns make the rules." It's not intelligence or knowledge or creativity or morality or character, or God forbid, love of neighbor, that's the basis for rule making. No, for Wayne, it's guns. 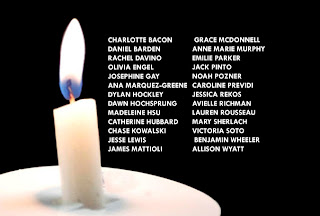 Unless more of us who have another vision we want for our children and grandchildren find our voices and act on that vision, the U.S. will remain in the hands of the likes of Wayne, a veritable killing field.

If we only will, we can renew our commitment to mental health care for those who need it. We can teach creative conflict resolution in our schools and work places. We can pass some sensible legislation that keeps assault weapons off the streets. And most of all, we can reclaim a fundamental assumption implicit in our nation, that we're all in this together. It's not a dog eat dog, good guys and bad guys world; it's one of mutual aid and love of neighbor. That's our heritage and our mandate for the future.

I agree. The world isn't made up of "Good Guys" and "Bad Guys". Most people fall in between. I do think anyone is capable of murder. People can suddenly snap and harm others. Not necessarily in a mass shooting, but often in domestic disputes.
I know that we don't have control over who gets guns completely. Someone may qualify for a gun, but they may have an insane relative who will find it and use it.

I do wish America wasn't so gun-happy.

I do wish you liberal idiots would wake up and smell the real world. We do not live in a utopian society, nor will we ever. If all guns were confiscated from law biding citizens then the only people with guns would be criminals. Cops are here to show up after the crimes and provide a sense of safety but rarely prevent crime. You choose to be a victim when you choose to not protect yourself. Guns are not the problem, mentally ill and drugs are the problem. If someone wants to harm themselves or someone else they will figure out a way. To blame guns for all the death is like saying all these spoons make me fat....