Terrorists in Our Midst


A west river rancher friend called this morning. Sometimes he calls early, usually between 6 and 7 AM, my time. Fortunately this morning, it was later, as I was savoring my sleep. I still recall the Easter morning he called about 6 AM, just to let me know the meadowlarks were back.

He's usually full of information about the world around him. He notices birds and bush, cattle and grasses, wind and weeds, weather and water. And almost every time he calls, there's something disturbing him he needs to unload on someone, namely me. 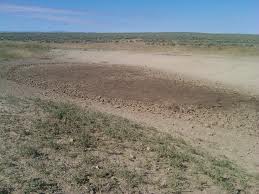 This morning he was upset about the devastation along the East Coast from Hurricane Sandy. He still has that Catholic ethic inbred in him, where he cares about what happens to other people, even though they may live thousands of miles away. He can still feel another's pain. As an example, this morning he also told me about having a neighbor over for a little whiskey and conversation the other evening. He tries to spend time with him at least once a week since the guy's wife died last year after a long struggle with cancer and the guy has Parkinson's.

But the issue that caught my attention the most was his comment about his prairie land. It's parched and cracked. He tried to recall how long ago it was they got a few tenths of an inch of rain. And then he quickly went on to say only one of their water holes had water in it and they had to pasture cattle out several miles away where a creek was still running and there was grass to eat.

Guess what? Extreme weather is not just happening in Bangladesh or Pakistan or Haiti anymore. It's obviously happening right here now in the U.S.of A. 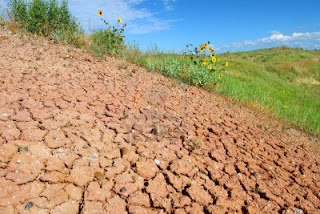 North America had the warmest summer ever and July broke all records. We experienced enormous forest fires. For the first time in recorded history all the Arctic sea ice disappeared and the warmest temperatures ever measured on a Greenland glacier went into the record book. Most are aware of the extended draught in Texas but how many of us are concerned about the expected extension of our own draught in South Dakota?

As Governor Cuomo of New York State said after Hurricane Sandy, “I said kiddingly the other day, ‘We have a 100-year flood every two years now.’ These situations never happened or if they happened, they were never going to happen again. … I think at this point it’s undeniable that we have a higher frequency of these extreme weather situations, and we’re going to have to deal with it.”

The arrogance of these terrorists is as extreme as the weather. They are willing to risk making the planet unlivable rather than back off their exploitation of fossil fuels, like the Canadian tar sands and the Bakken boom. They say, we will adapt. Tell that to those on the Jersey shore or the relatives of the dead. We need to make these terrorists focus their money and energy on renewables, instead of the engines of destruction. 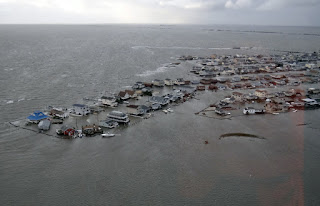 I agree with Bill McKibben of 350.org (his article in Rolling Stone on the math of global warming is a "must" read). Let's stop naming the hurricanes after people and name them after the perpetrators of extreme weather. How about Hurricane Chevron, or Hurricane Exxon. And how about stopping investing in these sowers of terror! (I intend to check on the investments of my church!) Who are these people who are consciously willing to make money off the destruction of the planet? They need to get a life!!

Climate change did not "cause" Hurricane Sandy. But global warming certainly helped. The ocean along the East coast is five degrees warmer than it was in 1970 and the water in New York Harbor is a foot higher. That makes a difference! And if folks in the teeth of this storm found it frightening, God help us all as we continue like lemmings down the path of fossil fuels, fueling the planet for far worse weather to come. The path we continue on doesn't hold much hope for our grandchildren. It will be hard for them to adapt, especially hard for the billions alive now of modest means. And if the 1% think their money will save them, they should think again. As Dr. King said, "the arc of the moral universe is long, but it bends toward justice." 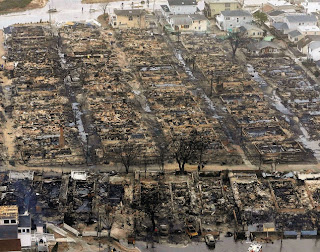 P.S.: Exxon and Shell just announced they made $16 billion in the last quarter alone. The cost of Sandy is estimated at $50 billion today. Maybe the fossil fuel carbon producers will help New York City rebuild infrastructure. More likely, they will continue avoiding their fair share of taxes and avoid contributing to the common good.

P.P.S.: And yes, Governor Romney, I too would like to stop the oceans from rising. You see, my grandchildren live on the coast!

Carl Kline
Posted by Carl Kline at 9:52 AM