The Secret of Nonviolence

It always amazes me how peacemaking operations are the best kept secret on the planet. Who knows about the work of Peace Brigades International, doing nonviolent accompaniment work around the globe since 1981? How many people are aware of the work of the Nonviolent Peaceforce, building an army of unarmed volunteers able to be dispatched to trouble spots anywhere, serving these days in Sudan, the Philippines, Sri Lanka and South Caucasus? Or how often do you read in the news about Christian Peacemakers, or Witness for Peace? And it seems like the only time United Nations Peacemakers are in the news is when one of them gets killed driving a red cross truck or transporting food to starving refugees. 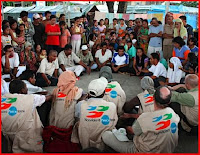 One of the reasons we continue to go down the path of war and violence is because people don't know about, nor trust, that there's an alternative. The history and contemporary examples of nonviolent social change are there. But like so much of history that doesn't fit with the cultural paradigms of the day, that history is ignored or deliberately trashed, never to see the light of day.

Peter Ackerman and Jack Duvall have put together a book called "A Force More Powerful: A Century of Nonviolent Conflict." There are so many nonviolent campaigns in the twentieth century one can gain insight and wisdom from, it's hard to choose the most significant. But surely Gandhi's independence struggle in India ranks among the most astute in theory and the most successful in application. But who recognizes and applies today the successes of nonviolent struggles in India, in South Africa against apartheid, in Chile under the dictator Pinochet, in Poland with the Solidarity movement, in our own South during  the civil rights era, in Denmark resisting the Nazis, in the Philippines deposing Marcos, or in Serbia, democratically getting rid of the "Butcher of the Balkans?" Who mentions these successful experiments in social change in recent history?

The first Peace Brigades International project began in the early 80's in response to a request from the Mutual Support Group for Families of the Disappeared (GAM) in Guatemala. This was a period of intense government terror and repression in Guatemala, with husbands and sons disappearing and mothers of the disappeared suffering assassination and death threats, especially as they worked publicly for human rights. GAM requested help from PBI, and the first peace brigades team was quickly formed and went to Guatemala. There they began to accompany the human rights workers in GAM and their families wherever they went. Since the internationals made themselves known as such, it gave the Guatemalans some additional space in which to do their work for human rights and their missing loved ones.

There was some political risk for the Guatemalan government in killing a foreigner, more so than killing Guatemalans, who were being killed with impunity. At the same time, PBI formed an emergency  response network of concerned internationals, so on a moments notice hundreds of telegrams could be sent to appropriate offices in  the Guatemalan government and military. Some messages might be from Senators or Congresspersons, Parliamentarians or other government officials.

After the accompaniment began, no GAM leader was killed and GAM credited their survival to the accompaniment they  received from international volunteers. Over the next 15 years PBI accompanied hundreds of individual Guatemalans and organizations, sending over a thousand volunteers and developing support groups in fifteen countries. After the signing of the Guatemalan Peace Accords, an evaluation in 1989 determined the project could be concluded. By that time, PBI projects had begun to develop in several other countries.

Since its beginnings, PBI has been active, at the invitation of in-country nonviolent organizations, in El Salvador, Haiti, North America, Sri Lanka, Indonesia, Colombia, the Balkans, Nepal, and Mexico. With thirty years in the field, with an intense preparation and training program and thousands of returned volunteers from many different countries and cultures, PBI has a wealth of insight and wisdom in the dynamics of nonviolent intervention in conflict situations. The same is true of all their sister organizations.

One has to ask why this experience of nonviolent change is so secret? Why isn't the knowledge gained by this kind of field experience, gained at great risk in situations of war and terror, not included in the process of governmental decision making? Why are these organizations doing the work of peace making, so hidden from public view? Why is violence and war constantly made attractive to youth, when it takes far more courage and strength of character to face the violence in conflict unarmed, with only your training in nonviolence and your wits to protect you? 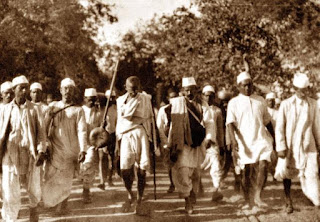 Gandhi claimed he would rather be violent than cowardly. For him the nonviolent warrior had to be fearless, always ready to sacrifice one's life in the cause of a lasting peace. For him the most courageous challenge was turning the enemy into a friend, something he was able to successfully accomplish with the British empire. He understood an eye for an eye and a tooth for a tooth made the whole world blind and toothless. It was the innate capacity of human beings to rise above the level of the beast that distinguished them from the law of the jungle.

We see the capacity human beings have for making friends, for loving those who are different, for respecting the beliefs of others, for engaging in constructive dialogue; we see this capacity everyday. Violent conflict and killing is an aberration from the normal kinds of human interaction. Why does our better nature, the foundation of a civilized society, get so little attention, and violence is made to seem the name of the game?