Reflctions on a Visit of Father Roy Bourgeois'

We all need people who give us inspiration. We need people that we regard as spiritual pioneers or exemplary figures and to whom we can look now and again for signs of hope. For me Father Roy Bourgeois is one of these people.

Over the years I have admired him for his strong stand against the School of the Americas (SOA), which is also known as the School of the Assassins and which the U.S. government euphemistically renamed the Western Hemisphere Institute for Security Operations. For the past twenty-two years Fr. Roy has witnessed against this school’s betrayal of our nation’s ideals and core values. Thousands of people join him every November and stand at the gates of Fort Benning, Georgia, where the SOA is housed. They engage in study, sing songs, share prayers, walk in a funeral procession carrying coffins representing those who have been murdered, and some get arrested. They publically call out the names of the children, women and men in Latin America who have been slain by graduates of this school, and as each name is spoken the people answer “presente.” And they demand that the school be closed. 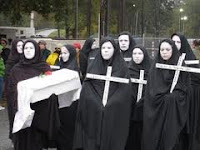 On November 16-18, 2012, the School of Americas Watch (SOAW) and its friends will be there again singing, praying and carrying crosses and coffins as they recite the names of people who have been killed by SOA graduates.

When I learned that the Wichita Peace and Justice Center was sponsoring Fr. Roy’s visit to our community I started anticipating this chance to meet him. He was here for three days in September to talk with college students, peace activists and the editorial board of our local newspaper. He attended a reception held at a Mennonite Church and he gave a talk at the Unitarian Universalist Church, which is where I heard him. His story is well known, but it is worth retelling and updating.

Father Roy became involved in issues surrounding U.S. policy in El Salvador in 1980 after four U.S. churchwomen were raped and killed by Salvadoran soldiers, at least two of whom were SOA graduates. Two of the women were his friends. Ten years later he founded the School of the Americas Watch. What we know about the SOA is largely due to Fr. Roy, the work of SOAW, SOAW teams in Latin America, Human Rights Watch and Amnesty International. 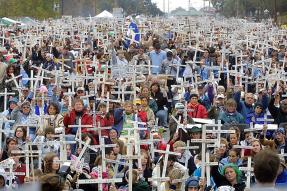 Every year the school trains 1,200 soldiers, high ranking military officers and political leaders from Latin American countries. Students are schooled in counter-insurgency, interrogation, extradition, torture, extra-judicial killing, murder and repression. SOA graduates are responsible for thousands of deaths in their own countries. They conduct their acts of terror and murder in our name. We the people spend $30 million annually to support this school. We pay all of the expenses of students who attend it.  School officials deny culpability for the deeds of school alumni and contend that “No school should be held accountable for the actions of its graduates.”

Enlightened Latin American leaders are not so facile with the facts. They are distancing themselves from the SOA. Since 2006, the following six nations have withdrawn from SOA and no longer send military or police personnel to it: Uruguay, Costa Rica, Nicaragua, Bolivia, Ecuador and, most recently, Venezuela. It is reasonable to think that each government made this decision in spite of pressure from the U.S. government urging them to continue to support the school. 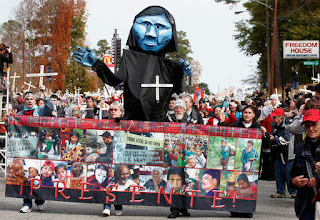 In the U.S. Congress a bill to abolish SOA was introduced in the House Armed Services Committee in 2005. It had 135 co-sponsors. Two years later, in 2007, Representative James McGovern (MA) introduced another bill to defund the school. That bill failed by six votes. In September of this year Fr. Roy and a SOAW delegation met with a top White House official to discuss the future of SOA. One can hope that the discussion will strengthen the drive to close the school.

A delegation from our community will be going to Fort Benning this November 16-18. Because of commitments that I have made it is unlikely that I will be able to make the trip this year. If I do not go, I will work with others in the community to sponsor a local event to coincide with the SOAW witness in Georgia. I would like to encourage you to do the same.