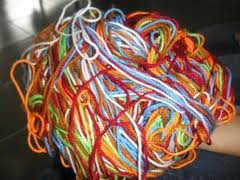 In a recent fit of domesticity, I decided to take up knitting again after many ill- fated attempts and unfinished projects.  I wasn’t far into the process when I managed to get the yarn amazingly snarled as I tried to turn a neatly wrapped skein into a useable ball for knitting.  The skein was the kind where the yarn pulls out from the center.  As I pulled and pulled to make my knitting ball, I kept getting complex knots and snarls.  (The knitters out there will recognize that I am ever an inept beginner!!)

I was bemoaning a particularly nasty snarl to a friend - - begrudging the time it was taking me to straighten it out so I could begin knitting.  Ever helpful, she laughed and said, “you have what I would call a Gordian Knot!”   I confess I had to look it up to see exactly what she was referring to: 1) Gordian Knot – a knot supposed to have been tied by Gordius, a legendary king of Phrygia, and declared by an oracle to be capable of being undone only by the man who should rule Asia.  Alexander the Great cut the knot in two with a sword. 2) Any difficulty that can only be solved by drastic measures.

As I was about to get the scissors to cut out the knot so I could proceed with getting the yarn wound into a ball, my friend said “What you need is a “fid”.

OK.  So two new bits of learning in one afternoon.  “And exactly what is a fid?” 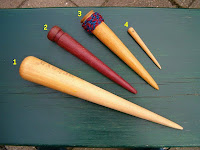 It turns out that a fid is a nautical tool - a large tapering pin used for opening up the strands of a rope when splicing it.  The tapered end can also be used to loosen a knot in a rope in order to help untangle it.  A few days later, while sorting some inherited odds and ends from a long deceased great aunt (who tried patiently to teach me to knit when I was a child) I found a knitting equivalent of a fid - - a small ivory implement, tapered at one end, that I could slip easily and effortlessly into the most intractable snarl and begin to loosen it.

Alexander did the expedient.  He slashed the knot and won the prize of empire. He cut the Gordian knot.  In my mind’s eye I see all the loose, severed ends of connection in the strands that formed that knot.  The integrity of the knot itself was destroyed and the remaining strands were made useless.

I was not willing to sacrifice that much yarn in the service of a speedy fix.  The fid seemed a more fitting solution.  As I pondered the images of knots and fids, the “fid” suddenly became a reasonable metaphor for nonviolent problem solving.  I wondered about our ability to become human “fids” – who can enter intractable issues from the perspective of inserting calm wisdom and compassionate understanding into heated and snarled interactions in the service of nonviolent resolution.

It takes longer and requires more patience to be a fid than it does to attack a snarled knot with scissors or sword, but in the end, when the fid has been the instrument of the unsnarling, we might end up with a really useful and whole rope or skein of yarn rather than a lot of useless frayed ends that serve no lasting purpose at the end of the day.

As I have observed and listened to the heated political discourse leading up to the presidential elections, I keep looking at the issues and the candidates and I keep watching and hoping for the “fid”.

Actually, I think that a nostepinne will solve your problems with knotty, gossipy yarn. https://www.youtube.com/watch?v=f3XFTyvIiCk