Have the Adults Left the Room?


The Reverend Anton Jacobs, a good friend, recently wrote an article which he titled, “Tis the Season to be Outspoken.” In the article he wonders if perhaps we in the U.S. are not suffering from what he calls “cultural pollution.” He asks, “Have we so filled the air and our minds with lethal doses of vitriol that we have lost the capacity to think critically?” To paraphrase a prominent politician who has contributed his share to the verbal smog, “Have the adults left the room?” We seem to have reduced everything to a sports metaphor and made it all a game of winning and losing. Success is measured by ratings, opinion polls and money.

In this hectic U.S. political season words become missiles flying fast and furious with little regard for their accuracy and even less concern for so-called collateral damage. One vituperative barrage simply invites another as people compete for airtime, media attention and money. The exchange escalates as political candidates and their surrogates search for new and more compelling ways to sharpen their attacks and raise record amounts of money. The money does not “buy” votes. There is no quid pro quo. When politicians claim that their votes are not for sale, I believe them. They are voting their conscience. But that does not mean that money does not buy access and influence. It does. Politicians know what their major donors think about issues and they are sensitive to donor concerns when it comes to writing legislation. When it is time to cast their vote the politician votes his or her conscience, which has been formed and informed by what other people who know the issues and who are well- known say about it. 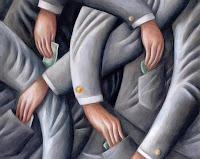 While I was thinking about the power of money in politics I found myself reflecting on a question that Chris Hayes posed on his Sunday morning television program, “Up with Chris Hayes.” On October 14, 2012, Hayes asked, “If money is speech when does free speech become coercive speech, and how can we tell the difference between them?” That is an important question, which he elaborated on with a series of follow up questions. Suppose the boss tells the people who work for him which candidate he favors in the upcoming election and he encourages them to vote the same way? Is that free speech? Suppose he tells them that their future employment hangs on the outcome of the election? Has he crossed the line? Suppose he tells them that they must put their personal feelings aside and take the day off, without pay, and pose in a campaign commercial for the candidate he is supporting? The workers are told that attendance is mandatory and it will be taken. Is this free speech?

All of these hypothetical situations actually happened and Hayes documented each of them. The last scenario referenced a Mitt Romney commercial that featured blue collar union members who were obligated to pose for the picture with the candidate. Romney did not object. In fact he is smiling in the commercial. Which leads me back to the beginning, “Have we lost our ability to think critically?” Have the adults left the room? 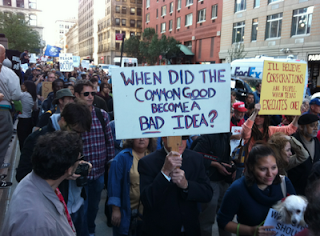 When the cultural is so polluted by money and its coercive power what are we to do? My suggestion is that it is time to open the windows and doors and invite the adults back into the room. The Church Fathers (sorry, but the major writers whose work has come to us from this period were men) knew how to think critically and speak prophetically. From the second to the fourth centuries they wrestled with the problem of private wealth and its coercive power in the public square. They did not object to private wealth or condemn it. But they did insist that those who had such wealth bore a special responsibility; they had a moral and civic obligation to respect the human dignity and value the equal worth of others. More than privilege, wealth meant public responsibility and public accountability. These great scholars developed what one contemporary writer calls “a theistic ethic of ownership.” Ambrose, who became Bishop of Milan around 370 C.E., exemplified this ethic when he wrote, “Just as idolatry endeavors to deprive the one God of his glory, so also avarice extends itself into the things of God, so that, were it possible, it would lay claim to his creatures as exclusively its own—the creatures that he has made common to all.” (Charles Avila, Ownership: Early Christian Teaching, Orbis Books, 1983, 78).

With the passage of time the theistic ethic of ownership proclaimed by Bishop Ambrose and other spiritual guides of the Patristic Period was either forgotten or it became what Avila calls “an uncrucifiable generality.” In today’s culture of winners and losers it is one of the church’s best kept secrets; but it need not remain so.