After more than a dozen trips to India, I got used to questions from Mid Westerners about "sacred cows." The question was usually framed like, "Well, if they have so many hungry people, why don't they eat those cattle?"

Most folks didn't know that muscle was the foremost energy source in India, and cattle provided a lot of the muscle. An Indian farmer behind cattle can plow as proper a furrow as any John Deere and with a lot less fossil fuel expense. I've seen them do it. And many a cow still turns the water wheel to water the fields. 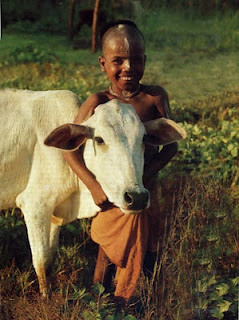 Cattle in rural India also provide a basic resource, dung. In rural India, dung is used for fuel for cooking, glue for the walls of the home, fertilizer for the fields, and food for the biogas facility.

In India, cattle provide milk for the children and the rest of the family, perhaps when other sources of nutrition are few and far between. Once, sleeping in a peasant hut in a poor village, I shared the space with the family cow, who kept me awake all night chewing cud. The cow was part of the family, not like a pet but more like an honored guest. The milk didn't need refrigeration because it was fresh in the morning right in the hut.

Cows are still sacred in India at least partly because they are a primary contributor to sustaining life in rural areas. People all over the planet often honor those elements of creation that make life possible and revere them as sacred.

Sacraments are essential to human wholeness and health. Hindus revere the cow, as they know the contribution it makes to human life and how essential it is to human health and wholeness. And Native Americans in our part of the world revered the bison, from which they gained their livelihood, not only for food and clothing, but for shelter and many other human needs.

In our own culture, even if you don't agree with the politics, one has to admire the position of the Roman Catholic Church on how all life is sacred, from the womb to the tomb. Even though some followers seem a lot more concerned with the unborn than with the murderer on death row or the malnourished in the inner city or the drone victim in Afghanistan, at least the teaching of the church is consistent. All life is sacred.

Occasionally, some may be reminded that bread and wine are basic necessities of life, maybe even reflecting on the deeper meanings of those "sacraments" in the beliefs of the Christian church. But for the most part, our culture doesn't encourage a sacramental world view; rather, it's an exploitative one.

In a throw-away culture like the one we live in, not much is sacred. A materialistic world view says everything is there to be used for our benefit and disposed of as we see fit, even other people. I'm convinced we desperately need to reclaim philosophical and religious understandings about the sacred! We ignore it at our peril.

I'm especially thinking about the earth and earth elements. We need to reclaim an understanding of the sacredness of Creation. Take water! It's that substance that makes up about 70% of the human body. You would think we might consider it essential to the maintenance of life on the planet, and our life, and therefore treat it with respect; perhaps even consider it "sacred."

Five water articles crossed my desk in rapid succession this past week. The first was about "water wars." The national security establishment in our country is concerned about water resources and has issued a disturbing report. 47% of the world's population will be living in water stressed areas in 2030. Conflicts and environmental refugees are inevitable.

The second article was about how Wall Street and private equity firms are targeting municipal water systems. With tight budgets, some municipalities are turning to privatizing city services, with the end result of higher costs to consumers and greater control of water resources by corporations.

The third article was about the tar balls and oil coated birds turning up on Louisiana shores after Hurricane Isaac. Twelve miles of beach was closed by local authorities and fishing prohibited up to a mile offshore around Elmer's Island, south of New Orleans. It belies all those BP commercials one sees on TV about clean beaches and healthy seafood.

The fifth was about the millions of gallons of water used in hydraulic "fracking" operations to extract natural gas, that are so polluted by toxic substances used in the process they are simply buried underground. Hopefully, the water doesn't leak into aquifers or other clean water sources. The companies say it will remain in its grave forever, never to see the light of day or rain clouds again.

At the rate we're going, without a new perspective on the sacredness of creation, especially the water of life, we'll desperately need to look for some signs of moisture on Mars. 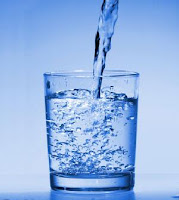 But let's not agonize. Let's organize. No politician these days, or corporate CEO, or college President, or investor should be able to avoid questions about what's "sacred." Is there anything sacred? And if so, how will our decision makers implement that understanding in the everyday work they do? How can you and I integrate an understanding of the sacred?

Perhaps you and I can begin by drinking a cool glass of water, or washing our face, or watching the rain fall, and giving thanks for a life giving blessing.