Many years ago a cartoon possum named Pogo famously said, “We have met the enemy, and they is us.” It is one of the most memorable statements ever made in the cartoon world. Recent scenes of my neighbors taking to the streets in acts of violence reminded me of Pogo’s wise words from so long ago.

In July of this year I was in a primary race running for an elected office. In campaign mode I was walking my districting knocking on doors and introducing myself to everyone I could meet. Most of the conversations were positive and I found the experience rewarding. It is an honor and an education to run for elected office. One morning I was sitting in a local restaurant visiting with the owner. I wanted to put my yard sign on his property. He wanted to talk. I was answering his questions and learning about his concerns when he pulled a .45 caliber pistol from behind his back where he had it tucked into his belt, placed it on the table between us and began to caress it. “Everyone should have one of these,” he said. “Every teacher, every preacher, every student, every one should have one of these.” 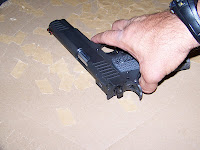 He meant his act to have shock value, but he was way off target. In our fair city of 380,000 the police have shot and killed eight people in the first six months of this year—all acts of self-defense. Outraged parents and citizens are protesting police violence. At least one inmate has died recently while in police custody and “problems” in the jails are frequent. Meanwhile, the city’s “entertainment” district seems to be reverting to the days of yore. We have had a steady diet of shootings on Friday night when the bars close. Things got serious when someone fired three shots at the police. There are now cameras on every lamp post and more police on every block. City officials are holding special meetings as they look for ways to gain control of the situation. Yet, in another part of the city only a few weeks ago a six year old girl was killed in her sleep when someone shot up her mobile home in a random act of drug-induced violence.

Beyond the borders of our fair city, the idea that we are locked in a perpetual state of war has broad bipartisan support. When President Truman sent troops to Korea in 1950, he said it was a “police action” and, therefore, he did not need congressional approval. When President Nixon invaded Cambodia he justified the attack as a pre-emptive strike. President G.W. Bush used the same justification when he launched the second invasion of Iraq. President Obama has distanced himself from the “War on Terror” but he has embraced the doctrine of perpetual war. I remember that not many years ago when he was running for the Office of President of the United States, John McCain was heard singing, “Bomb, bomb, bomb Iran.” In the video of his performance he was smiling as he sang and people in the audience were laughing—they got the joke.

We are ensnared in what theologian and author Walter Wink called “the myth of redemptive violence.” The power of this myth was on full display when Donald Rumsfeld, then President Bush’s Secretary of Defense, spoke in glowing terms of “shock and awe” as pictures of carpet bombing flashed across U.S. television screens. I think it was shock without awe, which means “fearful reverence of something sacred.” At best, Mr. Rumsfeld was expressing an ideology of raw power, at a deeper level he was venerating an idolatry of redemptive violence, which teaches that if we are big enough, strong enough, mean enough and powerful enough we can vanquish all our fears and create a new Garden of Eden—at least for ourselves if not for others. Cartoonist Walt Kelly knew better when he wrote Pogo’s memorable sentence. There is a deeper wisdom.

At the end of the Civil War President Lincoln asked members of his Cabinet what action the government should take toward those who had tried to destroy the union. The Secretary of War, Edwin M. Stanton, told the president that we must teach them a lesson. Those who declared war on the United States must pay the price. They had forfeited their right to life. Those who tried to destroy us must now be destroyed. All the members of his Cabinet agreed. Lincoln then asked, “If we make the enemy our friend have we not thereby destroyed him?” Lincoln was asking for a new narrative.

In the early days of the Cold War, on April 16, 1953, President Eisenhower delivered a speech to the American Society of Newspaper Editors entitled, “The Chance for Peace.” He told the editors, “Every gun that is made, every warship launched, every rocket fired signifies, in the final sense, a theft from those who hunger and are not fed, those who are cold and are not clothed. . . . This world in arms is not spending money alone. It is spending the sweat of its laborers, the genius of its scientists, the hopes of its children. . . . This is not a way of life at all, in any true sense. Under the cloud of threatening war, it is humanity hanging from a cross of iron.” 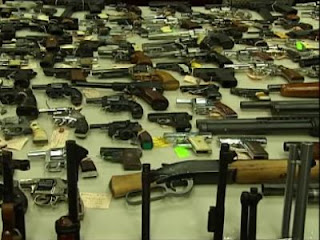 And on September 20, 1963, President John F. Kennedy spoke to the General Assembly of the United Nations. In his address, Kennedy said, “The badge of responsibility in our modern world is a willingness to seek peaceful solutions. . . . The problems of human destiny are not beyond the reach of human beings.”

It begins with me, with us and with our willingness to put our guns on the table and walk away, together. Wink offers the myth of redemptive love as the antidote to the myth of redemptive violence.  Every major faith tradition agrees for each one teaches us to treat our neighbor as we wish to be treated, or, more strongly, to love one another.

David Hansen
Posted by Carl Kline at 9:48 AM