My heart lifted like a small boat on the swelling sea, as I looked out from the long line of traffic approaching the harbor and suddenly saw her topmasts rising in the distance. We had come with so many others to see “Old Ironsides,” the USS Constitution, make her way to the sea to dance with wind and wave and sail free for only the second time in a hundred and thirty-one years. As a child I had loved going to visit the old war ship. I was enthralled with the sea and sailing, wooden ships with wings of canvas, “tar and timber, plank and sail,” as Maine singer/song-writer, sailor/poet Gordon Bok sings, all a metaphor for life, each of us with the dignity of a tall ship, ever seeking the “star to steer her by.” 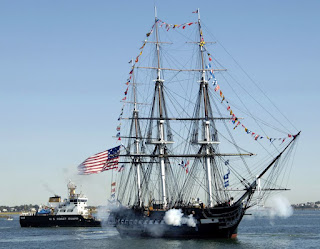 We made our way to the water’s edge along the sea walk at Castle Island. I could look across at Winthrop, the town where I had grown up and sailed from through high school, sailing then across the water and toward the very spot from which I now gazed through these mists of time. I felt awe-struck, filled with boyhood wonder, as I looked through the glasses and saw the old ship’s sails loosed to the breeze. Carried on the same wind that filled the distant sails, a rare sense of camaraderie fluttered among the disparate crowd gathered by the water’s edge. Binoculars were passed from one to another, strangers given a chance to take a look, impromptu history lessons and personal reminiscences freely shared. Tethered again to her tending tugs, the procession hove into the channel to head for home, the grand vessel now seeming so close. With a swing of the wheel and a nudge from the tugs, her bow was turned to face Fort Independence on Castle Island. A carefully choreographed nineteen-gun salute was fired from a forward cannon. With the roar of each charge came a roar from the crowd, a tongue of flame flashing from the muzzle of the gun.

And then something happened within myself. How could I join with a crowd to cheer the firing of a gun? I had tried to avoid the truth that however old this was a warship, her glory and fame gained in battle and meant to inspire a nation when at war. I imagined the ship two hundred years earlier to the day in her battle with the British frigate Guerriere. It was then she acquired the moniker, “Old Ironsides.” Romance merging into naught, like the downward side of a cresting wave, I closed my eyes and squinted upon the carnage and gore, scarcely able to look, each ship’s decks flowing with blood. I imagined the terror that must have filled many a sailor’s heart, cannons blasting away, not with blank charges in salute. I wondered who the sailors were, how many on the British ship may have been “pressed” into service, drugged or beaten and carried off by a “press gang.” And of the American sailormen, how many wished they were back behind the plow, would this be the way of the nascent nation or a passing cloud, rays of sunlight upon another path soon to be revealed?

There is no escaping when the battle is at sea. And upon the land, though a road may beckon, terrified soldiers have fared no better.  It would seem absurd to imagine soldiers taking leave with their officers’ blessings before the battle begins. Yet this is exactly what happens in an amazing enumeration of battlefield deferments in the Torah portion of that, Parshat Shoftim (Deut. 1-8). Before the ensuing storm, the officers are to call out to the gathered troops, who is the one that has built a new home and not yet dedicated it…; and who has planted a vineyard and not yet enjoyed its fruit…; and who has betrothed a wife and not yet consummated the marriage…? An ultimate affirmation of life, a greater purpose upon this earth than to kill and be killed, each of these soldiers is to go home, lest he die in battle/pen yamut ba’milchama, and not enjoy these gifts meant to be his. And there is one more who is called upon to go home, the one generally regarded as afraid and fainthearted/ha’yareh v’rach ha’levav. The very same words can be translated quite literally as “of reverent and tender heart.” That they are not translated in this most straightforward way underlines the cultural assumptions of translators that things must be as they always have been. The recruit who is “of reverent and tender heart” is the one who commentators say is as afraid to kill as to be killed. He is the one the officers are most anxious to remove from their midst, lest he melt the heart of his brothers/v’lo yimas et l’vav echav, awakening a spirit of compassion, of horror “before the unsheathed sword.” The tender hearted recruit encapsulates the affirmations of life in each of the preceding exemptions. If we are to build, to plant, to love, then how can we be meant to kill? These questions emerge precisely in the midst of a Torah portion filled with violence. It is in the face of violence, that we are called to challenge violence.

In physical form, a Torah scroll is organic, of the earth and of people, of wood and parchment, of letters finely crafted, a scroll of life. Organic in spirit too, the Torah is its own call to transcend the violence within itself, a challenge gently uttered from the very beginning, when God’s breath hovered upon the face of the waters. A sailing vessel upon the waters is also a symbol of transcendence, pointing to another way. Only when everyone works together, will the ship come home, steering a zigzag course at times, not fighting nature or each other, but learning to cooperate with all. Crafted by human hands and ingenuity, of wood and canvas and rigging made of twisted hemp, an old time vessel is organic, like every human being, sailors all, whether aboard the Constitution or the Guerrier. And when at sea, a symphony of elemental harmony, the way we are meant to be, to work in accord with wind and wave, voices rising in chantey song to work as one, Old Ironsides her own call to all of us to transcend the violence that has been and is within.