Nonviolence, Chiapas and the EZLN


I was asked to write something about nonviolence for this blog. It was a challenge to come up with something that would not mention guns or physical force. After a long debate of what was I going to be writing about, I decided that I was going to write about what is happening in my own country.

First of all, I was born in Guadalajara, Mexico; but I have been here in the United States for more than half of my life. I was so indifferent to how my own people are suffering and struggling to survive. I started looking into how the most vulnerable Mayan Indian from a region in Mexico (to be more precise, Chiapas) were living in such deplorable conditions. Over centuries, the indigenous population of Chiapas slowly started losing control over their territory they cared for, for many generations. Many rebellions have happened and by the late 20th Century, the communities of Chiapas were living in extreme poverty.

People were lacking education, health care and social services. The rebellion started gaining strength and on the signing of the NAFTA (North America Free Trade Agreement) the uprising became a reality on January 1, 1994. The indigenous rose up and took over seven municipalities in Chiapas, Mexico, and declared their desire to become autonomous from the Mexican state. Two armed parties confronted each other, the Mexican Federal government and the Zapatistas, for over 12 days of combat. After a cease- fire, a truce was applied. Implementing the treaty, ink and words of rationalization were their weapons, but unfortunately their truce was broken a few times by the federal government. The Zapatistas only reacted to defend themselves with peaceful civil resistance. All they wanted was equal rights and better living conditions. Meaning, they wanted dignity, land, liberty and the ability to decide their own future. Many of their people had been murdered by the power of the military. Their war has been based in a nonviolent defense against all injustice situations. A number of clever tactics led the Zapatista movement to be an extremely valuable early example of non-violent activism using cyber space. 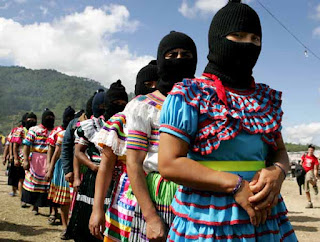 The organization taking control of the uprisings is called Zapatista or EZLN (Ejercito Zapatista de Liberacion Nacional) (The Zapatist Army of National Liberation) a revolutionary leftist. The group is mainly formed from indigenous people, but it’s leader is believed to be a foreigner. He is known as Subcomandante Marcos. The group is formed from many more supporters from different areas. The EZLN’s way of appearing in public is by wearing ski masks. Their training on military strategies is very strong. They are keeping a very strong treaty with the Mexican Government since 1994. As a non-violent group, they are using the Internet as a tool to communicate with the international media and activism groups to provoke external political pressure for the changes that they want. These changes include increasing the presence of the indigenous population of Chiapas in politics.

In addition, Subcomandante Marcos traveled around the country for indigenous rights. The EZLN also operates a radio station in Chiapas, that broadcasts in Spanish and several local languages. The group is a favorite of anti-globalization activists from around the globe and EZLN group members. Subcomandante Marcos is currently touring Mexico raising awareness and political and ideological support for their cause. Due to its political aspirations and the 1994 truce, the EZLN is not expected to engage in any major attacks in the near future. 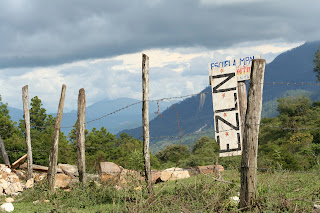 That for everyone there will always be bread to illuminate the table.
Education to feed the mind.
Health to scare the dead.
Land to harvest our future.
Roof to cover our hope
And work to dignify our hands.

Maria Escamilla, Guest Blogger
Posted by Carl Kline at 8:45 AM