Fast for the Earth

Today begins a Fast for the Earth  www.fastfortheearth.com  We are holding a "launch  week" here in Brookings, South Dakota. Some will do a water fast for the seven days. Others will fast for a meal or a day. Some intend to fast from driving. The week will be full of educational and protest activities focused on global warming. 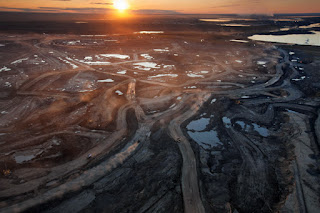 We, like others around the globe, are facing the continuing pillage and destruction of the planet by the fossil fuel industry. They have constructed one pipeline through our state already that has had twelve spills in twelve months. They are planning a second, carrying tar sands oil from Canada to the Gulf of Mexico. James Hansen, a leading climatologist has concluded, if those tar sands are developed, it's "game over" for the planet.

We are already experiencing the front end of climate change in the plains states. We are in a record draught, with the heat index regularly in triple digits. Corn is withering. There is nowhere for livestock to graze. The West is literally burning up with wildfires.

In the meantime, as Bill McKibben has so aptly put it, "As Colorado Burns, Washington Fiddles." It's no wonder! Exxon Mobil is the most profitable corporation in the history of the world. Even after a horrific oil spill, BP is still making profits. The most powerful lobby in human history has plenty of money and influence to spread, in Washington, in Toronto, in the South Dakota legislature and Governor's office.

Voices for the common good are slowly being raised. Our numbers are increasing. We are global in nature. People have signed on to the fast from several different countries, all concerned about the poisoning of our homes. We will continue to grow and encourage each other, for this fast is perpetual. We intend to have a person or group fasting each and every day, for the healing of the earth and the healing of human beings; till we no longer put profits ahead of people, exploitation over care for the earth.

A renowned activist for the earth, Cesar Chavez, has this to say about fasting. 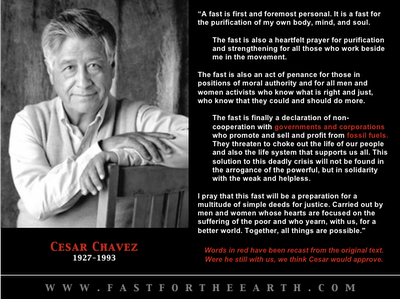