Pastures of Plenty: Woody Guthrie & the Song of Torah


What is the power of a song? What is the power of a song to touch us so deeply, to bring us home, to soothe, to dream, to inspire, to love? Is it simply, or not so simply, a matter of association, as with smells, memories evoked of other times and places when the same tune, the same words were heard and with whom? Or is it all of that and more, something deeper, something that touches the protoplasm of our emotional being, the universal stuff of life? Rebbe Nachman teaches, a nigun and musical instruments have the great power to draw a person to God/l’hamshich et ha’adam la’shem Yisborach. The Torah itself is called a song, given over to our singing and living in accord with its tempo and tune, at times to be the harmony. The rabbis say that God created the world only for the sake of song and singing/bishvil shira v’zimra. 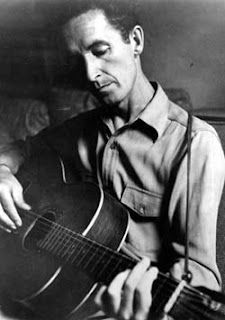 I was transported by song one recent night. My wife and I went to a performance of “Woody Sez,” a musical biography of Woody Guthrie, celebrating the centennial of the great American balladeer, prolific songwriter, social critic and activist. I wasn’t expecting to cry, but I did. Admittedly, it doesn’t take much. Woody’s own life was hard, touched by so much tragedy, close at hand and in the world all around. His refrain was always to keep going, singing as though just to me over the years when times were hard, but no where near so hard as his, filling traditional lyrics with his own wisdom, “it takes a worried man to sing a worried song, I’m worried now, but I won’t be worried long.”

The music took me home, way back toward the beginning. I first heard Woody’s music when I was ten years old. My mother was in the chorus for a production called “Bound for Glory,” a benefit concert to raise money for the Guthrie family while Woody was still alive, though dying then from Huntington’s disease. The concert was in the YMCA on Huntington Ave, just about around the corner from where I live now. It seems like it was just around the corner in time, as well. My friend David and I, whose mother was also in the chorus, sat on the floor right in front of the stage, singing along as we learned the songs, imbibing their message. While they can be entertaining and make you feel good, these songs are never just about entertainment, but about values, about life as lived by real people. Woody would have cringed to be called an entertainer. He was a people’s artist, an organizer, a comforter and soother for all the pain that comes with life, and he was a firebrand whose light shines across generations of social consciousness. The music washed over me. I sang along with the old songs and I cried.

It is all Torah, the soft and the hard, the bitter and the sweet. It is the Torah of life, diverse facets of my being, yet seamless. I heard the words at the end of the “Ballad of Tom Joad” and took out pen and paper there in the dark, “Everybody might be just one big soul, Well, it looks that-a-way to me. Everywhere that you look in the day or the night, That’s where I’m gonna be, Lord, Lord, Yeah, that’s where I’m gonna be.” That protoplasm of life, humanity joined together wherever we are, with each other and with God. I thought of the morning blessings that praise God as the Life of the universe/chay ha’olamim.

Wherever we open Torah, the Torah opens up to wherever we are. In the weekly Torah portion that week of the concert, Parashat Naso, there are teachings of peace, May God’s face be lifted up to you and may God grant you peace, whole teachings opening up from there. There is teaching of human sharing and equality, competition giving way to cooperation that none be shamed or diminished, the leaders of every tribe bringing the exact same gift for the dedication of the sanctuary, not about plaques upon the wall but of honoring equally each and every one. The leader, nasi, is one who lifts up the people, making each one count, as in naso et rosh/lift up the head, a technical term for taking a census at the beginning of the portion. These are all teachings Woody would have loved. He reveled in diversity, learning from the people wherever he went, “from California to the New York Island, From the red-wood forest to the Gulf Stream waters….” From Parashat Naso, the rabbis weave a tapestry of multi-hued strands become as one, diversity of thought and insight underlying the gifts that each tribe brought. From this portion they taught, shivim panim ba’Torah/there are seventy faces in the Torah. We are all one, with so many different ways of being, and of seeing and understanding. The rabbis teach further, shivim panim shel shivim lashon/seventy faces of seventy languages. Seventy languages refers to all the peoples of the world as the rabbis knew it, so much that is different, all as one in the essential stuff of life. Of God’s dividing Israel into twelve tribes, the Slonimer Rebbe leads us to see that God creates diversity so that we will create unity, haray r’tzono Yisborach b’achdutam/the desire of the Holy One is for their unity. 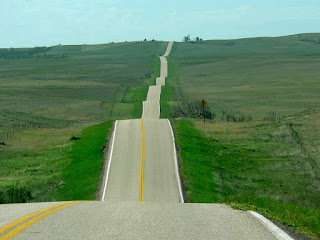 Torah is a radical song if we really hear it, like Woody’s songs, at times a bit more subtle. At other times boldly challenging, lifting our eyes to see beyond barriers that some would set to keep others out, of fields that are open to strangers to gather and glean, “my pastures of plenty must always be free,” God’s challenge to share the earth’s bounty. Among the last verses of “This Land is Your Land,” words not generally sung in school assemblies: of a sign that said No Trespassing, “but on the other side it didn’t say nothing, That side was made for you and me;” and of hungry people “in the shadow of a steeple,” Woody wonders for all of us, “Is this land made for you and me?”

As our own lives unfold over time, so too the world. Torah speaks to our hearts, to comfort and soothe, to challenge and prod, the power of song to transform and transport, of times long past and times yet to be, walking and singing together all along “that ribbon of highway.”