Reaching Out & Drawing Near


A time of much reflection, feeling the depth of human connection, the sting of separation more sharply, hope and worry for our little one, the nature of the world and of people in relation to each other, so many thoughts turning in every moment of pause during our visit to Los Angeles to welcome our new grandson. Mieke and I stayed in a small, very simple European style pension, seemingly out of place in LA. A reasonable walk to our kids and to a nearby synagogue, it was not the mezuzah on the front door or the included kosher breakfast that had initially drawn us. There came to be the pleasantness, the warmth of something familiar, though, as we sat each morning over an Israeli style breakfast of chopped tomato and cucumber with cottage cheese and hardboiled eggs. On the morning of our last day, we came wistfully into the dining room, sitting down in a corner by a window that looked out onto a narrow courtyard. Only a few feet away through the closed window there was a glass-topped table with a green umbrella spread over it, outdoor furniture speaking of warmer weather than the unseasonable cool and gray of a May morning in southern California.

A teaching of connection played out before us, or in the distance bridged, perhaps it was for us. Sitting at the far side of the glass-topped table, so that he was facing us, was a traditionally garbed Chassidic Jew wearing a black silk caftan and a black, wide-brimmed hat. His face was framed by a long, bushy red beard, and rope-like side-curls. His eyes danced from behind the lenses of large wire rim glasses. Sitting nearest to the window with his back toward us, was a man of unkempt brown hair. He was bare headed and held a cigarette between his fingers, raising it occasionally to his mouth, a puff of smoke rising to the dome of the umbrella. It was clear that he was a secular Israeli, both from his manner and from the occasionally audible words of Hebrew spoken between the two men. On the glass-topped table there was a cell phone, a small brief case, a blue package of Bugle cigarette tobacco, and a sefer kodesh, a holy book. As it faced me, I could just make out the name of the book on its spine, Sefer B’nei Yosef/the Book of the Children of Yosef.

It was an animated conversation, either man alternately raising his arms, holding them up wide, expansive, to make a point. Each was clearly of expansive heart, embracing the other from his own place and way of being. A word floated through the glass from time to time, feather-like, alighting on the table where we sat on the inside, though it came to seem that it was really we who were on the outside. From the Chassid I heard such words as, doresh/seek and makor/source. From my Bar Mitzvah chanting so long ago, the question came to me as asked by the prophet Micah, mah HaShem doresh mimcha/what does God seek of you? I thought of Torah and of God as makor mayim Chayim/the Source of Living Waters. From the other man I could hear an entire question: mah ha’olam ha’ba/what is the world that is coming? Alas, I could not hear the answer.

Opening the book, the Chassid pointed with his finger, unconcerned that the other was bare headed. He brought to mind and gave substance to one of my favorite Chassidic teachings, a sermon of the Degel Machaneh Ephraim. Rabbi Moshe Chaim Ephraim of Sadilikov was the grandson of the Baal Shem Tov, the founder of Chassidism, and an uncle of Rebbe Nachman of Breslov. It is a teaching of great warmth concerning the two sons of Joseph, Ephraim and Menashe, of whom the title of the book on the table clearly referred. When Joseph brings the two boys to receive his father’s blessing as he lies on his deathbed, Jacob does not recognize his grandchildren. Having been raised far from Jewish life, they appeared to him as Egyptian royalty. As the poignant story unfolds in the Torah, Jacob asks, mi eleh/who are these? Realizing they are his own, however distant, Jacob drew them near and kissed them and hugged them. On these words, the Degel Machaneh Ephraim says, v’zivug rucha b’rucha/he joined with them spirit to spirit. Through the title of the book on the table and the sharing witnessed beyond the glass, I thought too of Rebbe Nachman’s teaching that grew out of his own respectful encounters with free thinkers and non-believers, every way of wisdom that is in the world has its own special song and tune/yesh la zemer v’nigun m’yuchad. 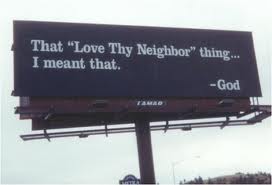 I thought then of how it all came together and illustrated the best understanding of a very familiar verse in this week’s Torah portion, a double portion, Parashat Acharei Mot-K’doshim. Culminating a lengthy series of teachings that bear on human relationships are the words, v’ahavta l’rey’ahca kamocha/and you shall love your neighbor as yourself (Lev. 19-18). Remarkably, the beauty of these words is easily abused, understood narrowly by some teachers and commentators. The great Maimonides understood love of neighbor so narrowly as to refer only to another observant Jew. Presumably for its expansive nature, Rabbi Akiva called this verse the great principle of the Torah. Concerned for the possibility of a narrow understanding of neighbor, Ben Azzai countered that a greater principle of Torah is found in the seemingly obscure verse in Genesis (5:1), zeh sefer toldot adam/this is the book of the generations of Adam. Clearly a reference to all humanity, this verse cannot be misunderstood.

In the scene that unfolded before us, and so clearly for us, beyond the glass so near, it was a Chassidic tale in real time. In the embrace of two Jews so different from each other, the best understanding of Rabbi Akiva’s teaching. And if we can learn to love each other beginning with those nearest to us, however far, so too the teaching of Ben Azzai, we shall write the book of the generations of Adam, the story of all humanity. Approaching the hour of separation from the new little one in our lives, it was a gift that came to soothe our souls that morning. It was a teaching of wholeness, of reaching out beyond whatever the distance might be, of time and space and ways of being in the world, reaching out and drawing near, to kiss and embrace.