I Beg to Differ


Note: This is a "letter to the editor" that I submitted this week to two South Dakota newspapers following a "United for Women" March and Rally, held last Saturday here in Brookings, the small city in South Dakota where I reside. The letter was my public response to recent comments made by our state's lone representative to the U.S. House of Representatives, Kristi Noem. Though prompted by events in South Dakota, it may be equally germane within your own community, well beyond this isolated town in the upper plains. 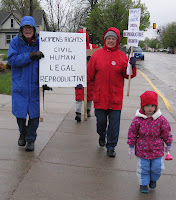 On Wednesday, April 25, South Dakota Representative Kristi Noem called concerns for women’s rights a “sideshow” and chastised her constituents for “wasting” their time in standing up for them (Sioux Falls Argus Leader). This was only two days after I had sent her office a news release about Brookings’ upcoming “United for Women” march and rally, held this past Saturday. Part of a national day of rallies for women’s rights, our Brookings event focused on the right to (1) accessible and affordable health care, including contraceptive and reproductive services; (2) to equal pay; and (3) to freedom from violence, in public and in the home.

Perhaps the timing of our good Representative’s remarks, coming as they did on the heels of our rally announcement, was simply coincidence. Nevertheless, as only one of her constituents who turned out for the Brookings rally on a dreary day with fire in my belly, I respectfully disagree with her notion that our concerns are but a “sideshow.” Women in America are seeing a major erosion of their rights. To offer just a few examples:

Due to new state laws passed in record numbers around the country, many of us will be experiencing major limits on our contraceptive and reproductive choices. In some states we will even have to ask our employers to cover our birth-control pills (men, meanwhile, will not have to ask their employers for Viagra coverage).

Women with low incomes are now in danger of losing vital health services funded through the Title X Family Planning Program, which some politicians are threatening to eliminate. Title X does not fund abortions. It does fund gynecological exams, contraceptive services, pre- and post-natal care, screening for breast and cervical cancers, and much, much more. All of these services will be gone if certain politicians have their way.

Women are at risk of not having the Violence Against Women Act reauthorized by Congress—this, despite the fact that the law has been incredibly successful, helping to reduce the rate of non-fatal domestic violence against women by 63% since its passage in 1994.

Women are paid much less than our male coworkers for doing the same jobs. And now we’re seeing rollbacks in “equal pay” gains that had been made in some states—for instance, Governor Walker recently repealed Wisconsin’s Equal Pay Enforcement Act, saying it “clogs the courts” with lawsuits.

In addition to experiencing such erosion of their rights, women in the middle and lower classes will suffer, as will their families, if we allow Congress to pass more unfair austerity measures. Such measures decrease government spending for social programs, education, roads and bridges, and other essentials that a vibrant society needs, while at the same time we continue to pour money into endless wars and to reduce the amount of taxes upon the wealthiest among us. Our nation’s burdens are gradually being shifted to our most vulnerable citizens. I believe that those burdens should be fairly distributed among us all, according to our ability to shoulder them.

I would point out to my sister Kristi that according to various studies, South Dakota currently ranks (with #1 being the “best” among the states):

…shall I go on? Obviously we have some significant work to do in this state in support of half its citizens.

What benefits women ends up benefiting us all. That has been proven over and over again, in this country and around the globe. Am I wasting my time standing up for women’s rights here in South Dakota? No. I’m investing it. For the sake of my family, my community, my state, my nation, my world. And I’m far from alone in making that investment.

What you call a sideshow, my dear Kristi, is one of the main events. You’ve got a ticket, and there will always be room for you in the tent. Come on in!