"Whenever there is distress which one cannot remove,
one must fast and pray."
(Mahatma Gandhi, Young India: Sept. 25, 1924) 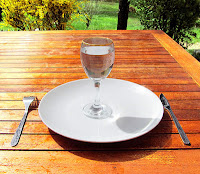 As a friend and I were talking recently, we imagined a map of the planet with all of those places destroyed (like the area around Chernobyl or the oil polluted lands left in Ecuador by Chevron), and all of those places damaged (like the Gulf of Mexico after the BP oil spill or the lands and waters damaged from the nuclear catastrophe at Fukushima), and all of the planet threatened by exploitation and plunder (like the tar sands oil fields in Canada and the Keystone XL pipeline planned through our state of South Dakota). We recognized in a new way how the earth is being ravaged and all life is increasingly in jeopardy.

The engines of this destruction are many and powerful, including our own participation in a culture of materialism and waste. Many see this destruction and the forces arrayed to perpetuate it and resign themselves in despair and silence.

But we need not be silent, nor need we despair. We can engage in an age old practice used by every religious tradition in times of spiritual need, the fast. It is a discipline for purifying the self and calling the society to its best behavior, in order to avert the harsh judgment of God (known to us in our time as the reality of climate change and the poisoning of earth elements like air, water and soil). Fasting is a practice a few South Dakota Native activists engaged in recently, in opposition to the XL pipeline and in kinship with a suffering earth. We can follow in their footsteps.

Some of us in Brookings, South Dakota, are calling for a "Fast for the Earth," beginning August 1, 2012. Most spiritual traditions recognize the role fasting can play in increasing human insight into our relationships with each other and the world around us.

For Jews, one might consider how Moses fasted twice, for 40 days, that the Hebrew people might be able to understand and follow the way of Yahweh. Or how both Joel and Jonah called for fasting in order to avert the judgment of God.

For Christians, there are indications in both the Hebrew Scriptures and the Christian New Testament that fasting was an accepted practice for strengthening one's spirit and commitment to spiritual values. Jesus, like Moses, also fasted for 40 days and resisted the principalities and powers with all of their temptations.

For Muslims, this "Fast for the Earth" will be occurring during the month of Ramadan. In Islam, all of the faithful fast from sunup to sundown. It's not only a physical discipline but a mental and spiritual one as well.

For Buddhists, one might consider the teaching of the Buddha to avoid eating after the noon meal for health and well being. One is prepared by fasting to exercise self control and increase compassion.

For Hindus there is a long history of fasting on special holy days; and often weekly on one day of the week.

Perhaps the person who is most able to speak a word about fasting to our contemporary personal and social concerns and condition is Mahatma Gandhi. He was able to incorporate fasting into his life in such a way that it communicated both interior and exterior change and growth. Listen to some of his thoughts on the subject.

"No matter from what motive you are fasting, during this precious time think of your Maker, and of your relation to Him and His other creation, and you will make discoveries you may not have even dreamed of." (Young India: Dec.17, 1925)

"There is nothing so powerful as fasting and prayer that would give us the requisite discipline, spirit of self-sacrifice, humility and resoluteness of will without which there can be no progress." (Young India: March 31, 1920)

"If a Satyagrahi once undertakes a fast from conviction, he must stick to his resolve whether there is a chance of his action bearing fruit or not. He who fasts in the expectation of fruit generally fails. And even if he does not seemingly fail, loses all the inner joy which a true fast holds. (Harijan: May 21, 1938)

Coupled with a prayerful concern for the healing of the earth, fasting can strengthen us to resist the principalities and powers that close our eyes, seal our lips and harden our hearts to the devastation going on around us. Join the "Fast for the Earth" for as long as you are able, as often as you are able.