Turning of Hearts & the Rising of Light

It begins late on a Monday afternoon, at the very last session of the JStreet conference, which I attended in Washington. So many words spoken, so many images, ancient tensions stark and grainy, rolling forward like the flickering frames of an old film, the projector running on its own, overheating. Words of pain, words of hope, images rising on wings of speech and from the printed page, leaping from the video screen, a new medium and still the same faces, of Jews and Arabs, a landscape of aching beauty and jagged boundaries of psyche and soul and sacred space. Images of Palestinians evicted from family homes in Sheikh Jarrah, of Israelis bereft at the fraying of democracy, of children begging to understand the world inhabited by themselves and the other.

A certain calm pervaded the proceedings, inevitable, necessary perhaps, the violence so far away, need for clarity in order to seek the way. The mood seemed heavier to me than last year, perhaps a rising up from within myself, though too palpable not to have been real, the unspoken fears, the weariness and worry felt by all. In the presence of Israelis and Palestinians of so many strata, officials and writers, academics and activists, striving and struggling daily, despair not an option, pleading for us to do the same. Beyond the policies and the politics, in the beginning and in the end it is about people and the human toll, of hearts that yearn to turn to each other, to live and to see a new day rising, to be safe at home among one’s own and with the other.

At that last session on a Monday afternoon, attended mostly by rabbis, I sat pensively, so many thoughts turning as I listened to colleagues share the challenges of speaking publicly about Israel. As we came near to the end of the program, I looked toward the door, planning to exit quickly in order to make my way to the airport. There were two young women standing at the microphone in the center aisle, the program chair announcing that theirs would be the last two questions. For a moment, I thought I would quietly leave before they spoke, but then thought better of it. The first challenged the rabbis present, accusing, why hadn’t we told her what to expect in Israel, “why didn’t you tell me the truth?” She referred to being at the Kotel, the Western Wall, her horror at seeing women arrested for praying while wearing the traditional garb of a talis, a prayer shawl, a woman bundled into a police van while cradling a Torah scroll in her arms, herself threatened with arrest if she didn’t wrap her talis around her neck like a scarf, to be worn in the way of women, not as she had been taught it should be worn, as a garment of prayer.

My head was down, my eyes closed in thought, as the next young woman began to speak. I was jolted upright by the power of her voice, by her stance at the microphone, her words more of pleading and pain than of anger. I couldn’t quite see her face, sitting somewhat to the side and behind her. And then she said it, not accusingly, but pleading for help to find her way home. She had lost her left eye to an Israeli tear gas canister at a demonstration on the West Bank. My sadness from the first student congealed into a frozen sea of pain. I turned in my seat, leaning forward, needing to look at her, unable to look for shame. She had gone to Israel to study art at the B’tzalel Academy in Jerusalem. We send our children to Israel to study, to grow, and we should also want them to feel the pain. But not like this! Then I could see the left lens of her glasses, swirling lines painted in black and white filling the space that was no longer a window to the world, but now in vibrant witness a window to her soul.

For all of the words spoken at the conference, the words of this young woman were the most powerful, tearing at my heart, bringing home more than any others why we had come to Washington. It was not only her words, but it was her courage and grace in getting up to speak at all, to tell her story in its essence, so simply and so starkly. I tried to imagine her struggle against alienation from her own people, from Israel, from God. It was violence at the hands of her own people while pleading on behalf of others that has scarred her for life. I wanted to scream out for her, to offer a hand, to light the way home. As the session ended, I was only able to speak briefly with her and her parents before hurrying to the airport. I continued to think about her, hearing her voice and the urgency of her plea. 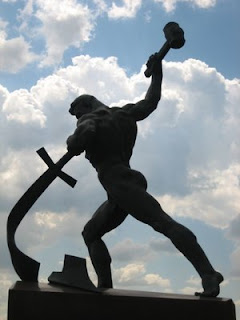 The week came to its end with Shabbat Hagadol, the Great Shabbat that precedes Passover. In the special reading from the prophet Malachi, we chant and make our own a vision of time to come, a time of swords turned to plowshares and spears to pruning hooks. It is a vision that begins at home, among our own, the making of peace with those who are closest to us, Behold I will send you Elijah the Prophet before the coming of the great and awesome day of God, that he may turn the heart of the parents back to the children, and the heart of the children back to their parents/v’heyshiv lev avot al banim v’lev banim al avotam (Malachi 3:23-24). It is the day that is neither day nor night of which we sing in the Haggadah at the Passover Seder. We read in the Torah that week a beautiful phrase concerning the olah/ascent offering that is to burn on the altar through the night, kol ha’layla ad ha’boker/all night until the morning (Lev. 6:2). From the embers of that offering and the fire that consumed it, the new day’s fire is to be kindled. So foreign to us on one hand, and of the distant past, it is also of the future and a reminder to us in the moment to keep the flame alive. To kindle the flame of a new day is an act of hope. Of that flame that is to burn all night until the morning, the Ma’or Eynayim, Rebbe Menachem Nachum of Chernobyl, teaches that it is not only about the darkness of night: surely, it is also one’s own darkness that one is able to transcend and to make from it the morning light/v’la’asot memenu boker or.

And so I cried over an email as I read the words of a young woman for whom the world is a little bit darker than it once was. Transcending her own darkness, touching hearts and turning them, there is the rising of a new day’s light in the poignant yearning of her words:

“It's so hard to explain how I want to live my life to others who do not know what it is like to feel the weight of human suffering. Who don't know that my feelings for Israel-Palestine are far beyond politics…. I want so badly for Israel and Palestine to be free from horror. I want my life to start working again.”

On Shabbat HaGadol, approaching Passover, these words of a young woman of great vision formed my prayer for her and for all of us, that we might bear together the weight of human suffering until it is no more, that together we might create a world that is free from horror, a world in which the lives of young people everywhere shall start working again as they were meant to be.