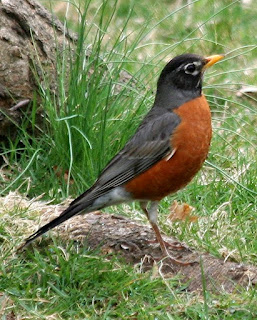 Sitting on the porch eating lunch yesterday, I was startled by a robin flying into the bush near me. It sat there looking around. I'm never clear exactly how birds are looking with eyes on each side of their head but I'm fairly certain it considered me carefully at some point, maybe noticing I was eating lunch.

The next thing I knew it was on the ground, doing that stop and run thing robins do. It would stand for a few moments, absolutely straight, then stoop its head and run fifteen or twenty steps. After three or four minutes of this, all within several feet of where I sat eating, the robin had lunch.

It pulled a large earthworm out of the ground and begin to peck it into smaller pieces. This it did for a bit, taking smaller sections of worm in its beak. But being hungry, I guess, finally quit the small stuff and slipped about three inches of worm down like slithering spaghetti.

I couldn't remember watching this kind of meal play out before so I asked my wife if she had ever watched a robin eat a worm. She said she had. Of course, she sees things I don't. As we stood at the edge of the garden earlier in the day, she made some kind of surprised exclamation, took the rake and uncovered the daffodils trying to get out from under the heavy leaf quilt. She saw the small green shoots. I didn't.

Thinking about seeing things in nature took me back to a visit several of us made to the Cheyenne River bison herd. We were with the keeper of the herd and looking forward to hearing about bison. Someone asked him about his knowledge of bison, where he got his education and what kind of reading he had done.

Since he had lived with the white world all his life he probably wasn't surprised by the question. But I think the questioner was surprised by the answer. The keeper got his knowledge of bison by observing them; as simple as that. How do bison families interact? You need to watch them, consistently, over time. How do you know if a bison is angry, or happy, or sad? Do bison show emotion? You have to be able to see bison, beyond our stereotyped notions, and over many hours, days, even years. The keeper knew bison, like some farmers still know their cattle.

I've learned some other things about seeing from Lakota/Dakota people. One learning is, your eyes are likely to be more open when your mouth is closed, a difficult thing to practice in our mouthy culture.

Another learning is it can be nice to communicate standing side by side. There's a freshness in standing next to a person looking in the same direction, perhaps looking at the same thing. Sometimes you don't even have to talk, just watch the same landscape and really see it.

My experience is that some people are so good as observers, they see so clearly, that they can even peer into another dimension. We have a word for them, seers.

These folks have an uncanny ability to move from our normal experience of space/time into 4D, maybe even 5D. 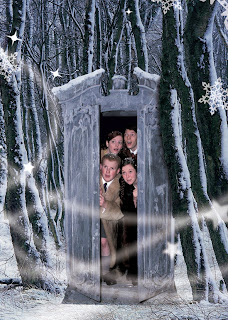 C.S. Lewis, in "The Lion, the Witch and the Wardrobe," the first book in his "Chronicles of Narnia" series, has that wonderful wardrobe where the kids go in the front doors, past some clothing, and out into another dimension. Wonderful! And it's not surprising his main characters are children. They haven't become so distracted and blinded by human constructions, yet, that they miss seeing and experiencing another reality.

I know people, especially those who have seen death up close, who I have caught looking off into the distance, quietly, as if they are observing that other reality. If you interrupt their gaze, which I usually hesitate doing, they might describe the luminosity of a color or a simple object that has suddenly become numinous.

Everyone goes through the wardrobe into another reality in their dreams. It's no wonder the Bible is full of dreamers dreaming important and life changing stories. Sometimes we see more clearly in the dream than in waking.

And there are other ways of exiting the back of the wardrobe that loom large in many spiritual traditions. They range from the meditation of a Zen monk to the prayer and solitude of a Trappist; from the sweat lodge ceremony of a Native American to the discipline of Ramadan for the Muslim; from the diet of a Hindu to the Ahimsa of a Jain; from the Torah study of the Jew to the ecstatic dance of the Sufi.

There are rituals and avenues the human community has discovered over the centuries to see, with eyes wide open, how simple things like the robin and the worm can help us start thinking and contemplating a deeper reality. Perhaps using these aids we will even be encouraged to explore the back of the wardrobe.