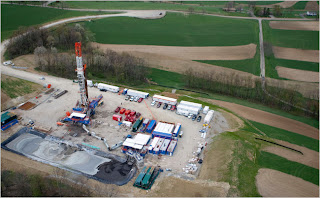 My dad and brother live in Bainbridge, NY. They are right in the middle of “fracking” country. “Fracking” - - it has seductive appeal in a depressed area where the promise of income for the use of farm land in order to obtain natural gas seems practical.

“Fracking” – it’s a process whereby millions of gallons of water and chemicals and sand are injected at high pressures into the earth’s surface in shale rock formations. Bainbridge is a tiny, depressed town - - built on shale rock. The “fracking” breaks open the rock and allows the release of natural gas.

“Fracking” fractures the earth. It depletes local water supplies. It produces hazardous waste that can contain radioactive substances. It produces toxic materials that can’t be treated by standard treatment plants. Most bizarre of all, it can cause the migration of natural gas into drinking water sources and has been known to cause homes to explode. When aquifers are contaminated, there is no possibility of cleaning them and reclaiming them. In the urgency to find alternate fuel sources, drillers are rushing to use the technique in new areas of the country without fully evaluating the effects on human health and the environment and without adequate government oversight.

When I drive through the beautiful hills in the Southern Tier of New York State, it is hard to imagine the violence envisioned for that mystical landscape in the quest for natural gas. It is a rape of cosmic proportions – not only of the earth, but of the people who live in the region. They are so vulnerable. There are not enough jobs. People have to travel long distances to find work. How simple it would be to sign on the dotted line with the drilling companies and enter into the prostitution of the earth just in order to survive.

The issue of drilling is fracturing communities as well. Every dilapidated barn has a huge sign, pro or con, emblazoned on its shabby walls. Front lawns are dotted with opinions on vinyl banners. Neighbors are in conflict and everyone is at risk.

This is what our fuel hunger does to us and to the earth – it fractures, breaks apart what is lovely and fragile – the earth herself, human relationships, human dignity. 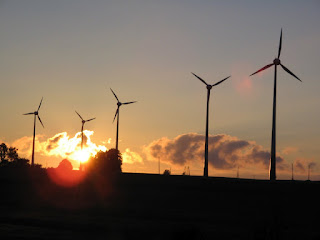 I think about all of this as I drive around my beautiful island home and I see windmills here and there. They represent the island’s desire to move toward sustainable energy resources. They are tall –reaching into the upper wind currents – spinning out their renewable energy day by day. They, too, are a source of controversy –a blight on the landscape, some folks say. But, to me, they symbolize a non-violent movement toward energizing our community so that we don’t have to resort to fracturing this fragile planet.