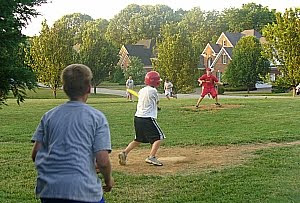 One of the things I remember most fondly about my childhood home in Randolph, New York, is the open spaces outside. To the north was a long lot where my father usually planted the garden. To the West was a large empty field big enough for a ball game.

Part of my responsibility as a family member was working in the garden. It's where I cultivated my love of tomatoes, ripe and freshly picked off the vine in the backyard. And even though I complained about the weed pulling and hoeing, the time spent outside with the vegetables is now a pleasant memory.

In the same way, I would often rush through my dinner to get out of the house to play ball. Every evening when there was enough light to see and there were enough kids from the neighborhood to make teams, we played in the big field. I'm sure I spent far more time playing outside than inside. If no one was in the field, you could often find a game of kickball at the playground, two blocks away. It was always dark when I heard my name called to come home.

I read an interview today with Richard Louv. He's the author of a book called Last Child in the Woods: Saving Our Children from Nature-Deficit Disorder. He attributes several of childhood ills these days to little time spent outside in the natural world, including psychological disorders, childhood obesity and attention deficit hyperactivity disorder (ADHD). According to Louv, parents and educators from all over the U.S. have communicated with him about how behavior changes in ADHD kids after they've had an experience in nature.

Children don't have to have Yellowstone National Park or the Badlands of South Dakota next door, although one would hope they might experience them as something other than an "in and out of the car" tourist. Certainly we need to do all we can to protect these wonderful natural environments from those who would exploit or damage them for private profit.

But all children can have some outside play space nearby. It may be more difficult in the city but planners can plan for it and developers can include it and homeowners can demand it. And we can get kids out of the city into natural environments. The Sierra club has a whole host of outings available, led by members and available to all. There are groups like "The Children and Nature Network," founded by Louv: www.childrenandnature.org that can help. 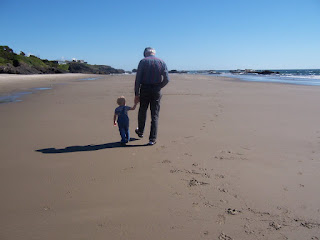 Nature deficit disorder need not be a legacy we leave our children. Our relationship to the creation around us is a significant component of a nonviolent lifestyle. If there's no opportunity for relationship we do violence to our children and grandchildren. Let's make sure they have spaces to be outside, to hear the birds, inspect the insects, climb the trees, and gather the flowers, the shells and the stones. They're gathering something even more precious in the process.