Of God's Promise and Ours 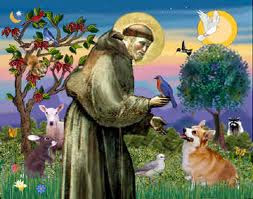 I had the opportunity recently to speak as part of an interfaith panel at a program sponsored by Franciscans at the St. Anthony Shrine and Ministry Center in downtown Boston. Participating in the discussion were the usual suspects, a priest, an imam, and a rabbi. The name of the program was, “Pilgrims of Peace: Reflections on Peace framed by the Abrahamic Traditions, Judaism, Christianity, and Islam. The gathering was held on the occasion of the 25th anniversary of the Assisi Interfaith Peace Gathering, convened in Assisi by Pope John Paul II on October 27, 1986.
Though I hope I can help to move others, I am not always especially moved as a participant on a panel. Last night was different. I was deeply touched by the sensitivity and the depth of thought and struggle shared by my colleagues on the panel. Speaking first, Imam Talal Eid, someone with whom I have been on other panels, managed to address a deeply challenging topic, the perception of Muslims as terrorists, with a remarkable touch of humor that set people at ease. He told of participating in a similar gathering at which a Hindu speaker preceded him. As words of peace were offered from the Hindu tradition, Imam Talal’s wife whispered to him with agitation, “who is he to speak of peace,” referencing the killing of Muslims by Hindus in India. Imam Talal whispered back to his wife, “you should be careful because some people are going to say the same thing about me when I speak.” The point brought home with a gentle smile, he then went on to speak of the need and the challenge to reach out to each other beyond stereotypes as the start of peacemaking.
Wearing the traditional hooded woolen robe of a Franciscan Friar, Father Joseph Nangle spoke passionately and poignantly of the historic sins of the Church against both Jews and Muslims, in his own way asking for the forgiveness of the Jew and the Muslim sitting next to him. Reflecting my own commitments drawn from Jewish sources, he went on to speak of the activist way of pacifism, as it is rooted for him in Christian tradition. His words formed a natural bridge to my talk. Looking back to the recently read Creation story at the beginning of a new year’s Torah reading cycle, I sought to convey the underlying ethos of Torah and life as it flows from the very first words of the Torah, from the first moments of Creation, v’ru’ach Elokim m’rachefet al p’nei hamayim/and the breath of God hovered over the face of the waters. The world begins in a moment of utmost gentleness, simply as a breath upon the waters. In every moment of creation continuing to unfold, that gentleness offers a vision of the future toward which we strive, and the way of our own being in the world if we would arrive at that time.
In the printed program for the evening, words written by one of the organizers offer a natural bridge from the creation story to the following week’s Torah portion, the story of Noah and the flood. It is a bridge from the hope of creation’s beginning to the horror of violence that comes to fill the world, destroying people, animals, the earth itself, “we are now being challenged to reach out beyond humanity, because violence is being visited on God’s creation as well. There is an ever-growing consciousness in all religious traditions that respect and peaceful relations must be fostered not only between people, but also between humans and all creatures as well.”

That is what lies at the heart of the story of Noah and the flood, a warning that if we do not recognize and embrace the common bond that joins all life then life shall not be sustained on this earth. The ark itself, rising upon the flood waters, becomes a symbol of wholeness, all species living together, eating of the same food, the wolf and the lamb and the little child to lead, a reflection of the garden that was and that yet might be. Of the rainbow in the sky, formed of tears and light intermingled, a sign of God’s covenant made with all creatures, with people and animals, and with the earth itself, God’s promise never to destroy the earth again. And God continues to wait and hope for a sign from us, that finally we too shall make the same promise.
Rabbi Victor H. Reinstein
Posted by Carl Kline at 8:00 AM