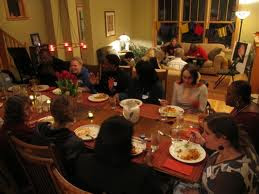 I recently attended an “Amazing Faith Dinner.” The meal was sponsored by a local interfaith group called Global Interfaith in Action (GFIA). The theme of GFIA is the Golden Rule. Positively stated it enjoins us to “Do unto others as you would have them do unto you,” and negatively, “Do not do to others what you do not want done to you.” In one form or another, this rule is found in all major faith traditions. One of the goals of GFIA is to promote interfaith dialogue by creating opportunities for people to live in the spirit of the Golden Rule. The Amazing Faith Dinner is such an occasion. The dinner that I attended in November was a first for me. The following is a report about what happened during the evening. I offer this account in some detail with the thought and hope that others may replicate this gathering in other communities.

The plan is simple, which is its charm. GFIA selects a host for the evening and provides the meal and a facilitator to guide the discussion that occurs as the dinner is shared. The dinner is kosher and vegan. The meal and time for sharing is two and one-half hours. The setting is a private home. Everything is done to make the setting inviting and the guests comfortable. GFIA extends an open invitation to the dinner on its website and then selects the hosts, facilitators and guests for each household. I did not know the name of the host until a few days before the dinner. I met the other guests and the facilitator at our host’s home.

When I arrived at our host’s home at the appointed hour of 6:30 two other guests were already there. We sat in the living room and exchanged greetings and pleasantries while waiting for others to arrive. Soon the facilitator for the evening joined us. We were told that two or three of the people who had planned to join us for the evening had sent regrets. This meant that our group was two Moslem women, me and our facilitator. The couple hosting the evening had not planned on participating in the meal or the discussion. We quickly agreed that everyone would be welcome at the table, including the teen-age daughter of our host couple.

After we were seated around the table, our facilitator began the conversation by asking each of us to introduce ourselves. One of the women wore a hijab. She was Syrian by birth and has lived in the U.S. for twenty years. She and her husband own a popular restaurant that we all knew and frequented. The second guest introduced herself as a Moslem but she did not wear a hijab. She told us that she and her former husband were divorced. Our hostess, the daughter of a Christian minister, identified herself as a Christian but she allowed that she had many questions about the church and about Christianity. Our host identified himself as non-religious. Their teen-age daughter said that she thought the Golden Rule was a good thing. Our facilitator identified himself as a member of the Church of the Brethren. He said he was attending seminary on line and preparing to become a pastor. I introduced myself as a retired Christian minister. We were an eclectic group. The facilitator was the only one who had participated in one of these dinners previously. It was a new experience for all the rest of us.

Introductions completed, a stack of three-by-five cards was placed on the table. Questions were written on each card. We were instructed that each person at the table would take a card in turn and have five minutes to answer the question while the rest of us listened attentively. There would be no discussion during or after each speaker. The questions were open-ended. “What does faith mean to you?” “Do you think doubt is the opposite of faith?” “Do you believe in miracles?” “What has your faith been important to you?” “Do you meditate or pray?” Because our group was small, we were able to have two rounds of questions. The last half-hour was open for general conversation. At the end of the evening we were asked to fill out an evaluation form and on a separate card asked if we would consider hosting or facilitating a dinner in the future. 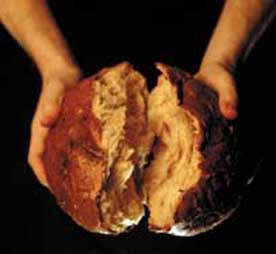 I have participated in interfaith panels and discussions in the past, but this evening was one of the most intimate group conversations that I can recall. The design of the evening was simply to have us to break bread with people from other faith traditions and enjoy a conversation, and to do this in a private home with a limited number of people. At the end of the evening we exchanged emails and facebook information and agreed that we want to continue to meet together in each other’s homes.

Obviously our group was self-selected in the sense that each of us chose to participate in this dinner, but there were no preconditions. I believe that in total there were probably eight to ten dinners that evening. Each dinner probably had six to eight people. I think this is the second or third year for the Amazing Faith Dinner, but I have not checked with GFIA about either the total number of participants or how many years they have sponsored this event. The plan is simple in design and relatively easy to implement. Bon appétit,