A Sukkah Among the Tents 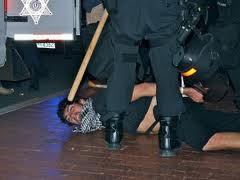 It has been a hard week to sit in the sukkah, the harvest booth that is the central symbol of the Festival of Booths. The blustery winds and the driving rains of autumn have been discomforting. In a mundane way, our hope for the weather as we would like it to be and living with the weather as it has been is ironically instructive. It is about living with the tension between the ideal and the real. This is exactly what the sukkah is meant to teach, how to live in the world as it is with the faith that we can yet see and help to bring the world as it might be. Though learning to persevere is no small lesson, in regard to weather there is little we can do to make change. In regard to social realities as they are and as they might be, there is much that we can do.

Change begins with the faith that change can happen, that we are not stuck where we are, either as individuals or as a society. The Zohar speaks of the sukkah as tzilah di’m’heymanuta, “the dwelling of faith.” As one great dwelling place, pulsating with themes of Sukkot, the faith that change is possible fills the air at “Occupy Boston.” Tents neatly arranged in ordered formation, one so close to another, I thought of the camp of Israel dwelling in sukkot along the way of the desert journey from slavery to freedom. For all of the winds that have torn at their tents and the driving rains that have soaked them, there is among 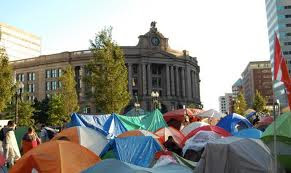 the encamped a pervasive sense of hope before the harsher storms of social and economic disparity that have brought them together. Marking the perimeter at one end of the camp is a fragile sukkah of bamboo poles and of colorful fabric fluttering joyfully in the breeze. The entire structure sways in time to the wind, its strength found in the love and commitment that built it. The utter fragility of all these dwellings of faith united in common purpose underscores the illusion that a fractured society can find strength in brick and mortar.

Some four hundred years ago, Rabbi Isaiah Horowitz, known as the “Sh’loh,” an acronym from the title of his book, “Sh’nei Luchot Ha’b’rit,” looked around at the excesses of his day and wrote, “my heart burns whenever I see people building houses to be like the castles of princes…, as though it will be forever…. If God gives you great wealth, build houses according to your needs, and not more….” Excess has become an American way of life that undermines the common good. If heeded, the advice of the Sh’loh offers a way to furrow wealth back into the society from which it comes, rather than using it to fund excess.

Engaging in tzedakah as the pursuit of justice for all, enriching the 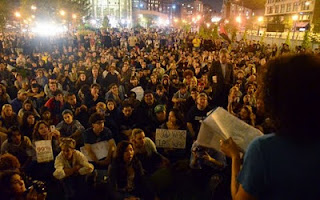 soil and psyche from which collective wellbeing grows, those with more can become leaders in the way to a healthier society for all. Rather than identifying the “one percent” of highest earners as evil, our challenge is to make common cause. Giving more of one’s own if one had more to give was the way of the farmers of ancient Israel. Offering perspective and critique on our own tax debate, Rabbi Samson Raphael Hirsch writes from nineteenth century Germany, “concern for the welfare of one’s needy neighbor was seen as a direct result of the landowner’s enjoyment of his own harvest before God; the Jew was taught not to rejoice in his personal happiness before God without first having done everything in his power to give practical aid to his less fortunate brother.” Generosity and concern for the common good were affirmed as a mark of pride, the farmer stating on completion of the “poor tithe,” a tax of ten percent, “I have rejoiced and I have also given joy to others.” As a harvest festival, Sukkos was a time of such pronouncement. 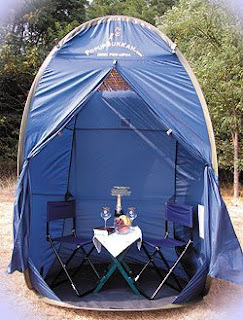 Like Shabbos, Sukkos represents a vision and a way, a path of ordinary deeds leading toward the “day that is all Shabbos,” the time when a great “sukkat shalom,” a sukkah of peace, will embrace the whole world. Welcoming guests, inviting others to share from one’s own bounty is the way of the sukkah. It is the way modeled by the basket of apples from which all may take at the entrance to the ingathering that is Occupied Boston. Critiqued for not having a detailed plan and clear goals, the overarching goal of those occupying public space in our cities is very clear. It is to create a more just, equitable, and peaceful society. Gathering in witness to what is wrong and to what might be, those faithfully dwelling in the public sukkah are offering an invitation for all to join together in finding the way. As we leave the sukkah and arrive at Parashat B’reishit, the Torah portion of Genesis, it is time to begin.