Reflections on the 23rd Psalm 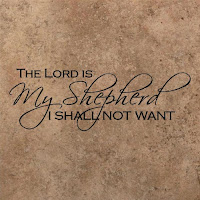 The 23rd Psalm is without a doubt one of the best known and most memorized and most frequently recited passages in the Hebrew and Christian Bibles. It offers solace to the hungry (“thou preparest a table before me”), rest for the weary (“thou leadest me beside still waters”), and hope for those in despair (“yea, though I walk through the valley of the shadow of death, I will not fear for thou art with me"). Visions of the Garden of Eden abound. The psalmist seems to be telling us, “These are hard times, but hold on to hope, better days are coming.” But what if there is more to it than this?

I'm reading this psalm again as the "99 per centers" continue their demonstrations on Wall Street and around the county, the drive to circulate petitions to recall Governor Scott Walker in Wisconsin gains momentum, and people are organizing in communities all across America. They are doing so in the face of the determined opposition of some political leaders, the steadfast refusal of some segments of the media to cover the story, and the stubborn indifference of certain financial establishments. I tell my wife that the "1 per centers" would like us to believe that we have the right to be poor but we do not have the right to protest about the fact that we are poor.

Reflecting on the 23rd Psalm, I recall a sermon by Dr. Martin Luther King, Jr. On January 1, 1956, as the boycott in Montgomery, Alabama, was entering its second month and a new year was dawning, Dr. King reached for words of hope as he prepared his sermon. He did not, however, turn to the 23rd Psalm. He opened his Bible to the Letter of Jude and read these words, “To him who is able to keep you from falling and to present you before his glorious presence without fault and with great joy—to the only God our Savior be glory, majesty, power and authority, through Jesus Christ our Lord, before all ages, now and forever more! Amen.” The title Dr. King gave to his sermon on that January morning was “Our God is Able.” He told members of the congregation, “God is not incompetent . . . . God is able to beat back great mountains of opposition.”

Years later, in preparation for the 1968 Poor People’s Campaign, Dr. King called for an “economic bill of rights for the disadvantaged” and for a national program that would abolish unemployment and establish a supplemental income program for those whose earnings were below the poverty level. In this same article ("Showdown for Nonviolence"), he proposed a national health care program and an end to investment in an immoral war, which, as he saw it, was diverting money from social programs.

Now, as I see it, people of faith are confronted with a problem. If, as Dr. King said, God is not incompetent, but able; and if, as the Psalmist assures us, God is actively going before us—preparing and leading—and walking with us, how do we reconcile our faith in this God with the plain fact that 99 per cent of us are on the street while 1 per cent of us is in the penthouse? The Occupy Wall Street website says, "We are the 99 percent. We are getting kicked out of our homes. We are forced to choose between groceries and rent. We are denied quality medical care. We suffer from environmental pollution. We are working long hours for little pay and no rights, if we are working at all. We are getting nothing while the other 1 percent is getting everything. We are the 99 percent."

How might people of faith reconcile the reality of the 99 percent with the vision of the 23rd Psalm? I find the answer to this question in the first verse, “The Lord is my shepherd, I shall not want.” Americans have subscribed to the myth that utopia, a world without want, can be realized if we each pursue our private dreams. This myth tells us that an abundant life that satiates all our wants and desires is possible if we only focus on what it is we want for ourselves. The psalmist is not against personal responsibility, but as I read it, the psalmist defines this myth not as utopian but its opposite. It is anti-utopian, leading not to personal fulfillment but to the destruction of the common good. With its opening line the psalm debunks the picture of a perfect world in which personal whims and private greed are satisfied. Rather, “The Lord is my shepherd, I shall not want” means that abundance is found in respecting relationships and in honoring our commitments to each other.

In a world in which the pursuit of wealth is widely regarded as the most important thing, and human beings and relationships are transformed into commodities to be used to satisfy personal desires, we who are people of faith say with the psalmist, "The Lord is my shepherd, I shall not want." That is to say, greed is not our guide.

My next contribution to LivingNonviolence will follow this line of thought with reflections on a proposal being offered by the World Council of Churches that we should establish a “greed line” as well as a “poverty line.”