The High Price of Gold 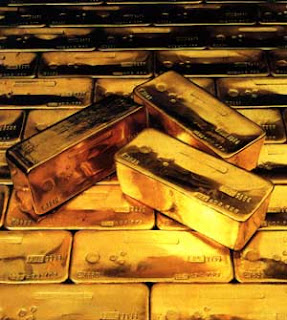 We have all heard the news. Gold is trading at $1800 an ounce, up from $600 just five year ago, and some predictions say it may go to $5,000 an ounce. Now is the time to bring your jewelry, watches, coins, even your dead relatives gold fillings down to the local dealer who wants to pay you “top dollar” for your “old” gold. Not long ago some pundits and politicians wanted to sell the gold in Fort Knox to pay down the national debt. All this talk about gold made me curious. I wanted to learn more. I am no expert on the subject that’s for sure, but a little research on the internet proved even more rewarding than a trip to the pawn shop.

Barrick Gold Corporation is the world’s largest gold producer. According to the company website, their goal is “to be the world’s best gold company by finding, acquiring, developing and producing quality reserves in a safe, profitable and socially responsible manner.” The company’s 2010 Annual Report (available on the website) gave investors the reassuring news that with higher gold production and lower total costs, Barrick achieved record financial results. Reading on in that Annual Report, I learned that the company mined 3.1 million ounces of gold in North America in 2010 at a cost of $489 per ounce. The company projects that it will mine 3.3 to 3.46 million ounces of gold in North America in 2011. The Cortez Joint Venture (in the Cortez Mountain Range, Nevada) yielded 1.14 million ounces of gold in 2010. The company says that it plans to take even more gold from the mine in 2011. It is the third largest gold producing mine area in the world and Barrick owns 60 percent of it.

The mine is located on land that up until 1946 was owned by the Western Shoshone Tribe. The Ruby Valley Treaty of 1863 (also known as the Treaty of Peace and Friendship) acknowledged Indian ownership of the land, but gave mining rights to non-Indians. In 1946 the Indian Claims Commission extinguished Indian title claims outside recognized reservation areas, thus nullifying the treaty of 1863. The Western Shoshone argue that the 1863 Treaty of Ruby Valley recognized Mount Tenabo (the highest point in the range and an ancestral site) and the Cortez range as their land and they have never relinquished ownership of it. In spite of efforts by the Nevada state legislature to privatize the land, and attempts by the federal government to buy the land and the government’s abuse of the land, the Western Shoshone have consistently argued that this is their sacred land.

Since Barrick began mining in the area, two gold mines have petered out. In order to keep the Cortez mine going, the company pumps between 20,000 and 30,000 gallons of water out of the mine every day, 365 days a year. The Western Shoshone say that as a result of all this pumping the water table is dropping and the aquifer is being contaminated. The Business and Human Rights Resource Center reports that on November 20, 2008 the Western Shoshone Tribe and several non-profit organizations filed a lawsuit against the Bureau of Land Management to stop Barrick Gold from proceeding to develop “the largest open-pit cyanide heap leach gold mine in the U.S.—the Cortez Hills Expansion Project.” The expansion project includes Mt. Tenabo. On January 20, 2009, a district judge recognized that the project would “desecrate the mountain and decrease the tribal members’ spiritual fulfillment.” Nonetheless, the judge denied the Indian claims and ruled that the financial cost outweighed the religious considerations. The Shoshone filed an appeal and on February 6, 2009, the US Court of Appeals for the Ninth District granted a temporary restraining order protecting an 8 mile radius around Mount Tenabo. Barrick Gold responded to this development by filing another appeal. In June 2010, the Ninth Circuit Court of Appeals ruled in favor of the company. The US government now classifies 90 percent of the land as public land. 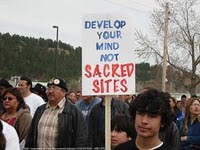 Tim Crowley, President of the Nevada Mining Association, testifying before the Nevada State legislature on February 14, 2011, told the legislators that the mining companies directly employed 11,600 people in Nevada in 2009, and the companies paid $204 million in state taxes that year. In his testimony, he also pointed to an 1875 Nevada law that gave private companies operating for a public purpose the right of eminent domain. According to the law, mining is recognized as a public use of the land. Therefore, mining companies have the right to take un-used land, or land that is not being used for a public purpose, and use it for a public purpose. Under the provisions of this law, the mining company has the right to mine Mount Tenabo. The state legislature took a dim view of the idea of granting a private company the right of eminent domain. Legislation was introduced to repeal the 1875 law, and on April 29, 2011, the Governor of Nevada signed into law Senate Bill 86, ending the right of private companies to use eminent domain. However, this has not slowed the Barrick operation, which is moving ahead at full steam. The company reports that net earnings for the second quarter in 2011 rose 35 percent to $1.2 billion, compared to $859 million for the same period one year earlier. Second quarter gold production was 1.98 million ounces at a total cost of $445 per ounce, net cash cost was $338 per ounce.

In a final irony, the Barrick Gold website has a link to a March 17, 2011 company news release which extols “Sustaining a Native American Culture: Barrick Supports Shoshone Language Preservation Program.”