As Branches of a Great Tree 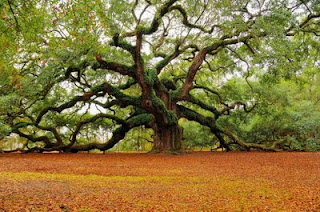 In the searing heat of a summer’s mood that tests our own, shimmering haze blurs reality. What is real and what is a mirage, as of water upon the road? Where is summer’s beauty, and how shall we understand pain in its midst, able yet to find solace? How quickly we thirst and tire, reaching then for the hand of another, and for a staff to hold and find support, realizing we are joined to each other as branches of a great tree, shelter from the heat both given and received.

Held in the intricate web of one word, these are the questions that emerge from the beginning of the Torah portion Mattot (Numbers 30:2-32:42). The plural for “tribes,” as in Moses speaking to the heads of the tribes, mattah is the singular. It is a fascinating word that suggests much more than a gathering of people joined through bloodlines and history. Mattah also means branch, or staff, or rod. As for each person within the tribe, so for the tribe itself, all are part of a greater whole, each but a branch in a majestic tree, the tree of a people, of humanity, the tree of life. Each one as a branch becomes a staff to support another along the way.

As the portion Mattot unfolds, there is no tree to give of its shelter, no place to hide from the searing heat of violence and brutality. Moses is told to take vengeance upon the Midianites for leading Israel astray. We come back to the same root that offered shelter and support, realizing now that it can also mean to deviate, to distort, to turn aside, as from the true path. It is not that we are led astray, we turn aside, so easy to blame others. Turning to violence, wreaking vengeance, this is the turning aside that still waits for return in the world today. The very one we would harm is another branch in the same tree who is meant to be the rod and staff of our return to the path of life. It is not clear in context, and so the commentators wrestle, whose vengeance is it to be, God’s or Israel’s? In the space of ambiguity, is one or the other saying no, do not do it? Or, in the timelessness of Torah, is it about us, and never ending cycles of violence and revenge, the text a mirror in which to see and be horrified?

How could Moses harm the Midianites, having found refuge among them when he fled for his life from Egypt? His wife, Tziporah, was a daughter of Midian, and her father, Jethro, a Midianite priest, was Moses’ beloved mentor and guide. There is indication in the text that Moses stepped aside and did not join the battle against Midian. A beautiful teaching in the ethical tradition of Musar says, it is not in the realm of justice for a person to bring distress upon someone who has done an act of goodness for them/she’y’hey maytzar l’mi she’asu lo tovah, and surely, Moses was raised in Midian.

So ubiquitous is the distress and pain brought by one person or people upon another. There is also so much goodness that shines through the darkness. In the Jewish calendar, we first enter a time of darkness amid the brilliant light of summer, followed by a period of comfort in which hope is nurtured. With the seventeenth of the mid-summer month of Tammuz, we enter a period of three weeks that bring us to Tisha B’Av, day of mourning and fasting for tragedies that have befallen the Jewish people. Through the lens of our own being and experience we look to the tragedies experienced by others, in the past and in the world around us now, reaching out and crying together. In the midst of summer, we strain not to lose sight of beauty and goodness. The period of the “Three Weeks,” as they are called, is also referred to as Beyn Ham’tzarim/Between the straits. As at Passover time, when we seek to come through the narrow places, the straits that hold us in, that is our challenge now as well. Not to cause pain, distress, meytzar, to one who has done an act of goodness for us, that was Moses’ challenge. It is also our challenge, brought into focus during the weeks between the straits, not to look at the world with narrow vision, keeping others and ourselves in such narrow straights that there is no room to reach for or extend a hand, to be the staff to guide each other out into the light. As we find our way through the darkness of destruction and despair, from the day of mourning that is Tisha B’Av, we enter the “Seven Weeks of Comfort,” which bring us to the edge of the new year, opening us to the possibility of renewal. 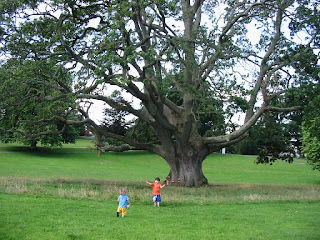 Looking ahead to the weeks of comfort, the Slonimer Rebbe says of the summer days between the straits, they are as the furrowed ground from which shall begin to blossom the great light revealed. Looking beyond the haze of summer’s heat, may we see in that pure light, no longer a mirage upon the road, the tree of many branches that joins us all as one.

Hi I came across this blog by accident, and what I really like to know is where can I find such amazing Tree, I'm refering to the first picture!
If you please could answer me?! :)