Standing for Peace and DU238 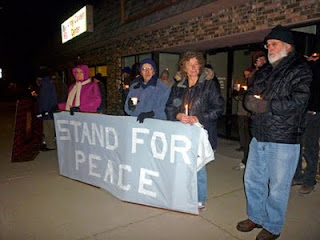 When I lived in Brookings, South Dakota, I had the joy and privilege of joining a band of friends who stood for peace every Sunday afternoon at 1:00 p.m (and a few other times as in this picture). Sometimes there would be only a handful of us, at other times a couple of dozen stood together behind our banners which said, “Stand for Peace.” Rain or shine, winter and summer, every season and every Sunday we stood for peace. This band of friends had been doing this for two years before I joined them and they are still standing for peace. Although I have moved away, I am glad for their faithful presence and for the opportunity to stand with them.

The Stand for Peace gathers on Main Street. At first we stood right outside the entrance to the Military Recruiting Center, which is closed on Sunday, later we moved to stand in front of the store next to the recruiting center to accommodate the concern of some members of the public. Members of the Stand for Peace come for different reasons and from different faith traditions. During our fifteen minutes of silent witness, we each held our own thoughts and prayers. My attention often turned to the recruiter and to lives and families of those whom he recruited and to a relatively new weapon in America’s ever expanding arsenal: DU 238. 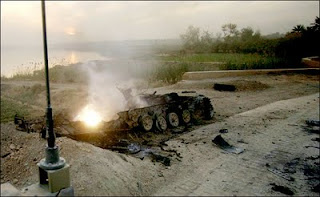 DU 238 is diluted uranium 238. The number refers to the isotope. It is part of the waste produced by nuclear reactors. It has civilian uses and is found in a number of commercial products where its presence is perfectly safe and its use is beneficial. But it also has military uses because of two unique properties: it is a very heavy metal, and it is pyrophoric. Because DU238 is very dense, it can pierce tank armor. Because it will ignite on impact at relatively low temperatures and burn at temperatures between 3000 degrees and 6000 degrees centigrade, it is extremely lethal. Once it pierces tank armor, a DU weapon, known as a “kinetic energy penetrator,” will ignite and burn everything and everyone in the tank. Although it is difficult to document the use of this weaponry, researchers believe that DU 238 is used in bunker buster bombs, missiles fired from aircraft, and as coating on ammunition. It is widely believed it is being used in the war in Afghanistan.

The U.S. Department of Defense and the Rand Corporation have published studies stating that there is no evidence linking cancer or any other negative health effect to the radiation received from exposure to depleted uranium. The NATO Secretary General Lord Robinson issued a similar finding in 2001, as did the International Atomic Energy Director Pier Roberto Danesi in 2002. However, evidence to the contrary is mounting. The United Nations has asked member states to provide data on the quantity and geographic location documenting the use of DU238 weaponry.

Independent researchers have discovered the first use of DU penetrator weapons was on test ranges in Hawaii in the 1960s and 1970s. The first use of DU weaponry in a combat theater was in the 1991 Gulf War. Opponents of the weaponry contend that use of this material in “conventional warfare” is a war crime and a violation of several international treaties banning the use of nuclear material in conventional wars. Nonetheless, DU penetrator weapons are believed to have been used in the war in Bosnia, Serbia, and in the 2003 invasion of Iraq. Independent researchers estimate that in one three week period in the Iraq war in 2003 one thousand tons of DU munitions were used.

In addition to its deadly effects on the battlefield, DU weapons pose three health hazards: chemical toxicity, radioactivity, and fumes. When DU 238 burns it creates toxic dust that is carried by the wind. The dust can be inhaled or ingested. Tiny fragments of DU weapons, shrapnel, can also be ingested and lodge in the body. A documentary film on depleted uranium, Uranium 238—The Pentagon’s Dirty Pool” produced by Pablo Ortega for the San Jose Quaker Peace Center won the award for best short film at the International Uranium Film Festival in May 2011. The documentary and film festival are part of a global initiative to ban the military use of DU 238. The film makers tell us, “DU is not decaffeinated coffee.” It has a half-life span of 4.5 billion years.

DU is a toxic metal that attacks vital organs of the body. Independent research shows that DU 238 causes leukemia, and has genetic, reproductive, and neurological effects. The chemical toxicity is about one million times greater in vitro than its radiological effects. A 2001 study of 15,000 U.S. Gulf War combat veterans and 15,000 non-combat veterans found that Gulf War veterans were 1.8 (fathers) and 2.8 (mothers) more likely to have children with birth defects. Female Gulf War veterans were found to be three times more likely to bear children with birth defects than their non-Gulf War counterparts. Studies in the UK and in Basra, Iraq have also reported sharp increases in leukemia and in the genetic malformation among babies born after the Gulf War. In 2004, Iraq had the highest mortality rate due to leukemia in the world. Medical reports also show an increase in infant mortality in Falujah after the Gulf War, although the U.S. Department of Defense has stated that it did not use DU 238 weaponry in that battle.

Belgium is the first country to ban the military use of DU. In April 2009, the Belgium Senate voted unanimously to restrict investments by Belgium banks in the use, production or procurement of DU weapons. In September 2009, the Latin American Parliament passed a resolution calling for a regional moratorium on the use, production, and procurement of DU weapons. In October 2010, the United Nations First Committee passed a draft resolution calling on member states to provide quantitative and geographic data on the use of DU weapons.

You can take action by joining with the efforts of one of the organizations below, contacting your decision makers, starting a study group in your community to learn about DU 238, and standing for peace.

International Action Center www.iacenter.org, founded by Ramsey Clark in1992. I did not cite, Helen Caldicott, Metal of Dishonor, published by International Action Center, 2007. I first became aware of DU weaponry when reading her book, Children of Iraq. In 2001 Dr. Caldicott founded the Nuclear Policy Research Institute (NPRI). NPRI published Depleted Uranium: Scientific Basis for Assessing Risk in 2003. The publication is available on line at http://www.helencaldicott.com/depeleted.pdf.